Everything Is Under Control: A Memoir with Recipes 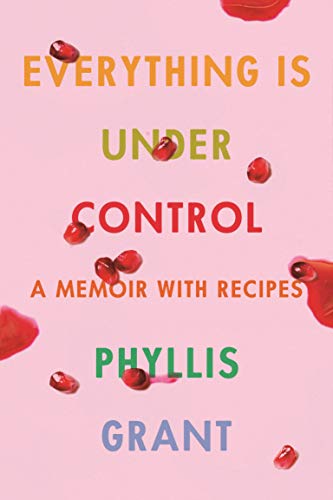 “Grant’s stark, spare memoir feels like the literary equivalent a few bold slashes of color across a canvas.”

Phyllis Grant has written a memoir relatively early in her life. The freshness of her memories from young adulthood make for vivid descriptions of the rights of passage often glossed over by authors with greater distance. She writes about the humiliation of unwanted advances at work, the intense pain of childbirth, the euphoria of finding her life’s calling, and the subsequent despair of realizing she was wrong.

Everything Is Under Control offers brief but powerful flashes from Grant’s time as a dancer at Julliard in New York City through to her family life with two young children in Berkeley, California. She tells her story through its emotional turning points: leaving home for college, finding the love of her life, leaving the dance world for restaurant work, and becoming a mother.

Grant’s writing pulses with the intensity of one’s twenties and all the yearning, passion, and searing disappointment that fills those years. As she passes a restaurant back door in a New York City alley, she thinks, “I want my hair to smell like chocolate and garlic and fish. I want to lean in and carefully place the roasted beets next to the potato puree. I want a purpose.”

Her love of food is a throughline in the book. As a child, she watches her grandmother cook, and in her early days at Julliard she gorges herself on New York City’s culinary delights. Finally, she makes the leap to working in restaurants as a pastry chef and garde-manger.

When the grueling restaurant world spits her out, she cooks on her own terms for her husband and children. She clearly delights in the smells, textures, and emotions of cooking. It serves as a soothing pleasure and healing balm in her house.

When she cooks dinner for her husband after they fight, “the meat cooks all day, the smells get sucked into the wall-to-wall carpeting, the sofa, the winter coats. Meat is under my fingernails. Fat drippings speckle my boots. We fill warm tortillas with the spicy meat, cabbage salad, jalapeno pickles. We splash it all with crème fraiche.”

Grant’s struggle with postpartum depression creates the most jarring and difficult moments in the book. She describes a descent into mental illness after the birth of her first child that includes thoughts of violence toward her baby. “Images pulse in my head, violent flashes in which I smash her brain with a flashlight. . . .”

After she emerges from the dysphoria of new motherhood, she tries relentlessly for another baby. Against all odds, she gives birth again, only to feel the same horrible despair engulf her. Now, as the mother of a difficult toddler and a newborn, she writes, “My screaming babies are always with me.” She describes standing upside down in a hot shower to try to escape her mental anguish.

The book closes with recipes that have appeared in her stories, food that she makes for her family with skills honed in restaurants. As one might expect from a chef, she provides detailed, precise instructions and multiple variations of the dishes, from avocado bowls to caramelized onion tart with anchovies and olives. She also includes desserts like hazelnut butter cookies and strawberry balsamic tart.

Grant’s stark, spare memoir feels like the literary equivalent a few bold slashes of color across a canvas. She briefly touches on loaded topics that could be books unto themselves: the culture of elite female dancers, being a woman in the restaurant world, coping with infertility, and surviving postpartum depression.

Grant illuminates the human condition in sometimes breathtaking ways—readers will surely see themselves on these pages—but she fails to fully reveal herself. Offering only the gut punches of a life story is a difficult way for an author to build rapport with readers. Grant’s book leaves one wondering if she is likeable, if she has a sense of humor, if anything embarrasses her. One finds oneself wanting more, which is not necessarily a bad thing—in a book or a meal.