Rudy's Rules for Travel: Life Lessons from Around the Globe 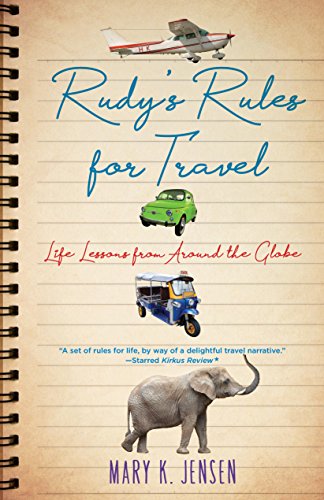 Rudy’s Rules for Travel, a slim memoir written by Rudy’s wife, Mary Jensen, offers vignettes from the couple’s trips to far flung destinations from Mexico to Bali. Jensen portrays herself as the long-suffering wife of a man who rushed headlong into dicey situations with little planning, preferred to vacation on the cheap, and would rather camp out in the dead of winter to experience New Zealand’s natural beauty than book a hotel.

Rudy’s travel philosophy, which Jensen details in list form, included rising at dawn, washing his clothes in the shower, and buying only the tiniest souvenirs that would fit in a small carry-on (the only luggage permitted). Jensen grew up taking family vacations to the beach half an hour from her home. Her life with Rudy, a World War II veteran 22 years her senior with a passion for authentic foreign experiences, challenged her idea of travel while seriously aggravating her anxiety.

Rudy drove the bus in this relationship, letting his wife have a say in their travel arrangements only occasionally. Still, Jensen seemed devoted to her husband—often inexplicably—as he led them into countless scrapes. Jensen describes his change from school principal during the year to adventurer over the holidays as “not unlike that of Clark Kent to Superman. He exchanged suit and tie for battered jeans, faded navy captain’s hat, plaid shirt, and backpack, leaving razor and dress shoes scattered behind.”

The short chapters center around mishaps or scary moments precipitated by Rudy’s adventure-seeking, poor research, or just bad luck. In many stories, Jensen employed deep breathing and shot panicked looks at Rudy, who tried to put a positive spin on the calamity.

In one typical scenario in Thailand, Rudy found a real bargain on an elephant ride—the last one of the day. Unlike the other patrons, who rode in an enclosure, they discovered they were riding the elephant home, two hours over steep hills, through streams and forests. The ride ended without incident except for damage to the author’s nerves and muscles.

Jensen’s stories would be more satisfying if she had better developed her two main characters. She drops crumbs of insight into Rudy’s background but never enough to create three dimensions. Her own background and motivation receive even less attention.

The question that often comes to mind is, “Why does Jensen put up with this?” We never understand what bonded these two and why Jensen tortured herself with Rudy’s style of travel, which despite his vast experience never seems particularly savvy. In one instance, they arrived late at night in the driving rain on a Thai island where Rudy had made reservations at a hotel that hadn’t been built yet.

Because most of the stories focus on a predicament—a unnerving helicopter ride, armed soldiers boarding their tour bus—we get little flavor for the varied places Jensen visited. A welcome exception is Russia, where the couple went in the 1980s, and to which the author devotes more detail. Jensen describes the tightly controlled hotel where they were not allowed to switch rooms, and a “key monitor” sat in the hallway to keep guests’ room keys when they went out. “A light fixture in each room hangs low and is mysteriously connected to the concierge service—when we talk to each other about how cold the room is, the phone rings and the operator inquires about our number of blankets.”

While the similar pattern to each story and the scant context of country or character can frustrate, Jensen intends for this book to be funny, and sometimes it is. In one of Rudy’s bigger failures in planning, he organized a shore excursion in Tahiti in rebellion against their cruise ship’s expensive, touristy ventures. “With fanfare, our driver/guide parks along the side of the road, opens a weathered shed, and pulls out a worn, white plastic chair for each person, arranging us in a precise half circle facing a tall palm tree. We are, he tells us, lucky to be here today, because today is the day. Today the island gets its first satellite dish put up on the tree, and we have the best seats.”