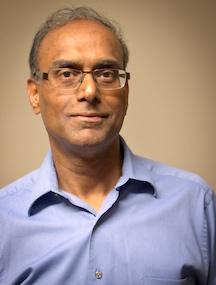 Murali Kamma is the managing editor of Khabar, an Atlanta-based magazine for Indian Americans. His debut book, Not Native: Short Stories of Immigrant Life in an In-Between World (Wising Up Press), won the 2020 Bronze Independent Publisher Book Award (IPPY) for multicultural fiction. Nineteen of the twenty stories in this collection, which focuses on Indian immigrants, were previously published, often in different versions.

After graduating from Loyola College in India, he continued his education at the State University of New York at Buffalo. He belongs to what the Cuban American sociologist Ruben Rumbaut dubbed the 1.5 Generation—meaning, he embraces the hyphen wholeheartedly. While he did dabble in fiction as a youth in India, it was his life as an immigrant straddling two cultures—and his work as an editor—that inspired him to pursue it more seriously. His stories have appeared in numerous journals, including Rosebud, South Asian Review, Lakeview International Journal of Literature and Arts, and Wising Up anthologies.

He has enjoyed interviewing Salman Rushdie, Anita Desai, and William Dalrymple, among many other authors. His columns have appeared in The Atlanta Journal-Constitution and India Abroad, and he received a Gamma Gold Award from the Magazine Association of the Southeast (MAGS).

Not Native: Short Stories of Immigrant Life in an In-Between World

“Migrations, if placed on the coffee table, may supersede the phone during a commercial break.

Run and Hide: A Novel

“Pankaj Mishra’s new novel is no less stimulating and insightful than anything else he has written, although there’s no tightly hewn plot here—and the drama that matters is internal.”

The Struggle for India's Soul: Nationalism and the Fate of Democracy

“In his sobering yet compelling book, Tharoor shows how in today’s India, where Hindu nationalists are firmly in power, a majoritarian mindset has supplanted the democratic mindset.”

The Dog of Tithwal: Stories

“Few fiction writers have captured the trauma of India’s partition as powerfully as Saadat Hasan Manto, called ‘the undisputed master of the modern Indian short story’ by Salman Rushdie.”

“There’s no magical realism in this debut novel set in multicultural London, but nevertheless a kind of magic propels this love letter to books and libraries.”

"For her book, Vijayan traveled about 9000 miles in the subcontinent's borderlands to show how nation-states can wreak havoc on the people who live there."

“Sathian, who writes with great assurance and verve, wields her pen like a magnifying lens to examine the foibles of immigrants who are high achievers but somewhat insular and insecure.”

Each of Us Killers

Is it better to read a story collection sequentially?

“Mishra’s astute and engaging book should . . . be seen as a warning.”