The Book of Everlasting Things 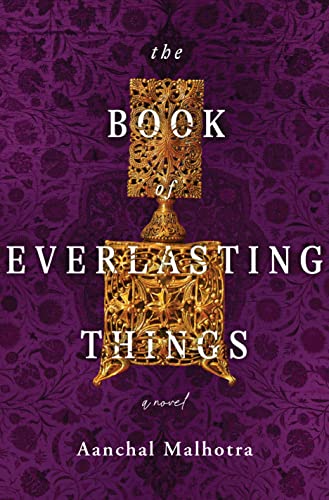 “The stories of two families—one Hindu, the other Muslim—are interwoven in Aanchal Malhotra’s lush debut novel, which spans almost a century . . . "

The partition of India, a seismic event that continues to reverberate 75 years later, is at the heart of The Book of Everlasting Things. It was a messy division, hastily done, and what followed seemed like a brutal civil war.

The author, born in 1990, has already done good work to honor Partition’s victims and survivors, including her Punjabi grandparents. She cofounded a digital repository called Museum of Material Memory, and wrote a lauded nonfiction book, Remnants of Partition: 21 Objects from a Continent Divided, which was inspired by her MFA thesis at Concordia University. It revisits—and memorializes—Partition by examining the personal items carried by refugees when they fled across the new borders.

As a fiction writer, she’s more ambitious. The stories of two families—one Hindu, the other Muslim—are interwoven in Aanchal Malhotra’s lush debut novel, which spans almost a century and takes readers from the age of empire to the age of democracy and discord. Some may find the novel too long—and at times, the teeming descriptions and tangents can impede the narrative momentum. But Malhotra, whose family in Delhi owns a well-known bookstore that her grandfather founded 70 years ago, writes beautifully, and patient readers will be immersed in a bygone world of kaleidoscopic scenes and fervid emotions. She puts her training as an oral historian to good use, bringing the past to life on the page. There are telling details, especially when she’s writing about perfumes, which play a central role in the saga. For example: “As winter arrived, the floral, fruity, green, light ittars, popular through the hot months of the year, gave way to the voluminous, woody, resinous, leathery ittars like musk, saffron, oudh, and the herbaceous, spicy shamama.”

The tale begins in the walled city of Lahore almost a decade before Partition. Samir Vij, who belongs to a Hindu merchant family that deals with perfumes and textiles, is a child when he meets Firdaus, whose Muslim family is involved in the calligraphy business. The patriarch Som Nath Vij has two sons: Mohan and Vivek. Samir, who is Mohan’s son, learns perfumery from Vivek. Like his beloved uncle, who had gone to Europe to fight in the First World War, Samir develops an extraordinary ability to smell. This olfactory gift seems more potent than all the other senses combined. When Samir’s mother was pregnant with him, she tended to the tuberose crop until the delivery date. “It was her companion . . . as it subconsciously became yours,” Mohan tells him. But because smell and emotion are so intimately connected, Samir’s great boon, which brings joy and success, also becomes a burden.

Samir and Firduas, after starting out as friends, fall in love—but it’s doomed as Partition looms. Lahore, so vibrant and united till now, is gripped by anxiety as residents wonder which side of the border their city will end up in. “Since it was difficult to tell Punjabis apart, many Hindus had begun to wear a tilak on their forehead and Muslims the Jinnah cap. Newspapers advised Christians and Anglo-Indians to wear a cross as a mark of their identity.”

When Lahore goes to Pakistan, Hindus and Sikhs realize they no longer belong there, while Muslims from India flee in the opposite direction for the same reason. Samir’s world crumbles, literally, following a horrific incident. Disillusioned with both Pakistan and independent India, Samir heads west for a more adventurous second act, ending up in France, which his uncle had seen as a second home. The novel gathers speed, and readers soon learn about the next generation. But that doesn’t mean the past is forgotten. “Without memory, we are nothing,” Samir says to somebody close to him. The consequences are painful.

Samir, now a family man, makes startling discoveries about his uncle’s European sojourn. And Vivek’s carefully preserved journals reveal the consequential—though long overlooked—role of Indian sepoys in the First World War. “Bodies were scattered everywhere, whole or in parts,” reads one entry, referring to the trenches in Ypres, which Vivek calls Wipers.

Samir has remade himself, but that doesn’t mean he’s not haunted by what he lost. Before departing from the world, he gets a chance to leave a bequest, which is his “masterpiece composed as an homage, a tribute, a eulogy, a memory, a desire, a longing, a love.”