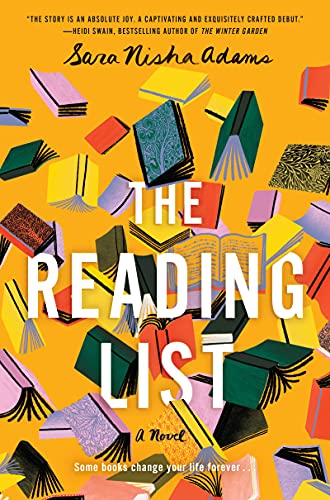 “There’s no magical realism in this debut novel set in multicultural London, but nevertheless a kind of magic propels this love letter to books and libraries.”

Believing that outstanding novels in hardcover or paperback—no e-books here, thank you—have the power to transform lives, and even be life-long companions, seems touchingly quaint in a fast-paced world dominated by gadgets, digital and social media, and streaming. But it’s far from quaint in The Reading List. Adams, a British Indian editorial director at a publishing house in London, uses that belief to shape her engaging story, which is set in motion by an anonymous reading list.

Mukesh and Aleisha are barely readers at first. What triggers their interest is the list, which Aleisha finds in a returned book at the struggling public library where she works in multiracial Wembley. This suburban town in London may be their home, but the lives of Mukesh—a retired Indian immigrant, recently widowed—and Aleisha, a teenager who seems unmoored after her father’s departure and her mother’s descent into depression, couldn’t be more different.

Mukesh is close to his three grown daughters, and he has a reassuring if narrow routine that’s centered on his community and their temple. Yet he misses his wife terribly. While he stuck to David Attenborough’s nature documentaries, his wife was a voracious reader—and Mukesh has come to the library to return The Time Traveler’s Wife, the last book she borrowed. Audrey Niffenegger’s novel, when Mukesh reads it as well, provides a comforting link to his late wife.

Books suddenly become a mysterious, inviting portal. Mukesh’s first encounter with Aleisha is not promising, given her insecurity and inability to recommend books. She took this summer job only because of her beloved brother, Aidan, a book lover who had worked at the library. But this list, which Aleisha gives to Mukesh on a whim, opens the door for friendship, and also helps him bond with his young granddaughter, an avid reader.

Only eight novels are listed on this piece of paper, and in a strange twist, copies of the list appear in other places. It becomes a talisman.

A recurring feature in The Reading List is the connection made between its characters and the characters in the novels they read. For instance, Mukesh’s vaguely flirtatious encounter with a woman at a temple event brings a pang of guilt because this woman, a widow, had been his wife’s close friend. Rebecca, the novel he’s reading, plays “havoc with his imagination,” as he recalls “the story of the new wife coming in to replace the old, living forever in the dead woman’s shadow.”

Would it help the reader to be familiar with Daphne Du Maurier’s suspenseful novel? Certainly, but it’s not needed because Adams provides enough context.

Sometimes the connection may seem less convincing, as when the focus shifts to Yann Martel’s Life of Pi, and occasionally the story teeters on the edge of sentimentality, even straining credulity. On the whole, though, the novel holds up well, and it comes as no surprise to learn that the author was partly inspired by the instant connection she found with her Indian grandfather through books.

The Suitable Boy, perhaps the longest single-volume novel in English, gets less attention than it deserves, but Vikram Seth’s tome plays a crucial role in unraveling the list-maker’s identity. The vividly drawn Mukesh, who blossoms when he steps out of his comfort zone, is a good foil for the vulnerable Aleisha, whose challenges at home make her a sympathetic character. Mukesh gets a new “granddaughter” even as he becomes closer to his real granddaughter, and this evolving relationship is inseparable from the books that unite them.

Aleisha identifies with Scout in Harper Lee’s To Kill a Mockingbird and Jo in Louisa May Alcott’s Little Women. The Kite Runner, Khaled Hosseini’s heartbreaking novel, teaches the value of friendship and why doing the right thing is never too late. Toni Morrison’s Beloved shows how community support is important when one feels helpless. And Jane Austen’s Pride and Prejudice is a guilty pleasure, reminding Aleisha of a love interest and Mukesh of his close-knit family.

There’s no magical realism in this debut novel set in multicultural London, but nevertheless a kind of magic propels this love letter to books and libraries.

But after a crushing tragedy, Aleisha turns against books and regrets “crying over people who didn’t even exist . . .” Mukesh gently tells her, “Please try to remember that books aren’t always an escape; sometimes books teach us things. They show us the world; they don’t hide it.”