The Dog of Tithwal: Stories 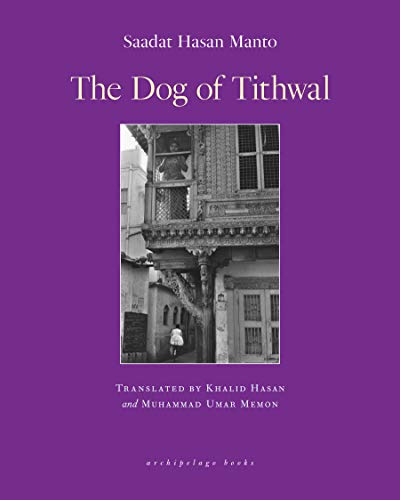 “Few fiction writers have captured the trauma of India’s partition as powerfully as Saadat Hasan Manto, called ‘the undisputed master of the modern Indian short story’ by Salman Rushdie.”

The bloody partition of the Indian subcontinent in 1947 is quickly fading from living memory, just like the horrors of World War II that preceded it. But the events have been carefully documented, and this grim history won’t be forgotten as long as people continue to read books, watch films, and visit museums.

The Dog of Tithwal, a collection of Urdu stories in English translation, is a case in point. Few fiction writers have captured the trauma of India’s partition as powerfully as Saadat Hasan Manto, called “the undisputed master of the modern Indian short story” by Salman Rushdie.

In a tragically short but astonishingly productive life, Manto straddled the split between India (where he was born and mostly lived) and Pakistan (where he succumbed to alcoholism at the age of 42). “There are stories here with an impressionistic interiority and ruefulness reminiscent of Chekhov,” notes the poet Vijay Seshadri in his preface. Besides Chekhov, who was 44 when he died, Manto has been compared to Poe, Maupassant—whose work he loved—and Gogol.

In the title story, bored Indian and Pakistani soldiers face each other in a pointless war—and when a dog appears on the scene, both sides become suspicious and engage in a surreal back-and-forth with the hapless animal. It’s amusing for the soldiers but not for the dog, which is called Jhun Jhun by the Indians and Shun Shun by the Pakistanis, as if they were code words. And the ending, despite the farce, is inevitably chilling. “Even dogs will now have to decide if they are Indian or Pakistani,” one soldier says.

The well-known “Toba Tek Singh,” in which the two newly independent nations agree to exchange “lunatics,” covers the same territory—or non-territory. Singh, who insists on going back to his village, ends up in a strip of no-man’s-land that could also be called, to borrow Gary Shteyngart’s title, Absurdistan.

Manto writes boldly yet concisely, as seen in these crisp translations, and his ability to create vivid characters is matched by a knack for building cinematic momentum. The endings often come like a punch in the midriff. But even an opening that relays information matter-of-factly can deliver a blow. “The Return,” which starts with the arrival of a passenger train, has this as the second sentence: “Many had been killed on the way, a lot more injured and countless lost.”

While Manto personally experienced the turmoil of division, he is not confined to that topic. He writes just as penetratingly about revolutionaries, prostitutes and pimps, wastrels, tongawalas and walis, soldiers, and thugs. If he’s a little melodramatic at times, it could be explained by his involvement with South Asia’s nascent film industry. Sometimes, in fact, the drunken shenanigans of filmwalas in his fiction come across as thinly disguised reports.

Manto is devastatingly cleareyed when he takes on religious fervor and hypocrisy. In a tale (“For Freedom’s Sake”) set during the Amritsar massacre of 1919, the narrator says, “Nigar was a woman, not a Muslim, Hindu, Sikh or Christian, but a woman.” Nevertheless, as seen in stories like “I’m No Good for You!” and “Two-Nation Theory,” love frequently cannot transcend barriers, even though a character in the latter story declares, “All is right in the religion of love.”

An equal-opportunity offender, Manto spares no sect. In “Babu Gopi Nath,” the main character tells the narrator, “There are only two places where my heart finds peace: prostitutes’ kothas and saints’ shrines.” Why? “Because both establishments are an illusion.”

Although Manto belonged to a conservative milieu and era, he wrote frankly about sex, which got him into trouble more than once. Known to be supremely confident of his literary talent, he was also fearless. And he was ahead of his time when writing about women.

Following a tongawala’s untimely death from tuberculosis (“License”), his young widow takes over his horse and buggy to make a living, only to be met with hostility—and worse: “People were either trying to marry her or rape her or rob her. When she went outside, she was met with ugly stares.” She realizes, with a sinking heart, that only one profession is open to her.

In “Ram Khilavan,” which has autobiographical elements, a dhobi becomes teary when he realizes that the esteemed narrator, whose clothes he washes, is moving away. But the narrator, having escaped a mob’s fury, has no time for tears. The same could be said about the gimlet-eyed author of this splendid collection.