The Struggle for India's Soul: Nationalism and the Fate of Democracy 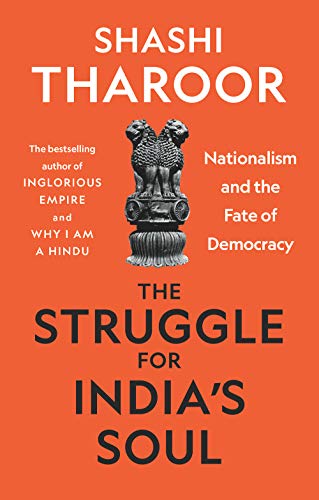 “In his sobering yet compelling book, Tharoor shows how in today’s India, where Hindu nationalists are firmly in power, a majoritarian mindset has supplanted the democratic mindset.”

Even those who follow political developments outside our borders don’t pay enough attention to the world’s most populous democracy. Understandable perhaps, considering how the situation in the United States, the world’s most powerful democracy, is causing so much anxiety as we look ahead to the next election. Are we in danger of becoming a “dinocracy” (democracy in name only), if not an autocracy?

Another term, used in The Struggle for India’s Soul, also captures that feeling. Ethno-religious nationalism is pushing India “towards a peculiar hybrid, a ‘dictatocracy’ which preserves the forms of democracy while brooking no dissent against its dictates.” In his sobering yet compelling book, Indian MP and author Shashi Tharoor shows how in today’s India, where Hindu nationalists are firmly in power, a majoritarian mindset has supplanted the democratic mindset.

Many factors—inequality, populism, demography, globalization, migration, disinformation, terrorism—have been mentioned to account for the rise of illiberal democracies, led by strongmen who inspire cultish devotion. In India, it began with the election of Prime Minister Narendra Modi and the Hindu nationalist BJP in 2014, but as Tharoor points out, the roots run deep.

The original sin, so to speak, was India’s partition in 1947. Religion—not region (North/South/Northeast) or ideology (Communism/Capitalism)—became the fault line in the year of independence, separating largely Hindu India from Islamic Pakistan. For Savarkar, a founding leader of Hindu nationalism, being Indian was indistinguishable from being Hindu, which he equated with race rather than just religion. And for Hindu nationalists, since their religion was also a political doctrine, what they wanted was a Hindu version of Pakistan, which essentially meant that non-Hindus in independent India would become second-class citizens.

It was an extraordinary demand, not least because India had given birth to four major religions and is home to millions who follow other religions. Its linguistic, ethnic, and cultural diversity is such that there are thousands of distinct dialects, and the Indian constitution alone lists 23 major languages. India today has the world’s third largest Muslim population.

Fortunately, those who led the freedom movement—Gandhi, Nehru, and Patel among others—and shaped the constitution—Ambedkar, chiefly—had other plans. Emerging as a democratic and secular republic, independent India promoted civic nationalism, which appeals to the mind because “it is a nationalism of constitutions and institutions you respect, rather than identities you are born into.”

But the votaries of ethnic (or ethno-religious) nationalism—a dangerous variant, which focuses on blood and soil—were patiently waiting. And they found their leader in the charismatic and demagogic Narendra Modi, whose government then set about Modi-fying India. Modi and the BJP, not surprisingly, are depressing reminders of Trump and today’s GOP.

Tharoor, who is highly articulate (he was a top UN diplomat for many years), provides an overview of nationalism in the first part, elaborating how “civic” means tolerant and “ethnic” means intolerant. He’s also good at explaining how the populist pressures alluded to earlier destabilized democracies like India’s. The top 1 percent of the world population, he notes, owned half the global wealth, and less than 3 percent of the wealth belonged to the bottom 70 percent.

Larger-than-life figures like Trump and Modi, by embracing identarian politics, remain popular regardless of how they perform in office. That’s the appeal of ethno-religious nationalism, which is tribal and highly emotional. In the West, nativists turned against racial minorities; in India, once Hindu nationalists came to power, the target was its largest religious minority: Muslims.

Epithets like “pseudo-secular” or “sickular” are frequently hurled at fellow citizens occupying India’s shrinking liberal space. Other favorites include “presstitudes,” aimed at a free press under increasing threat, and “libtards” (liberal bastards).

When the constitution was adopted in 1950, Indians could for the first time see themselves as individuals rather than members of a group. But Indian secularism, unlike in the West, doesn’t separate state and religion; instead, all religions are equally promoted. It became a bitter source of conflict.

Although religion, in the Indian context, was seen as too important to ignore, the state, by embracing it so boldly, sanctioned group identity, even allowing communities to follow their religious laws. That undermined civic nationalism, which calls for a uniform civil code. And so, a well-meant gesture to reassure religious minorities—seen as necessary, in light of how the country was partitioned—played into the hands of Hindu nationalists, who saw the state’s intervention as “minority appeasement” at the expense of the majority.

In one widely cited example, involving a woman named Shah Bano, the Congress Party, seeking electoral advantage, supported her community’s callous personal law over her rights as an individual in a constitutional republic. But what’s ironic, despite the claims of the Hindu right, is that Muslims lag well behind Hindus by every socio-economic measure. The BJP is the first governing party to not have a single Muslim in India’s Lok Sabha (Lower House).

Minorities, as Ambedkar sagely noted, “have loyally accepted the rule of the majority, which is basically a communal majority and not a political majority. It is for the majority to realise its duty not to discriminate against minorities.” He said that in 1948, but today, it means little to the Hindu nationalists who rule India.

Unlike agnostic Nehru, India’s first prime minister, Tharoor is a man of faith (one of his books is called Why I Am a Hindu). That makes his passionate defense of civic nationalism all the more persuasive—and necessary. Where he falls short is in his examination of the dynastic Congress Party he belongs to. After all, it ruled India for decades. Astonishingly, 75 years after independence, the party remains beholden to the Nehru-Gandhi (Indira) dynasty. This surely played a big role in the BJP’s rise to power, as did the era of unstable coalitions.

Tharoor is better when he talks about issues like Kashmir (which is more complicated than either side claims), Ayodhya (which was cleverly exploited by Hindu nationalists when a mosque-temple dispute gripped the nation), and the North-South divide (which exists and could get worse if the BJP pursues misguided policies involving language, and redistribution that would punish rather than reward lower fertility rates). The Congress Party infamously alienated Sikhs in the 1980s, and now it’s not just Muslims who are feeling the alienation.

This review doesn’t have enough space to write about the BJP’s assaults (on minority rights, institutions, and communal relations) in the “republic of fear,” where “internal enemies” are the targets of a vengeful state. Readers can turn to Tharoor for an overview of a “power-hungry kakistocracy supported by vigilante mobs.” Suffice it to say, the V-Dem Institute calls India an “electoral autocracy” and the Freedom House has downgraded it from “Free” to “Partly Free.”

Tharoor points out how, despite repeated missteps, Modi remains immensely popular, which no doubt accounts for his hubris. “Mistakes made in the first term, and the demonstrated lack of competence on a whole range of issues, from demonetization to the implementation of GST to the handling of the Covid-19 lockdown, to the Chinese attacks along the LAC, have obliged the BJP establishment to dig their heels in on their core principles, partly out of fear of failure and in reaction to backlashes they did not anticipate,” he writes.

It’s a mantra without a method, to use one of Tharoor’s telling phrases.

Again, Trump comes to mind, and though—unlike Modi—he didn’t win a second term, Trump did try to steal the 2020 election. It’s hardly a mystery why a staggering 74+ million voters backed Trump in his reelection bid. The power of ethnic nationalism, not to mention cults, cannot be underestimated.

Critics of the nation-state, even when the criticism is constructive, are often called anti-national. One way to counter that is to embrace patriotism, which Tharoor says is the sibling of civic nationalism, because it’s a “benign, tolerant, unthreatening love for one’s country with all its myriad strengths and weaknesses.”

Speaking as a believer, Tharoor says the Hindu view of acceptance of difference (“the Truth is one but the learned call it by many names”) is not at odds with India’s pluralism. He may not have easy solutions in the fight against ethno-religious nationalism, but his courageous and influential voice is much needed to prevent a second partition. As Tharoor notes, “a partition in the Indian soul would be as bad as a partition in the Indian soil.”