Run and Hide: A Novel 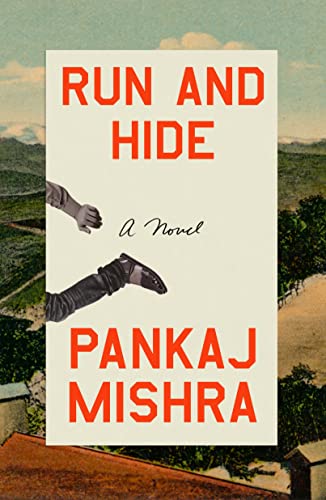 “Pankaj Mishra’s new novel is no less stimulating and insightful than anything else he has written, although there’s no tightly hewn plot here—and the drama that matters is internal.”

Formidably well-read, and known for his penetrating essays and reportage, Pankaj Mishra seems to have written for just about every serious periodical worth following in the US and Britain, where he lives when he’s not in his native India. In learned books such as Age of Anger and From the Ruins of Empire, he reversed the West-East gaze and wrote with bracing clarity about race, the impact of colonialism, despotism, and the collision between elites and those left behind.

But missing from his dense commentaries, however thought-provoking, was the engaging presence of Mishra, so familiar to readers of his earlier books, which include a travelogue, a spiritual memoir, and a novel. In Run and Hide, happily, he has come down the ladder of abstraction. Actually, it’s more accurate to say that he moves up and down the ladder adeptly, because Pankaj Mishra’s new novel is no less stimulating and insightful than anything else he has written, although there’s no tightly hewn plot here—and the drama that matters is internal.

Arun, who escapes his humble background when he gets into the famed Indian Institute of Technology (IIT), narrates the story in the form of a book-length letter to Alia, a youngish Muslim journalist from an affluent family. Her cosmopolitanism sets them apart, but their lives intersect when Aseem, Arun’s friend from their IIT days, makes an introduction in the remote Himalayan town where Arun is leading a reclusive life as a literary translator. Why Arun is writing this “letter” to Alia will become clear only in the novel’s last section.

Arun passes himself off as a high-born Hindu at IIT, even though his roommate, Virendra, is a Dalit from the lowest rung of the caste hierarchy. The “most superior” caste, to which these high-achieving IITians aspire, is “that of people who never have to worry about money.” Emerging from their constrained world, these wounded provincials find that “mediocrity is bolder and better connected than talent.” Fearing failure and suffering from “the peculiar panic and incoherence of self-made men,” their descent seems almost inevitable. There are echoes of Naipaul, whom Mishra references in the novel.

While talent and ambition can turbocharge the ascent of “mimic men” like Aseem and Virendra, there are also gravitational forces acting on them. Mishra, who is good at exploring such themes, has found inspiration in real examples like Rajat Gupta. This superstar IITian became a “god” to aspirants after making it big in America—only to crash in an insider trading scandal that also brought down a few other Indian Americans who had attained Gatsby-like success.

Aseem—he hosts talk fests and edits a magazine bankrolled by Virendra’s US-based hedge fund—bears some resemblance to Tarun Tejpal, a novelist and media maven who suffered a downfall. There’s a #MeToo movement scandal in the novel as well, not surprisingly. But readers don’t have to know anything about real-life barons, showmen, or charlatans to enjoy Mishra’s tale.

A gleeful social satirist, Mishra skewers the delusions of self-satisfied “hollow men” who turn a blind eye to the horrors of Modi’s India and the grotesque inequality unleased by neoliberalism, even as they caress the cliches of a New India. Quirkily, Hindi dialogue is included when the characters speak in that language. It seems pointless, since the English translation appears right next to it. Inserting occasional Hindi words would have been a better way to add flavor.

Arun, who chooses a different path from Aseem and Virendra, has a memorable reunion with them in New York, where “the lobby reverberated with the Hinglish and Mandarin of crazy rich Asians.” The novel’s most touching part is Arun’s relationship with his mother, who joins him in the small Himalayan town after her husband leaves her for another woman. But then comes disruption in the form of Alia, who’s working on a book about the rise and fall of the IITians.

It would reveal too much to say how Arun ends up in London, although it wouldn’t surprise readers to learn that he makes sharp observations about “members of the racially and ethnically diverse but otherwise acutely homogenous group” he finds himself in. Worldly and confident, they are “able to quickly discard inherited identity, or wear it, when the need so arose.”

Then comes some sad news about Virendra—and Arun, who is already beset by doubts, realizes that he’s beginning to resemble Aseem: “floating through the world, using up its opportunities of power and pleasure.” However, it’s a Dalai Lama-like Tibetan monk who triggers a true change when Arun goes to his talk in London. Arun makes a startling final decision, as the novel’s title hints, despite knowing that “there is no real escape from that farrago of cravings, delusions and regrets we call the self and the trail of devastation this nothing leaves behind.”