The Half Known Life: In Search of Paradise 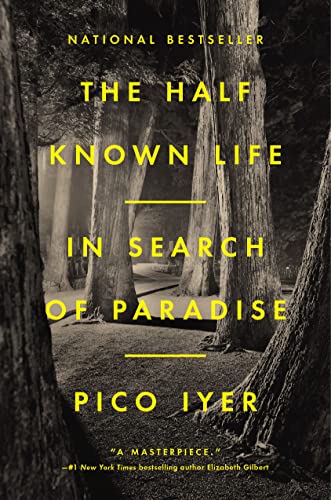 “Iyer’s narratives—whether he’s writing about modernity or monasteries, the Dalai Lama or domestic life—brim with insights . . ."

An anthology of Pico Iyer’s nonfiction could be titled Thinker Traveler Storyteller Seeker. In John le Carré’s famous novel, Tinker Tailor Soldier Spy, the title refers to the characters, but in Iyer’s case, the title describes an author who effortlessly wears all four hats no matter what he’s writing about.

For decades now, since he made his debut with the entertaining Video Night in Kathmandu, he has been bringing luminous reports from all over the planet. Iyer’s narratives—whether he’s writing about modernity or monasteries, the Dalai Lama or domestic life—brim with insights, showing how he’s not only a wide traveler but a deep reader and thinker. But while he has stuck to the genre that made him famous, his approach has evolved in the age of GPS, mass travel, and Instagram.

His recent books are more probing, meditative, aphoristic—and though Iyer continues to write about the people he meets, there’s also more autobiography. For instance, in Autumn Light, we learn a lot about Hiroko—his Japanese wife, whom he first introduced to readers in The Lady and the Monk—and her family.

In his latest book, he writes about the search for paradise, both as a personal quest and in a broader sense across centuries. His first trip takes him to Iran, which gave us the word—from “Paradaijah,” brought into Greek by Xenophon—and some of the most striking images associated with it. The same Farsi word, Iyer’s cultured guide points out, was used for both “paradise” and “garden.”

Later, in Alhambra, Iyer is reminded of his honeymoon at the Taj Mahal, where he and his wife had been enchanted by the landscaped gardens encircling Shah Jahan’s white marble dome. And in Kashmir’s Shalimar Gardens, where the same Mughal emperor had built a black marble pavilion, he sees this inscription in Persian: “If there be a Paradise on earth, it is this, it is this.”

But paradise is complicated, elusive. “Paradise, in short, is regained by finding the wonder within the wonder,” he writes. A chief pleasure of reading Iyer is the way he weaves his observations with those of Sufi poets, Buddhists, the folks he encounters, Hindu mystics, Christian thinkers, transcendentalists, modern writers, ancient philosophers. This pithy sentence seems to sum up a lifetime of reading and reflection: “The fact that nothing lasts is the reason why everything matters.”

Iyer’s travels take him to Broome, the most remote town in inner Australia, where he has an unsettling experience and is struck by the tenuousness of human settlements. And yet, in Jerusalem, he finds that “humans were so sure of their gods that each one drew, in rough bold strokes, his own image of paradise on top of somebody else’s . . .”  Such is the hubris of humankind.

A trip to Northern Ireland, while bringing back memories of its turbulent past, reminds Iyer of his schooldays during that period in England, where they’d studied Dante’s Paradise Lost (“Dream not of other worlds . . .”). His spartan boarding school, founded 530 years ago, emphasized self-restraint—and those habits have stayed with Iyer, allowing him to lead a monkish life at a monastery in California when he’s not traveling or spending time with his wife in their two-bedroom apartment.

All Iyer needed to know about impermanence came not when he was conversing with the Dalai Lama, whom he has known for over three decades, but when their family home in Santa Barbara burned down years ago, and they lost everything.

It’s not clear when Iyer made these journeys—some are recent, others not—but there isn’t a single reference to events like the pandemic or the Ukraine war, perhaps making the book slightly dated. In Sri Lanka, for example, while he draws attention to the very real impact of the civil war, there’s not a word about the economic meltdown that affected the entire nation. This doesn’t matter, ultimately, because the search for paradise is timeless.

Iyer’s strongest writing draws on Buddhism and, arguably, he’s most revealing when he travels in Asia. The Tibetan paradise Shambala became, in popular culture, Shangri-La. In Varanasi, which comes as a shock to the system, Iyer learns that the city “threw everything and its opposite together, and declared all of it holy.” What, then, is paradise? “The struggle of your life is your paradise,” according to the Zen teacher Eido-roshi.