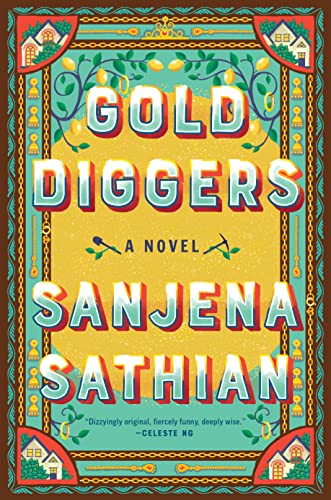 “Sathian, who writes with great assurance and verve, wields her pen like a magnifying lens to examine the foibles of immigrants who are high achievers but somewhat insular and insecure.”

In affluent suburban Atlanta, some Indian Americans must have nervously awaited the release of Sanjena Sathian’s debut novel, which will be adapted by Mindy Kaling for a television series. They’d have had reasons to be anxious, because Sathian, who writes with great assurance and verve, wields her pen like a magnifying lens to examine the foibles of immigrants who are high achievers but somewhat insular and insecure. The setting, Hammond Creek, which vaguely resembles Johns Creek, is a fictional suburb—and most likely, Sathian’s characters were also only partly inspired by various people.

Neil Narayan, through whose perspective the novel unfolds, comes of age in a place where “you could never properly avoid, shun, renounce, extract, or untangle yourself from any other desi” (South Asian). Sathian’s satirical take on Harvard-obsessed parents and strivers is cringingly funny, but poignant as well because “every emphasis on achieving a certain kind of future came from the anxiety of simply not knowing, none of us knowing, what life here could be.” The kids of these brown immigrants could never belong like their white peers.

Neil’s problem is that, unlike other desi kids, he doesn’t feel the weight of ambition (“the substance to settle the nerves of immigrant parents”), though he shares their anxiety. His object of desire is not the Ivy League but his comely neighbor, Anita Dayal, whom he sees as a kindred spirit. She seems distant, and it’s only when Neil stumbles upon a secret ritual that he realizes why Anita and her mother, Anjali, are so preoccupied. Anjali, using an alchemical recipe that she got from her mother, can make a gold-laced lemonade that makes the drinker a super-achiever. Neil is hooked, too, seeing this elixir as his ticket to success. Most important, his parents will be relieved.

The concoction, however, works only if the gold is from people with the right ambition. As a caterer with access to the households of prosperous desi suburbanites, Anjali knows those people, and she can acquire bits of gold without arousing suspicion. Neil joins his neighbors on their dangerous quest.

Sathian has noted how the novel’s title was inspired by a 2005 song called “Gold Digger” by Kanye West. Another trigger was a rash of robberies targeting Indian Americans in the Atlanta area, except the thieves in this story are desis. While they don’t need much gold, deception and greed have consequences, as Neil realizes to his horror when his attempt to extract the precious metal from one home leads to unexpected tragedy. The price of gold is, of course, always high.

Anjali and her daughter are not involved in this incident, at least not directly. But years later, reflecting on this period, Anita—a former Miss Teen India Georgia—tells a gathering at the pageant, “I would have literally killed to be seen as successful. My mother would have killed for me to be successful.”

Deception and greed marked the Bush era, which ended in a bust after the financial meltdown. Sathian doesn’t have anything to say about the politics of this period or, when the action shifts to California, the turbulence of 2016. Still, she brilliantly uses gold as an object of lust to examine the downside of the American Dream, whose glitter hasn’t dimmed for dreamers through the centuries.

A decade later, having moved to California, Neil is struggling to complete his doctorate in history. Although he has lost his appetite for gold, he’s still fascinated by its allure, as when he researches the story of Bombayan, the half-mythical prospector who came to California from India in the 19th century. The millennials in Neil’s milieu are diggers as well, though of a different kind. They’re the start-up people, chasing a new gold rush.

Sathian is at her best when she probes the psyche of second-generation desis like Neil and Anita. These children of immigrants are “conceptual orphans” who “had not grown up imbibing stories that implicitly conveyed answers to the basic questions of being: What did it feel like to fall in love in America, to take oneself for granted in America?”

Anita reenters Neil’s life, reigniting his longing for her—and when she says that her mother desperately needs their help, gold takes on the meaning of another four-letter word: hope. The twisty plot in the latter half is less compelling, and some may find that the magic realism detracts from the acute social realism of an author who could be a desi Jane Austen of suburbia.

But the tightly woven novel ends satisfyingly. There’s a moment when Anita realizes that she and Neil don’t have to follow the arduous route of their immigrant parents and grandparents. “We just have to figure out how to be at home right here,” she says. “That’s so much easier. That’s so lucky.”