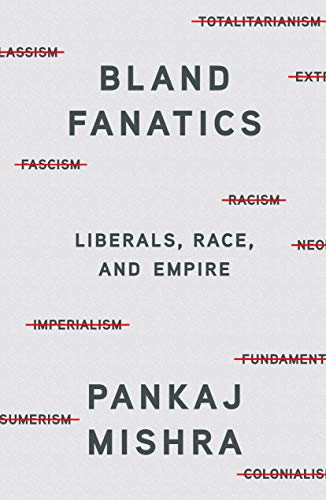 “Mishra’s astute and engaging book should . . . be seen as a warning.”

Mishra’s second collection of essays and book reviews, written over the past decade or so, first appeared in leading British and American publications. But Bland Fanatics remains timely, addressing an issue that consumes us: race. While that sounds simplistic, it’s true that for the most part, whether he’s talking about liberalism or capitalism, Britain or America, imperialism or colonialism, natives or foreigners, West or East, race is not far from the center of discussion.

Mishra touches on class, religion, and gender as well in these erudite pieces, which are probing but never too long. The collection will especially appeal to those who found his last two books (Age of Anger and From the Ruins of Empire) illuminating but a little dense at times, making them less accessible than his earlier books (An End to Suffering and Butter Chicken in Ludhiana) and personal essays such as “Edmund Wilson in Benares.” That’s not an issue in this volume, where the writing is supple and he can deliver a sucker punch with a deft phrase.

The title could have been Blond Fanatics just as easily, if jokily, because Mishra helps us understand how Donald Trump and Boris Johnson emerged as the leaders of Anglo-America. But who are these “bland fanatics” (a term coined by the American theologian Reinhold Neibuhr) that Mishra is referring to, and what have they done? They’re the neoliberals and neoimperialists who promoted the cult of unregulated markets, even in the face of growing inequality, and who sought to remake nations through feckless warmongering. Their shock-and-awe therapy had disastrous consequences, from Russia to Iraq and beyond.

The Angloglobalists, to use Niall Ferguson’s word, “would blunder through a world grown more complex and intractable, and help unravel large parts of Asia, Africa and Latin America before sowing political chaos in their own societies,” Mishra notes. Ferguson is, in fact, exhibit number one for Anglo-American delusions, with Mishra calling him a retro rather than revisionist historian for his touting of “six killer apps”—which the rest should download from the West, Ferguson claimed—and for urging American neocons to take on Britain’s old role and impose its values around the world. In light of recent events, how strange it sounds now.

“The centuries of civil war, imperial conquest, brutal exploitation and genocide were suppressed in accounts that showed how Westerners made the modern world, and became with their liberal democracies the superior people everyone else ought to catch up with,” Mishra points out.

Mishra’s education began not in the West but in Kashmir, where as a reporter he saw a majoritarian Indian government trying to impose its will on a resentful Muslim minority. And with the rise of Modi, “India, billed as the world’s largest democracy, descended into a form of Hindu supremacism and racist imperialism of the kind it liberated itself from in 1947.”

In an essay on the First World War, he notes how the contributions of millions of soldiers from Britain’s colonies were barely acknowledged. It was a troubling period, bearing some resemblance to today. An influenza pandemic took a heavy toll, and there was hypernationalism and pseudoscience. While eugenics became a justification for severe restrictions on immigration, Woodrow Wilson—initially hailed as a hero by colonized people—was more interested in preserving “White civilization and its domination of the planet,” in Wilson’s own words.

Whiteness became a religion during that turbulent period, Mishra says, and “it has now entered its last and most desperate phase with Trump in power.”

Although Mishra makes pointed remarks in reviews of books by Salman Rushdie, Katherine Boo, and Jordan Peterson, his political essays are more instructive, as when he takes on The Economist and Homo economicus.

Mishra has been commended for highlighting the contributions of forgotten intellectuals from the non-Western world. A few of them—like Lian Qichao—briefly reappear here. Rather than an invisible hand, as East Asians realized, what they needed was a helping hand from a strong state to transform their economies in an equitable manner. But what if the state is not benign (China under Xi Jinping comes to mind)? Mishra doesn’t address that—and though he’s right to say that in the wake of 9/11, the “war on terror” became an overreaction, religious fundamentalism remains a threat. To that, we can add white supremacism.

Mishra is firmly on the left, but it’s nevertheless startling to read (in an essay on Ta-Nehisi Coates) that Obama’s “actions in office soon made it clear that some version of bait and switch had occurred.” But a president has to move somewhat to the center in order to govern a highly polarized nation, especially when the opposition is so hostile. Otherwise you end up with a leader who cares only about his base. To grasp how Trump and Johnson rose to power, no issue is more important than immigration. The “deporter-in-chief” wasn’t Obama.

Mishra, though, is a sophisticated thinker and his heart is in the right place. As a child of India, he’s no doubt still haunted by its grotesque disparities—and knows that freedom without equality and dignity is meaningless. B. R. Ambedkar, the outcast who became a renowned legal scholar, made that point when he enshrined the principle of “one person, one vote” in India’s constitution. Mishra’s astute and engaging book should also be seen as a warning.