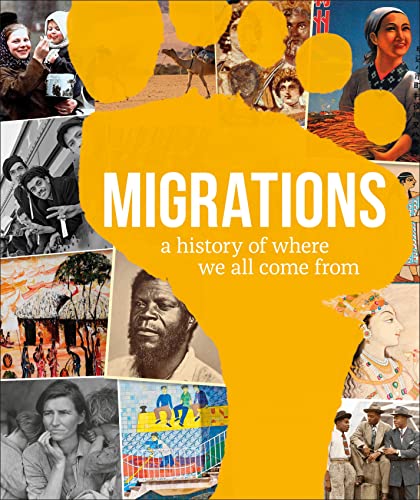 “Migrations, if placed on the coffee table, may supersede the phone during a commercial break. While not deep, the material is carefully vetted, making this attractive book a worthy addition in any living room.”

Considering how long it can take to put a book together—especially a factually reliable and visually striking book—it’s hardly surprising that Migrations has no mention of Russia’s brutal invasion of Ukraine. But there are glancing references that make the fierce, courageous Ukrainian resistance understandable. During the Cold War, the reader learns, Soviet “authorities had moved people around the country to promote development, increase control, and ‘Russify’ the ethnic minorities, pressing them to adopt the Russian language and culture.”

Stalin’s collectivist program—“pogrom” seems more accurate—targeted kulaks (wealthy peasants) and minorities, leading to mass deportations and deaths, which reached at least 20 million, though some historians say the death toll was much higher. One begins to understand why Ukraine, condescendingly called “Little Russia,” was never seen by the Russians as a separate country. This information is a good start, but it’s just a start. While the historic pictures and double spreads are nice, as is the table listing the former Soviet states, details are skimpy, and there’s no bibliography to guide those who want to find out more.

Despite the unimpeachable credentials of the contributors and consultants, this book is not for history buffs or students writing a serious research paper. So who is it for? Gift givers. Teenagers and quiz bowlers. And, of course, browsers.

These days, a smartphone is all one needs to bone up on any topic. However, for those seeking a few moments of illumination or diversion, here’s an aesthetically pleasing alternative. Migrations, if placed on the coffee table, may supersede the phone during a commercial break. While not deep, the material is carefully vetted, making this attractive book a worthy addition in any living room.

A third of Ukraine’s population—over 14 million—has already been displaced in this war. But migration is a huge topic, with its history stretching back to . . . well, prehistory, starting with the Out of Africa story of the first humans. Succinct chapters provide a bird’s eye-view of the earth’s peopling, ranging from the hunter-gatherers and settlers to the contemporary travelers who hop on planes to cross continents. Scattered through the book are interesting nuggets, such as the one about recent DNA analysis that shows genetic links between the Clovis people of East Asia and the Indigenous people of the Americas.

Apart from “The First Migrations,” there are sections titled “Ancient Empires,” “Transcontinental Contact,” “Colonization and Conquest,” “Mass Movement and Freedoms,” and “Decolonizations and Diasporas.”

Food and water scarcity, wars, ethnic cleansing, and natural calamities have long been causes for migration—but so is, especially in our modern era, the search for better economic opportunities and living standards. One of the biggest migrations happened between the mid-19th and mid-20th centuries when over 55 million Europeans made the trip across the Pacific Ocean to the United States.

Non-European migrants, for a long time, could go overseas in large numbers only as exploited workers—to help build railroads and canals, or to work as indentured laborers in the killing fields of the colonies. Between 1838 and 1917, after Britain’s appetite for raw materials and its export of cheap goods devasted the Indian heartland, more than 400,000 bonded workers left India for the Caribbean. About 17 percent died on the long journey by ship, but the misery didn’t end for those who survived.

This example of semi-voluntary or involuntary migration isn’t unusual; there are many other similar stories of traumatic displacement in our long history. In the second half of the 20th century, as nations became less restrictive and transportation improved, voluntary migration increased, especially from overcrowded developing countries in Asia and Africa.

In Australia, which began as penal colony and where the Indigenous people were subjugated and sidelined—a tragically recurring tale—non-white immigrants were kept out till the 1970s. But by 2001, the British accounted for only 25 percent of the migrants Down Under—and today, it’s India that sends the most people. Roughly 40 percent of Sydney’s population was born overseas. Older cities like London and New York are even more ethnically diverse.

As globalization comes under suspicion, and nations become more nationalistic, will there be a drop in migration? Unlikely. The greatest spike in migration (100 million) occurred in the first two decades of the 21st century. By 2020, around 272 million people were living outside their country of birth. Given factors like political and social turmoil, population growth, and climate change, migration will accelerate—not decelerate—in the coming years. Humans will never stop moving.