Each of Us Killers 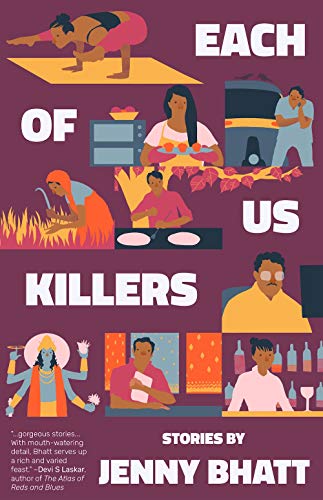 Is it better to read a story collection sequentially? Not necessarily, unless it’s a set of linked stories—and often, as in the case of this impressive and sometimes unsettling debut, reading it randomly could provide a nice change of pace from the way one normally reads a book. For instance, “The God of Wind,” which comes after the first 50 pages and is a page and a half, can be gulped down while waiting for a dish to warm up in the microwave. The story, involving a Mumbai autorickshaw driver’s grisly discovery, will land like a Molotov cocktail.

If meaty is more important than brevity, the reader can go directly to “Each of Us Killers,” or more logically, to the first story “Return to India”. Taken together, they show Bhatt’s wide range, both in theme and style, and her ability to inhabit characters who couldn’t be more different from each other. The title story, depicting caste oppression and violence in rural India, brings the collection to a harrowing conclusion, and the reader may feel, to use the Dalit narrator’s words, “as if a large mud hole has opened up beneath us all and we are sinking into it.” It was nominated for The Best American Short Stories 2018.

The other story, despite its title, is set in the U.S. and the narrators are mostly native-born colleagues of an Indian immigrant who has been shot in a bar. It was inspired by an incident in Olathe, Kansas, where a software engineer from India was killed by an inebriated racist. While the colleagues are sorrowful, horrified, and respectful, it doesn’t prevent comments such as: “You think you’ve known someone for a long time. Maybe he never really took to us.”

These American workers may reject “Trumpistan,” but it’s hard for them to forget that an immigrant is always an outsider. As the victim’s ex-wife notes, “We become too foreign for home and too foreign for here, never enough for both.”

Bhatt, an immigrant as well, embraced the literary life (she’s also a translator and does a podcast on South Asian authors) after getting burned out in Silicon Valley, where she’d worked as a management consultant. Her struggles as a writer who got a relatively late start prompted an essay on ageism in the publishing industry. A few of her stories—mostly flash fiction or those involving an unconvincing second-person point of view—are less successful, but overall, this collection of 15 stories introduces a writer of great promise.

Caste cruelty returns in “The Waiting,” which is narrated by the spirit of a distraught villager’s deceased wife. But gender is a fault line as well, making the spirit “wonder at a world that allows men to go about as if they own it and women to live as if they endure it.” In “Journey to a Stepwell,” for a woman caught between a job promotion and a marriage proposal, destiny is “a dagger thrown at you, which you must catch either by the blade or the handle. If you can figure out which end is which.”

Bhatt’s prose, sprinkled with similes and metaphors, can be evocative, and she can sum up a presence with a nifty sentence. Referring to a nouveau riche wife in a sari shop (“Mango Season”), Bhatt notes, “She wasn’t filmi pretty but had a cool stillness that made people stare.” Similar characters appear in “The Prize” and “Neeru’s New World,” in which we see the collision of urban and rural India through the eyes of a young live-in maid.

Perhaps not surprisingly, given Bhatt’s earlier career, work is a recurring feature of her fiction, revealing the subtle dynamics in play between those who have power and those who don’t—involving class, religion, gender, or caste.

“Life Spring,” another story set in teeming Mumbai, may remind the reader of Rohinton Mistry. Bhatt mentions him and three others—Katherine Mansfield, Jhumpa Lahiri, and Jennifer Egan—as writers who have inspired her. Having escaped an abusive marriage in the U.S., a divorcee tries to make it as a baker in her apartment building, where she contends with nosy neighbors and a young lower caste man, whose swagger comes as an unexpected, liberating spark.

The charismatic male instructor at a seaside yoga retreat for the well-off (“Pros and Cons”) has an aura that has a similar effect. The middle-aged female instructor, who thinks she’s a failure, finds renewal after an encounter that feels like a benediction from the younger, guru-like instructor. “When he lifts an arm in farewell, the ache that begins inside her is, she knows, the good kind.” Readers may feel the same way after they finish this powerful collection of stories.