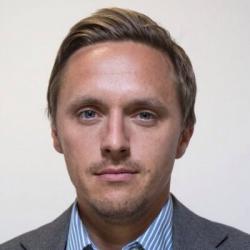 James Denselow is a writer on Middle East politics and security issues and a Director of the New Diplomacy Platform (NDP). He has worked extensively in the Middle East, including research for the foreign policy think tank Chatham House, writing and reporting for several media publications, and communications and advocacy work with international NGOs.

He is a contributing author to "An Iraq of Its Regions: Cornerstones of a Federal Democracy?" and "America and Iraq: Policy-Making, Intervention and Regional Politics Since 1958" and has advised the British Government on its policy toward the Arab Spring. He is a Research Associate at the Foreign Policy Centre (FPC) and a Fellow at the Centre for Syrian Studies (CSS).

Iraq of Its Regions: Cornerstones of a Federal Democracy?

Amazon Unbound: Jeff Bezos and the Invention of a Global Empire

Brad Stone is a Bloomberg Journalist who has previously written The Everything Store: Jeff Bezos and the Age of Amazon.

Professor Scott Galloway, who could perhaps be described as a celebrity businessman in a non-derogatory sense, has put together a book that essentially places provocative bets on what the post-pand

Unprepared: America in the Time of Coronavirus

This oral history of the story of COVID-19 in the USA from the start of the year until early June is a helpful reminder as to how much of this year like no other panned out.

Ten Lessons for a Post-Pandemic World

“Zakaria’s grasp of the big picture and his ability to channel such a wide narrative in a very readable format should be commended.”

Black Wave: The Saudi-Iran Wars on Religion and Culture that Destroyed the Middle East

The Dawn Prayer (Or How to Survive in a Secret Syrian Terrorist Prison): A Memoir

In late 2012 the freelance American photographer Matthew Schrier was heading out of Syria after a stint of work when his taxi was stopped.

A Disappearance in Damascus: Friendship and Survival in the Shadow of War

Such is the molten hot fury of Syria’s now almost seven-year conflict, that it seems hard to think back to how things were before.

“the work weeps melancholy and sadness as one would expect from someone who so clearly loves his country.”

Terror in France: The Rise of Jihad in the West (Princeton Studies in Muslim Politics)

The Way of the Strangers: Encounters with the Islamic State

Graeme Wood traces the origins of this work and his pursuit of greater understanding of the Islamic State to having almost been killed by a suicide bomber in Mosul in 2004.

How Everything Became War and the Military Became Everything: Tales from the Pentagon

Rosa Brooks is a law professor at Georgetown who spent two years working at a senior level in the Pentagon.

The Battle for Syria: International Rivalry in the New Middle East

The front cover of The Battle for Syria shows a hand composed of the flags of regional and international powers reaching across a bullet-ridden map of Syria.

Grunt: The Curious Science of Humans at War

Mary Roach is a fairly prolific author who brings humor and common sense to popular science.

The Girl Who Escaped ISIS: This Is My Story

Such is the level of horror coming out of the conflict in Syria and Iraq that people have become numb to the statistics.

Despite its rather bombastic title Peter Bergen has crafted an intelligent, timely, and important look into the post-9/11 challenge of Bin-Laden inspired terrorism in the United States.

The Way of the Gun: A Bloody Journey into the World of Firearms

“one line in the book . . . perhaps sums up the vast journey . . . 'a gun gives that ultimate edge of authority to someone who lacks it through intelligence alone.'”

Becoming a Citizen Activist: Stories, Strategies, and Advice for Changing Our World

Nick Licata, who served four terms on the Seattle City Council, has written a book that proclaims to help educate people on how to become citizen activists but is rather a more local and autobiogra

Charlie Savage, the Pulitzer Prize winning New York Times journalist, has put together a wide-ranging and important examination of the Obama presidency focusing on the legal-security chall

Riad Sattouf, the cartoonist and social commentator, has drawn a colorful and engaging first chapter of his three-part autobiography—now in English.