Battling the Big Lie: : How Fox, Facebook, and the MAGA Media Are Destroying America 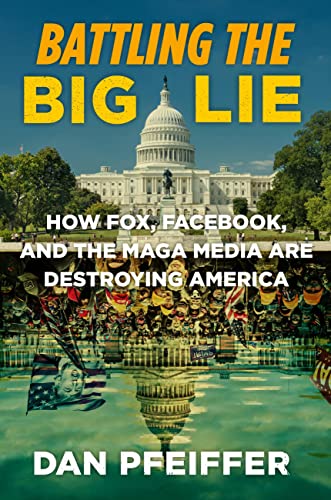 “without an ability for a nation to protect an objective truth that all political tribes can agree on, there is a substantial challenge in maintaining a healthy American democracy.”

Dan Pfeiffer has spent over 20 years in politics and as a former Director of Communications and Senior Adviser to President Obama and is unashamedly hugely partisan in his take on the current issues bedeviling the US political ecosystem. In Battling the Big Lie he sets out where he feels the current communications challenges are for the Democrats against the Republicans, who he describes as “just objectively wrong.”

Pfeiffer does not attempt to set up a sense of balance of objectivity in his account of how the Republicans and their allies have turned disinformation into a political strategy, and the book is a passionate call to arms for those who wanting to fight back. Interestingly there is an undercurrent to Pfeiffer’s view on his political opponents that is only given the throwaway line that “Republicans want the government to serve as a bulwark against the growing political and economic power of a diversifying America they view as an existential threat to their primary white, Christian base.”

This is not a book about Republican ideology, instead it sets out how the US media landscape is on the edge of what Pfeiffer describes as “a precipice” with the rise of the internet and corresponding decline of mandate and power of the traditional media. Into this environment come those who seek to nurture an alternative media ecosystem where regulation is essentially absent. He sees an information war where one sides ability to propagate conspiracy within an internet “supercharged echo chamber” means that we face the prospect of the conclusion of a “decades-long conservative war against the very idea of objective truth.”

President Trump’s time in office simply accelerated this trend, and his attempt to immediately challenge the size of his inauguration crowd, against the clear objective evidence, was about setting the bar for the “Big Lie” and disputing the 2020 election to come. Within the Trump term the rise of “alternative facts,” attacks on the messenger and the use of straw dogs (Pfeiffer cites the debate around critical race theory as one) fed a support base mobilized by anxiety and fear.

The traditional media, seen by Democrats has having the clearest mandate to protect notions of an objective truth, is seeing its financial model decimated by the rise of instantly available free news online. Division has replaced news, and balance has replaced accuracy, writes the author. Within the vacuum of declining traditional sources of media comes a new model funded by rich people who benefit from Republican polices, with Pfeiffer using the example of the Koch brothers’ donation of $8 million to pro-Republican media outlets being part of an equation that saw them secure a $1.4 billion tax break from Trump Administration.

Facebook, a platform that can reach some six billion people, is called out by Pfeiffer as a “pro Trump platform” that depends on “spreading disinformation” and that can be relied on to be “profiting off the destruction of democracy.”

So what can be done? The solution is far harder to see than the problem, but Pfeiffer has an array of suggestions from the simple and easy (don’t feed the trolls online; it gives them attention that empowers them) to the macro around the need to “invest in a progressive propaganda operation that can go toe-to-toe with the Right.”

Pfeiffer’s analysis is that “Democrats spend 99 percent of their time worrying about what they should say and only 1 percent figuring out how to get people to hear what they are saying.” Embracing propaganda, but not based on disinformation and lies, is the crux of his argument as to what is missing. A “progressive echo chamber” supported by an army of keyboard warriors would mean a more aggressive and direct form of communication with Democrat voters, he argues. Evidence around how this could work is limited but his own involvement with “Crooked Media,” a network that “showcases stories, voices, and opportunities for activism,” is cited as offering a potential playbook for this effort.

Battling the Big Lie is an impassioned call to arms by a partisan political operator who makes no secret of where he is coming from. While his recommendations require significant unpacking and development, he is fundamentally right that without an ability for a nation to protect an objective truth that all political tribes can agree on, there is a substantial challenge in maintaining a healthy American democracy.