The Girl Who Escaped ISIS: This Is My Story 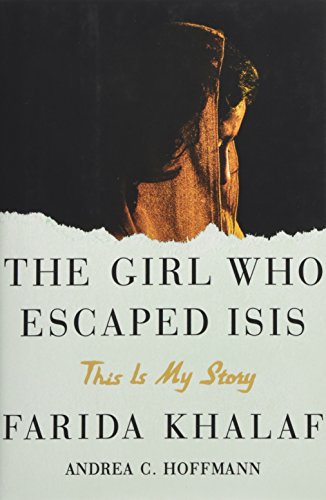 Such is the level of horror coming out of the conflict in Syria and Iraq that people have become numb to the statistics. Hundreds of thousands are dead, millions have been forced from their homes, and countless lives have been torn apart as states collapse in on themselves.

Into this bloody mix emerged ISIS, the bête noire of modern terrorism. Ruthless, rich, media savvy, and a threat not just to those in Syria and Iraq but seemingly everyone else who contests their vision of a Caliphate. The fight against ISIS has brought in four of the permanent five members of the United Nations Security Council and has become one of the central narratives in international relations today.

Into this story of countries at war from within and without comes the tale of Farida Khalaf, as translated and edited by the journalist Andrea Hoffmann. Farida’s story cuts through the statistics and the geopolitics to tell of a single life changed forever by a war that arrived in their village of Kocho, on a plain to the south of Mount Sinjar in northern Iraq.

Farida was a 19-year-old Yazidi woman who dreamed of becoming a math teacher. She tells Hoffman of a rural idyll of sorts, growing up with a loving family and the traditions of the Yazidi faith.

After a brief introduction into the life that was, one that doesn’t go into much detail as to the intricacies of her faith beyond the misunderstandings that sees some label Yazidis as “devil worshipers,” the inevitable arrival of gunmen fighting under ISIS black flag sees her family separated and Farida driven to Raqqa to be sold on the slave markets.

Farida’s narration is not dominated simple by fear but also a repulsion of her ISIS captors described as “men who thought they were the master race.” She rejected what could have been an easier path of forced conversion and hid that she spoke Arabic.

Meanwhile she looked for every opportunity to escape before the inevitable sexual assault. At one point she gets out but is stopped by ISIS guards who are then approached by the “owner” who reassures them that “these are my Yazidis . . . I've got the ownership papers.”

Such was the primary concern Farida had toward preserving her honor that she tried to kill herself on several occasions as a means of taking back control over her own destiny. At one point she celebrates seeing her friend beaten up as it proved she wasn’t raped, yet there is no way to avoid this happening to Farida. Tragically we read about her rape by her ISIS owner.” The following day is described graphically as Farida wakes up to “the smell of blood and sperm” but still keeps her spirit alive and determined to escape.

Farida provides a unique insight into life under ISIS. The ISIS fighters describe the group of “lovely young Yazidis” as they arrive to purchase them at the markets. She is sold multiple times, once for $50. She fights one “owner” while he insists on praying before raping her.

It is a story of loss of innocence but also discovery of an amazing inner strength that drives Farida to survive the nightmare and to bear witness to what happened. She continually looks to escape; at one point she is put in charge of operations to get out of their prison and given the nickname “Barack Obama.” Finally she manages to lead an escape party dressed in black abayas traveling at night, the perfect disguise.

Hoffmann found Farida in a refugee camp back in Iraq. She describes her as a girl “who defeated ISIS” but the final chapters are a reminder as to the impossibility of easily putting your life back together after living through such events. Farida eloquently describes life in a refugee camp—“when so many traumatised people live in such close proximity, there's no spark of optimism.”

So what of the future? Farida’s selection and resettlement with her family in Germany is a important reminder of the generosity of the German scheme and the importance of Europe taking responsibility for vulnerable refugees. As to the future of Iraq and the relations between its people of different religions and ethnicity, Farida’s mother warns that she will not to back to where she once lived as “we’ll never make peace with the Muslims.”