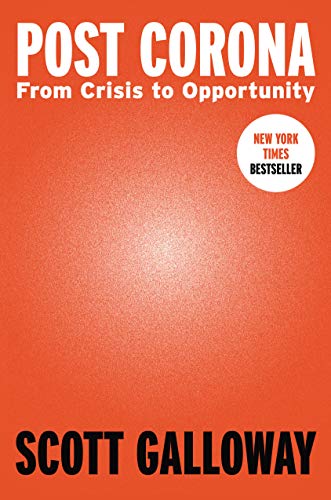 Professor Scott Galloway, who could perhaps be described as a celebrity businessman in a non-derogatory sense, has put together a book that essentially places provocative bets on what the post-pandemic world will look like and who are the biggest winners and losers.

Galloway must have known when finishing the book in August of 2020 that it would be rapidly overtaken by events (he writes that ‘life has largely returned to normal in most of Europe’) but by looking at wider pre-existing themes the book maintains its relevance and could almost have been penned regardless of Covid-19 dominating the lives of much of the planet of the course of the last 12-months.

Much of the work looks at how the pandemic will shape future business environment and argues unsurprisingly that technology will have huge disruptive effects, both positive and negative around the future of work. Telemedicine, an explosion in home working, a collapse of business class travel, universities with no students, and reverberations across the global supply chain are all tackled with helpful charts and graphs thrown in.

The analysis is not academic but rather lite touch, provocative and written with humor and good turns of phrase—such as describing charismatic big tech founders as speaking “yogababble.” There is also an underpinning set of arguments about fairness, press notes quote GQ describing the author as “Gordon Gekko with a social conscience.” Galloway has worked his way up from humble beginnings and the book sounds the alarm around the ‘fairness’ aspects of all the various Covid policies. Homeworking, for instance sees 60% of jobs that pay over $100,000 able to do it, but only 10% of jobs that pay under $40,000.

Galloway is critical of those big tech firms who have turned consumer data into assets and sets out the opportunities for companies to become “the iOS of social media.” The crisis has allowed an already unregulated big tech sector to become dominant. Amazon, for example, could hardly have dreamed of a better scenario than people being forced to stay in their homes. “Laws,” Galloway writes, “written by the light of coal power don’t work against digitized monopolies.” He celebrates Twitter looking to embrace a subscription model and argues that while big tech may be the “winners” from the crisis, they need to channel their energy and profits into a more ethical capitalism for this to be sustained.

Galloway teaches at NYU’s Stern School of Business, and his most interesting chapter is around how Covid will disrupt higher education. He argues that the industry has seen a 1400% increase in cost over 40 years with no real logic beyond protecting an elite status. The move to online education and the crisis of attendance particularly around international students means universities will have to “go bust or go big.” Technology has created scale, and scale increases both access and revenue but only if universities embrace the opportunity.

The book is entirely US centric—despite these trends having global significance—and certain phrases are overused (so much is described as “ripe for disruption”). Looking at the capacity and role of government and society Galloway bemoans how the “muscles of collective sacrifice had atrophied so as to become feeble”—a topic worthy of far more insight. He describes a pre-Covid trend toward government being “neutered,” allowing the post-lockdown bailouts to primarily benefit the rich, yet the roadmap toward the answers to these systemic issues is somewhat vague.