The Battle for Syria: International Rivalry in the New Middle East 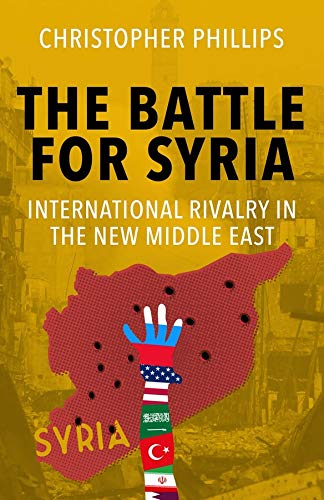 The front cover of The Battle for Syria shows a hand composed of the flags of regional and international powers reaching across a bullet-ridden map of Syria. This is the essence of Philips’ argument and his examination of a conflict described as the “greatest human disaster of the twenty-first century.” It is a story of Syria’s descent into chaos with a focus on the role of other countries and particularly the U.S.

Philips, a senior lecturer at Queen Mary University of London, argues in a lucid and readable manner with a good balance of facts and anecdotes, that while domestic triggers and the wider impact of the Arab Spring may have caused the crisis, it was maintained by “external powers being unwilling to prioritise ending the conflict over their own wider geopolitical agendas.”

Assad’s regime was more durable than many thought after the initial uprising, and he has been able to survive through the intervention of others, both in favor and against him, as well as “a combination of brutality, ethnic solidarity, economic benefit and ideology.” Crucially those who were against him were not as effective as his allies. As Philips explains “Assad’s allies were willing to give more to ensure the regime’s survival than those states that wished to hasten its fall.”

Syria’s vulnerability to the winds of the Arab Spring was not just its contagion effects but also circumstances unique to Syria. The transition from Hafez to Bashar and the emergence of a new approach to Syria’s economy worked well for many but left large numbers behind. The rural population of Syria, once the bastion of Ba’ath support, was hit by a removal of subsidies and a devastating drought. This saw the numbers working in agriculture drop “from 30% in 2001 to 13.2% in 2010.”

Following the start of the uprising Bashar attempted a combination of “carrot” reforms which failed to gain traction while pursuing a “whack-a-mole” policy of cracking down on protestors in a steady escalation in the tools of repression. The escalation continued as there appeared to be no effective sanction of the regime’s behavior from abroad.

The ambivalence of the West is largely explained by Philips as due to an absence of American leadership in the region. The decline of Washington’s influence is traced back to the 2003 invasion of Iraq and its bloody legacy that has eroded American willingness to intervene once more. Crucially this transition into a “post-American Middle East” was not understood by large numbers of Syrians who still “perceived American power to be the future of the region.”

The American public was ambivalent about greater investment of U.S. blood and treasure in the region and the government had a poor record of understanding the country. In 2009 the State Department’s Syria desk “consisted of one person only.” With the arrival of Obama in the White House you had a pragmatist President who defined part of his appeal on avoiding the messy interventions of his predecessor.

What Philips skilfully argues is that the issue was not that Obama did not understand power, or that real power is not having to use it, but rather than in his rhetoric around red lines and Assad’s behavior he was unable “to dispel the myth that he might intervene” which “served as a conflict escalator as rebels and regional allies pursued strategies that rested on eventual US military support.”

While Washington appeared to prevaricate, the Russians saw the opportunity to move into the region and to further their own interests. Such self-interest meant that notions of transition away from Assad were never seriously held and Western “belief that Russia could be persuaded” was a miscalculation.

Philips touches on the role of the Russian Orthodox Church in supporting Moscow’s intervention which is a subject worthy of further exploration. What is clear is that when Russia deployed its military outside the former Soviet Union for the first time since the end of the cold war, it helped shore up a regime that was in some distress. The Syrian military had gone from having 325,000 men in 2011 to 178,000 in 2013. The conflict drained significant resource away from Damascus and forced them to look for regional allies to keep them in business.

The Russians were happy to take advantage of a post-U.S. Middle East to support an ally, broaden their strategic sphere and make some money. As Philips explains the Syria conflict was affordable to Moscow and allowed them to demonstrate the effectiveness of Russian arms in action—“the campaign would boost Russian arms sales by $6-7 billion.” Meanwhile with the Iranians pumping in men and “up to $6 billion a year,” Assad had loyal support which allowed him to adopt a dismissive attitude to various peace attempts.

Indeed the ultimate chutzpah must be the chemical weapons attack in the Ghouta area of Damascus that killed some 1,400 people—three days after the arrival of a UN mission charged with looking into chemical weapons attacks. What is more the regime looked to pollute and divide its opposition. Philips outlines how “the regime wanted to see radicals defeat moderates within the rebel forces,” with prisoner amnesties in particular “cynically used to release radical Islamists.”

The inability of the opposition to be either a united or effective grouping is explained through looking into the failings of their patrons. Philips focuses particularly on Turkey which despite its “neo-Ottoman” ambitions for the region only had six out of the 135 Turkish diplomats working in the Arab world who spoke Arabic in 2011.

The book explains that “the more external actors involved, the longer the civil war is likely to last.” The large cast of countries playing their own politics inside Syria has indeed poured fuel on a complex conflict that operates at several geopolitical layers. Philips’ conclusion, that it is a war that “everyone lost,” does not give much hope for the future and sets the scene for an examination of what sovereignty in the region means.