Unprepared: America in the Time of Coronavirus 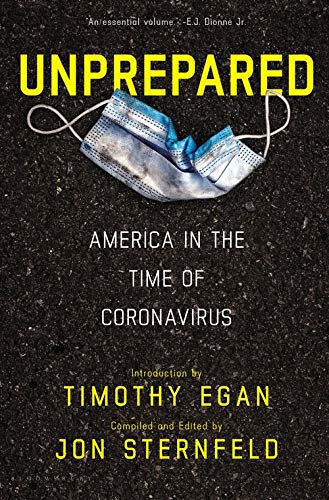 This oral history of the story of COVID-19 in the USA from the start of the year until early June is a helpful reminder as to how much of this year like no other panned out. In the era of overwhelming news and information its helpful to have a book bring together the story so far, from the moment the virus was discovered to the point in the middle of the year where a sixth of Americans had lost their jobs and over 100,000 had been killed.

As Sternfeld describes it “the American condition, laid bare by a virus.” The critique is both that it tells only part of a story that continues to worsen and metastasise to this very day, and the any oral history is shaped by the cherry-picked choices of the editor. In this case in a partisan election year comes a withering critique of President Trump that doesn’t choose to examine his political opponents with the same vigour. Indeed, for much of the book’s chronological telling it contrasts the anger rhetoric of the Republican President against the more unifying efforts of Democratic Governor Cuomo.

What the book does that is absence from so much of the day to day coverage is highlight the perfect storm of this particular virus entering a country where 28 million people have no health insurance during the peak months of one of the most partisan elections in US history. It is also sobering to read about such recent periods of history when the numbers were so low, a reminder if needed of how exponential the crisis has been. As Sternfeld writes, it truly is “America’s reckoning.”

Whilst this book is a US story of the virus, it starts in January with Chinese President Xi describing it as the “devil” and declaring a “People’s War” against it. By contrast President Trump starts a refrain that becomes tragically familiar; reassuring Americans that it would go away and that “hopefully, everything’s going to be great.” Yet he banned travel from China at the end of the month and the subsequent revelations in the Bob Woodward book Rage showed that he knew how serious the virus was.

In February the book reveals how closing borders came too late when faced with a virus that spread too quickly and too silently for the US public health surveillance systems. Trump either didn’t realize this or was already too focused on electoral priorities. Time and time again his words reveal someone who saw hope as a strategy. He appears more of an optimistic commentator than an active participant in events—especially considering his own advisors such as Dr Fauci were warning of 2% fatality rate. February saw the first US death from COVID, described insensitively by the president as someone already at “medically high risk.” Yet the focus on the White House avoids a full interrogation of why the Centers for Disease Control and Prevention (CDC) testing systems failed so badly.

By March the debate about masks began, supplies of personal protective equipment (PPE) began to run out and countries around the world started adopting lockdowns. Dr Fauci at the time would warn that risk from the virus is “low” while Trump claimed incorrectly that “anybody that wants a test can get a test.” Despite arguing that it was similar to the flu and that a cure can’t be worse than the problem itself, Trump declared a national emergency. The economy would start to crash as the US took the global lead in COVID-19 cases and the death toll would move from two to 3,768 by the end of the month.

In April as the deaths accelerated, underlying trends were revealed showing how the virus was disproportionately affecting black and minority groups. The virus was holding a mirror to US society Senator Sheila Jackson Lee referred to it as the “Black virus” yet President Trump continued to downplay danger while delegating responsibility to the States. Famously he suggested injecting disinfectant whilst also ordering the defunding of the WHO. By the end of the month 22 million jobs had been lost and the death toll topped those Americans killed in the Vietnam war at 62,557.

On one day in May almost 3,000 Americans died within 24 hours. Yet the political narrative was of “opening” despite the real story was the same grim one of death and division. Trump described the US population as “warriors” and said that having lots of cases was a “badge of honor” to the success of testing. Meanwhile he was started having his tweets blocked as the political environment became even more hysterical following the killing of George Floyd. By the end of the month over 108,000 Americans were dead, less than half the current (November) tally of 230,000 dead.

The book ends with Trump trying to quell both the virus and civil unrest. Bizarrely, so much has happened since then that it feels a lifetime ago and surely this book deserves a second edition to take it to the end of 2020. However, I hope that a new edition can expand its themes better beyond the US borders and provide more reflections from across the political divide as to why the US was so particularly unprepared for COVID-19.