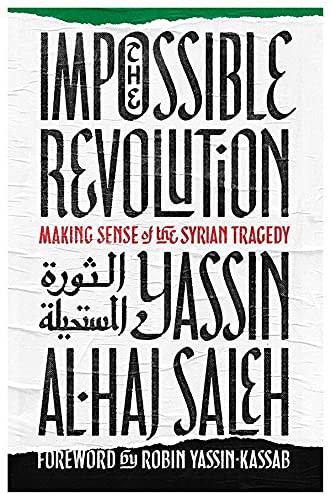 “the work weeps melancholy and sadness as one would expect from someone who so clearly loves his country.”

Yassin al-Haj Saleh is a Syrian intellectual who in a series of ten essays, his first book in English, sets out the background to the current tragedy being witnessed by his country. Saleh’s story is an emotional account informed by his lived experience including time spent in prison and seeing his wife, relatives, and friends ‘disappear’ into the maelstrom of violence.

He is a passionate defender of the original ideals of the Syrian “revolution,” which he describes as “not an armed insurgency: it is a peaceful revolution with an armed component.” Considering that each essay was written at different stages of the conflict there is a degree of repetition but this serves to reinforce what is a powerful critique of the Syrian regime, the disorganized opposition and the rise of terrorist jihadist groups that came to dominate the conflict.

Saleh warns that the devastation of the war has led to Syria becoming “a shapeless country” with real fears as to its future viability.

ISIS and fellow jihadist groups are described as “nihilists” but perhaps more interestingly also as “basically independent agencies run by fanatics.” Sadly, Saleh doesn’t unpack what this really means and the reader is left with the whiff of conspiracy theory. Saleh does make an important argument around how the West’s definitions of terrorism have “discredited it as a serious topic of discussion” as “every armed resistance is terrorism.” This “Western distortion” has created an absence of understanding of grievance, almost as if ISIS emerged from the ground without history or logic.

The author predicted the rise and rise of ISIS back in 2012 and explains that their simplistic message and offer of discipline appeals at a time of great chaos. He makes the cogent point that whilst the world focuses on the foreign fighters of ISIS, in fact “Jihadists are foreign everywhere, their homeland is their doctrine.”

The supposedly “moderate” opposition that led the early revolution became “an extremely desperate struggle against a brutal power.” Saleh argues that the nature of the Regime and its suffocation of political oxygen before 2011 meant that the opposition took too long to offer a political framework and were intellectually inadequate. They lacked a vision that could unite enough Syrians and defaulted to a desperate scream of “where is the world?” The opposition are scattered, voiceless and unable to bridge Syria’s present to a better future.

This leaves the regime itself, which endures the most of Saleh’s ire.

He uses the word fascist a lot but adds to this accusations of insanity and psychopathy. The Regime’s fundamentals come from roots of “absolute Arabism,” with Kurds seen but unheard, that relies on a constant conspiracy theory to ensure legitimacy backed by extreme violence. Yet he is guilty of slipping into conspiracies of his own with unsubstantiated references to “foreign sponsors” and “foreign spies.”

Saleh accuses the Assad regime of Sultanic-style dynastic rule. They are statist, conservative and anti-democratic with a deep-seated fear of the “tyranny of the majority” that is used to manipulate classist-sectarian tendencies to maintain control. Characteristic of this rule are the intelligence agencies and the shadowy “Shabiha.” sectarian thugs who are “typically lowborn and uneducated.”

The regime rules by force and ideological hegemony to ensure that the ‘poor and disadvantaged can be deployed as fanatical defenders of a wealthy political elites via manipulation of sectarianism. He describes them as a neoliberal occupying power that is divided into an outer state—with political positions that would seem to mirror other countries—and an inner state made up of intelligence agencies and the Assad family that wield the real power without accountability.

Syrian society is thus defined by paranoia and the absence of trust between citizens. His vision of the future—a Syria for Syrians with guarantees of freedom and justice for all—is a noble one but is not accompanied by any roadmap as to how that will happen.

Saleh’s work therefore reads more like a lament over the lost opportunities from the early days of the revolution rather than a blueprint for a way forward. The author deserves much praise for maintaining his intellectual pose while suffering personal tragedy, and the work weeps melancholy and sadness as one would expect from someone who so clearly loves his country.