Black Wave: The Saudi-Iran Wars on Religion and Culture that Destroyed the Middle East 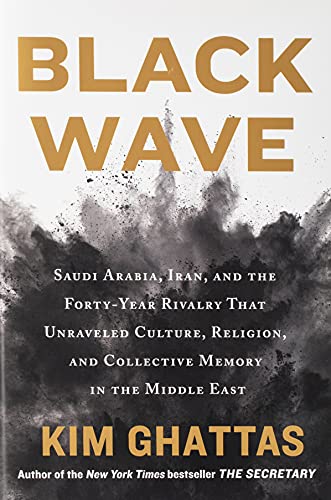 Kim Ghattas, a former BBC correspondent turned scholar, has followed up from her bestselling account of following Hilary Clinton’s tenure of Secretary of State by writing an epic history of the modern Middle East and neighboring parts of South Asia.

It’s an account that reaches all the way back to the formation of the region’s major religions, but its key narrative is a more focused account of how “two Islamic revolutions” in Saudi Arabia and Iran would trigger a rivalry that would metastasize and dominate the lives of millions. The key year is 1979 in which Ghattas describes how the Islamic Revolution in Iran and the siege of the Grand Mosque of Mecca unleashed forces that equated to a “black wave” that swept across the region with particular nefarious effects in Afghanistan, Egypt, Pakistan, Iraq, Lebanon, and Syria.

A geopolitical rivalry between Iran and Saudi Arabia, two countries who relied on religious legitimacy for much of their power, would create a battle for the political soul of Islam. Ghattas argues that the two countries are still hostage to the events of 1979 when “everything changed.” Their competition for the hearts and minds of the world’s Muslims would unleash “forces of darkness” and snuff out the progressive intellectualism that existed before it. The key year of 1979 “began a process that transformed societies and altered cultural and religious references,” and Kim Ghattas crafts a layered history engagingly told via an almost fictional style filled with powerful anecdotes. Indeed, at points Black Wave reads like a thriller as overlapping plots come together at pivotal political moments.

A religious competition would sometimes manifest in strategic mosque construction, sometimes through active religious conversions but more often than not it would translate into a battle for influence over the geopolitics of both countries’ neighborhoods. The Palestinian cause was important to both and Iran was quick to create their own version of “Jerusalem Day” and add chants of “death to Israel” to the more traditional anti-American chants at tightly organized protests.

The rivalry’s long-term aspect has meant that the roots of sectarianism have reached deep especially in Iraq and Pakistan. The civil wars or political strife that would live in the shadow of the hatred manifest by massive investment in religious seminaries and other institutions of education would mean that Sunni and Shias were “killing each other for the first time in centuries.”

Ghattas is damning of those romanticizing these revolutions—“the allure of anti-imperialism can be blinding to those who don’t have to make any of the tough choices required of life under a repressive rule.” The two main country protagonists become characters in and of themselves.

Iran’s revolution is forged more fully in the brutal eight-year-long war with Iraq. In Lebanon their approach is slow and methodical. Hezbollah’s presence and prerogative evolves over time. The “hope” that Ghattas refers to in Iran’s case is the disconnect between the country’s tools of oppression and its failure to become a “fully totalitarian state.”

Saudi Arabia is more defined by the incredible influence its money can wield on Islamic culture in and beyond its borders. In Egypt 6% of books published in 1985 were religious, Saudi influence helped that number reach 85% by 1995. In Afghanistan Saudi charities built “hundreds of madrassas” along the border with Pakistan. The “Saudization” of countries like Pakistan and Egypt would have intended and unintended effects. Ghattas describes ISIS as a “Saudi progeny,” the “by-product of decades of Saudi-driven proselytizing and funding of a specific school of thought that crushed all others.”

The “black wave” would create competition both on the ground and in the domain of Islamic jurisprudence and leadership. Khomeini’s edict to kill Salman Rushdie for writing The Satanic Verses, for example, was met by a more legal response from the Saudis. More overt and direct competition included the use of four thousand pounds of explosives to assassinate Rafiq Hariri, an act that Ghattas boldly cities as meaning that “Iran had declared war on Saudi Arabia.”

Ghattas has a distinct and accessible style and the book is more than a simple history. The author’s identity and the sense of a personal argument from the Lebanese-born author is in the DNA of the text that concludes by arguing for choosing to hope over despair.