The Dawn Prayer (Or How to Survive in a Secret Syrian Terrorist Prison): A Memoir 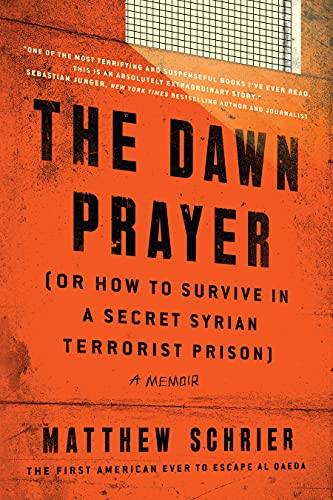 In late 2012 the freelance American photographer Matthew Schrier was heading out of Syria after a stint of work when his taxi was stopped. Suddenly he found himself bundled out by armed men into seven months of captivity. This rollicking and gripping account of his time in detention is an insight into what happens to humans when they are deprived of their freedom.

Schrier is a cocksure New Yorker whose childhood “reign of terror” saw him secure 60 days in a county jail for robbing houses. Although Syria was by no means at “peak chaos” in 2012, it is still a strange place to find Schrier, who had no Arabic language skills, institutional support, or any real knowledge of the country.

Although he was transferred between locations in and around Aleppo it was apparent that his primary captors were the Al-Qaeda linked group the Nusra Front. Rather than being executed on camera in an orange jumpsuit, something that ISIS would later become a household name for, Schrier is drained of his bank account by his captors who see him as an asset with an undefined value.

As a Jewish American, Schrier is more than aware of his need to think on his feet in order to survive. He does this through a reliance on confidence, humor, and empathy. He nicknames his guards and seeks human connections. Humor is not just a copping mechanism but a way of bridging cultures and protecting himself against the random acts of torture and beatings that come his way.

It is important to note that Schrier experiences nothing like the level of torture and deprivation of so many Syrians that have disappeared into the prisons of the Regime or other armed groups. His ability to secure allies allows him to accrue blankets and occasionally secure more preferential treatment than others around him. Schrier also avoids any sustained period of isolation, instead being held with regime soldiers or paramilitaries and most importantly with another American by the name of Theo.

The relationship between these two Americans defines much of the book. They are substantially different characters; while Schrier is an extrovert, Theo is introverted and spends much of his time in captivity hiding under his blankets. Theirs is an awkward buddy story in many respects. While Schrier looks to find any opportunity to work out, Theo spends time naming his bedbugs.

Schrier spends a lot of time explaining the practicalities of food and toilet visits—all part of his effort to maintain his humanity in the face of such oppressive conditions. He describes his world as “Lord of the Flies, only instead of being armed with spears and bows, they had AK-47s and RPGs.” To kill time Schrier would look to recite entire movies and play homemade chess or various forms of volleyball.

Occasional visits from a variety of different jailers put a pressure on Schrier that eventually sees him “admit” to being CIA and convert to Islam as a means of improving the chances of his survival. His analysis of those around him is interesting at a human level but lacks any real insight into events in Syria itself. At one point he describes one of his captives by writing that “he may have been a jihadi, but he was a good man, and a good Muslim.” Later he can only describe the violent absurdity he finds himself in as “only in fucking Syria.”

Schrier admits that the experience has made him “stronger” and the story of his escape is particularly thrilling. It is a shame that longer is not spent on telling the story of his homecoming. Apparently, the FBI suspected he may have been recruiting by extremist groups so there was no flag waving homecoming parade. Schrier has now found himself giving motivational talks to the U.S. army, and this book is surely going to sell lots of copies at signings.