Ten Lessons for a Post-Pandemic World 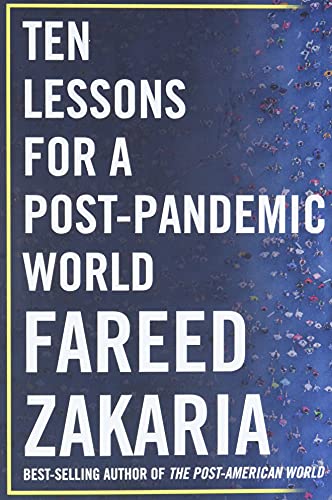 “Zakaria’s grasp of the big picture and his ability to channel such a wide narrative in a very readable format should be commended.”

The veteran CNN host and author Fareed Zakaria is famous for his weekly take on the prominent issues of the day. In an early attempt at what will surely be a wave of books on the Corona virus age, he joins up some of the issues and trends that dominate the world and tries to chart what will happen to them in the post-pandemic era.

Zakaria is a rational, thoughtful thinker and an excellent communicator who has essentially put together ten extended opinion columns like you regularly see in the Washington Post. His hypothesis is simple: that COVID-19 is acting as an accelerator to existing global trends. The book is thus “not about the pandemic, but rather about the world that is coming into being as a result.”

He paints a picture of a world whose population has benefited enormously from globalization but that is also threatened by the development of humanity at such unparalleled speed. He likens humanity to the fastest car ever made but one without safety features. Indeed, Covid itself likely came from our ever more intimate proximity to animals, and in his barrage of statistics reminds the reader that humans slaughter 80 billion animals a year for food.

Zakaria is a rational optimist who argues that during such tumult we must remember that positive change is more possible during a period of great change. He advocates a more sustainable human development outlined through ten short lessons.

The first is that we’ve moved beyond a political debate characterized by left and right and instead are in a period that will be defined by arguments as to the quality of government. He goes back in time to track and trace the medieval legacy of state power that grew in response to diseases and their ability to enforce quarantines, to the expectations placed on the modern state to handle the pandemic. Zakaria is scathing of the Trump administration’s response to Covid; “by July, with less than 5% of the world’s population, the country had over 25% of the world’s cumulative cases.” But he argues that this failure goes beyond the White House to the wider political science of the US having 90,126 units of state and local government that is “second rate at all levels” and that has been exposed by disease.

As we must recalibrate our politics Zakaria writes that must we understand how Covid is challenging economic orthodoxy and revealing that markets alone are not enough. Predictably as an expert on global affairs he urges the pandemic to make us listen again to the experts. Yet his picture of how populism has supercharged culture wars and fissures across America and beyond is left as a problem without a clear sense of a solution.

A recognition of Covid catalyzing advances in the digital domain begins with a somewhat predictable look at remote working but ends in a far more interesting examination of what Artificial Intelligence (AI) will do to fundamental concepts of human labor. He skilfully paints a picture of AI not replacing humanity but allowing it to refocus. A changing approach to labor will be paralleled by changes to the environments humans inhabit. While cities have been hit hard by the pandemic, they are still predicted by 2050 to be home to two-thirds of humanity. While surviving Covid has meant learning to distance from one another, it will not short-circuit human’s instinct to be social animals. However, Zakaria’s narrative is somewhat clouded by his self-professed “love” of cities, and the chapter lacks the grip and focus of the others.

up to 430 million people pushed into extreme poverty over the next five years. “Inequality will get worse” he warns, while also reminding readers of the perspective of the costs of the pre-pandemic world of poverty, including the 60,000 children that die of malnutrition in India each month. Yet Covid has also highlighted that the “most glaring inequality that infectious disease creates is between the healthy and the ill,” although again there is a significant gap between Zakaria’s portrait of the issue and the depth of thinking as to the solution.

The DNA of the book is a defense of globalization and like humanity’s fast car, he explains that “we are all connected and no one is in control.” Yet it is not clear whether Zakaria fully understands that for many the lack of control is terrifying and catapults them right into the political forces that would seek to push back against globalization. He acknowledges we’re likely to see a “modest de-globalization” but is stubborn in his belief that the interdependence of the world is too deep to be reversed.

If globalization is here to stay, what of US power? Zakaria argues against the standard talk of the US’s decline but instead writes that a bipolar world is very much due to the “rise of the rest.” Covid shows the need for more multilateralism than less, yet President Trump has taken America out of more treaties, institutions, and accords than any president in history.

Zakaria’s general idealistic realism is refreshing. However, Zakaria’s grasp of the big picture and his ability to channel such a wide narrative in a very readable format should be commended.