The Last of the Live Nude Girls: A Memoir 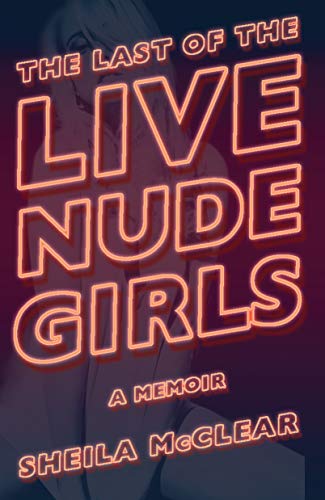 “. . . a richly informative read, helped by Ms. McClear’s erudite, laconic style. Most importantly, The Last of the Live Nude Girls offers a unique fragment of New York history that allows us to better understand a specific aspect of the Times Square underworld at the very moment before its demise.”

When the Warner Brothers store in Times Square erected a bronze statue of Daffy Duck in full street hustler garb hawking watches from inside his overcoat, New Yorkers must have sensed that a certain way of life, synonymous with the crossroads of the world, was, if not dead, then certainly dying. In the late 1990s and early 2000s studies that spoke of the dismantling of old Times Square and its seedy institutions became ever more common.

Peter Sillen’s short documentary film, Grand Luncheonette, captured with nostalgia the closure of one of Times Square’s last remaining lunch counters, the likes of which were iconic hangouts for the Beat Generation.

Sheila McClear’s The Last of the Live Nude Girls: A Memoir is a valuable addition to this body of work. It, too, examines the redevelopment of Times Square and the precarious nature of its institutions; however, its narrative perspective is somewhat unique: Ms. McClear offers a detailed personal account of life as an Eighth Avenue peep show girl.

The Last of the Live Nude Girls recounts the author’s life from her arrival in New York City from Detroit in 2006, to the point she quit the peeps for full time work in journalism. Ms McClear’s first book is a sharp and relentlessly honest memoir, vividly capturing an important moment in the history of Times Square. The author takes up a key vantage point in the city, witnessing both the surreal parade of misfits trawling the Eighth Avenue swathe and the ever intensifying waves of gentrification that would eventually sweep them away.

Ms. McClear skillfully depicts the seamy world both inside and outside of her peep booth without crudity or salaciousness. On the contrary, the author is conscious to avoid heavily graphic sexual description, favoring subtlety and inference. Nor is her memoir a bitter attack on peep show habitués. Ms. McClear introduces the reader to all manner of creeps, fetishists, and stalkers, yet it is rare for her to pass judgment.

The true strength of The Last of the Live Nude Girls is in its balance. Ms. McClear speaks of life as a peep show performer, yet she also shows an understanding of the many reasons that the customer is drawn to visit the booth. The book ends by acknowledging the “live girls and men who watched them.”

The author demonstrates an acute awareness of the peep show’s function in Times Square as a liminal space used to act out fantasy and live out alter egos, but also as a bolt hole for the poor, lonely, outcast, predatory, or just downright odd. Ms. McClear admits to becoming a “scholar on the history of Times Square,” using her time between shifts to read authors such as Joshua Alan Friedman whose work caricatured the pimps, prostitutes and runaways that frequented the area in the 1970s and 80s. Her profound understanding of the historical, social, and cultural ramifications shaping Times Square is evident throughout the memoir.

The Last of the Live Nude Girls offers a starkly personal account of life as an Eighth Avenue stripper. Ms. McClear arrives in New York City as a naïve 20-something from Michigan, yet it is not long before she is savvy to the esoteric Times Square underworld, able to pick out the “Murphy men” and the so called “wolves.” The author discusses her sense of nihilism when performing and she speaks of the importance of not looking at the customers, rather, at her own reflection in the glass. This, she states “was the only way to do the job.”

Her memoir depicts the manner in which the live girls develop a tough emotional carapace able to deflect the leers and judgments of customers and fellow dancers alike; however, it also reveals the psychological toll of performing. Ms. McClear describes panic attacks, momentary dizziness, a psychosomatic sensation of itching when working the booths, and the manner in which many girls turn to drink or drugs as a coping strategy.

The Last of the Live Nude Girls also touches upon the banalities of life in the peep show: the endless waiting for customers, the slopping out of bodily fluids from the booths, and how the booth itself is operated. Yet the memoir is also punctuated with short, oddly beautiful glimpses of nocturnal New York. At one point Ms. McClear depicts a bride and groom standing on the dirty sidewalk, at another she describes a snowfall on the avenue as she walks home after her shift. In certain respects, these passages share a kinship with Close to the Knives, David Wojnarowicz’s iconic memoir of homelessness and hustling, in their representation of the surreal, lurid, neon phantasmagoria of Times Square.

At the end of the memoir, Ms. McClear includes a 15-page potted history of the Times Square peep show. This study could be criticized for its tendency to lean a little too heavily upon quotations taken from the New York Daily News. Ms. McClear neglects to draw fully upon the robust body of research she has utilized to inform the memoir itself. But the fact that Ms. McClear’s history of the peeps is a little thin in terms of supporting evidence can be forgiven as it is not intended as a strict academic study. The author adeptly matches the tone of the study with that of the memoir itself.

Ms. McClear begins with an anecdote about the first peep show as recounted to her by an elderly customer. She goes on to chart the appearance of “what the butler saw” Mutoscope in the late 1800s, brothel windows on the Bowery, the invention of the first peep show booth and culminates by detailing Mayor Giuliani’s anti-porn drive and its consequences for the live nude girls. This history allows the reader to contextualize the preceding memoir, by pinpointing Ms. McClear’s arrival on Eighth Avenue at a time when the peeps were under severe pressure from City Hall and gentrification.

This book may deal unflinchingly with semen, urine, and Lysol—the three pervading substances to grace the glass, walls, and floor of the peep show booths—yet it by no means leaves the reader feeling filthy. It is in fact a richly informative read, helped by Ms. McClear’s erudite, laconic style. Most importantly, The Last of the Live Nude Girls offers a unique fragment of New York history that allows us to better understand a specific aspect of the Times Square underworld at the very moment before its demise.