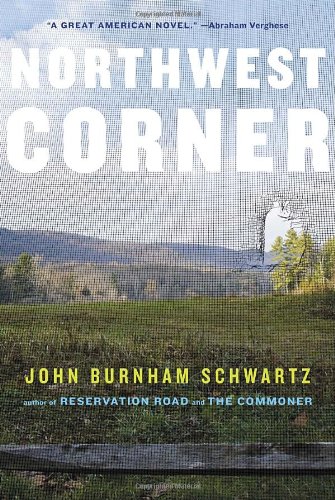 “Northwest Corner demands to be read in one sitting, . . . Mr. Schwartz is capable of beautifully poetic prose, . . . [and] the novel is written with an absolute honesty that comes only with experience. It examines tragedy, but also deals with the day to day struggle of family life: a father’s insensitivity, a mother’s growing loneliness, and a son’s bid to stand alone. . . . an intuitive, well-wrought novel that never forfeits the reader’s attention for a second.”

John Burnham Schwartz’s Reservation Road told the tragic story of two families devastated by a hit and run accident in which a young boy was killed. The novel was a marked success, selling over a quarter of a million copies, and becoming the basis for a major motion picture.

Frustrated, Sam finds himself tangled in a petty bar fight in which his attacker is seriously injured. The young college student flees to Santa Barbara where his estranged father has set about building a new life as a sports store manager. What follows is a raw cut of American family life. The characters of Northwest Corner excavate profound emotional depths that every reader will, at some point, find familiar.

Mr. Schwartz adopts a similar narrative approach to that of Reservation Road, which was told from the alternating viewpoints of Ethan and Grace Learner, the father and mother of the 10-year-old Josh killed on Reservation Road, and from that of the perpetrator, Dwight Arno.

Northwest Corner, however, adopts the viewpoint of no more than five different characters: Dwight and his ex-wife Ruth; Sam; Josh’s sister Emma; and Dwight’s casual girlfriend, Penny. With short alternating chapters devoted to each, Mr. Schwartz aims to replicate the pace and suspense which led readers to devour Reservation Road.

Make no mistake: Northwest Corner demands to be read in one sitting, yet within this complex frame of narrative voices, Mr. Schwartz runs the risk of losing his minor characters. This is certainly the case with Penny, whose character remains starkly underdeveloped to the point that she often appears superfluous to the plot.

Those who have read Reservation Road will undoubtedly have a richer understanding of a number of the characters found in Northwest Corner, yet knowledge of its predecessor is by no means essential.

As in Reservation Road, Dwight Arno’s narrative is written in the first person. His words meet the reader as an unflinching personal confession: the summation of his perceived failings as a father and as a man. Mr. Schwartz is at his best when surveying the gaping emotional chasm between his characters. The author skillfully depicts Dwight’s ongoing efforts to draw close to his son following his years of absence. As an examination of paternal love, Dwight and Sam’s story provides a razor sharp commentary on male reticence toward open displays of emotion.

Northwest Corner approaches the family home and its surroundings as a palimpsest. The history of the Arno family appears inscribed onto every item of furniture, every creaking floorboard and every yard of lawn. Some readers may find the author’s reliance on affectionate nostalgia somewhat syrupy. This is without doubt a mournful novel whose characters repeatedly look to the distant past in order to escape the pains of the present. Others will read this as a realistic coping mechanism for a set of characters steeped in turmoil.

Despite this, the novel is written with an absolute honesty that comes only with experience. It examines tragedy, but also deals with the day to day struggle of family life: a father’s insensitivity, a mother’s growing loneliness, and a son’s bid to stand alone.

Mr. Schwartz has an undeniable ability to create characters that are flesh and blood and to then empathize with their emotional frailty. Despite its few flaws, Northwest Corner is an intuitive, well-wrought novel that never forfeits the reader’s attention for a second.