Poseur: A Memoir of Downtown New York City in the ’90s 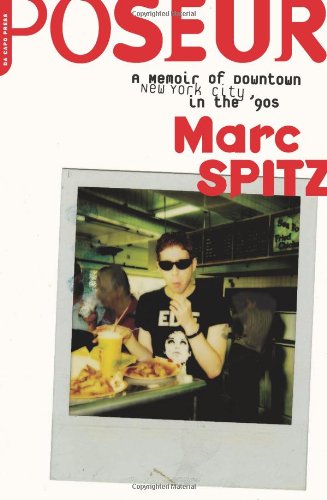 “Sadly for Mr. Spitz, we rarely look toward the sidelines to seek out the poseur.”

Remember when as a teenager you first painted your fingernails black because you believed that it lent you some form of dark intensity?

Or when you bought those pointed boots with chains because you wanted to be rock?

Or maybe a little later when you wore that battered old trilby and practiced the thousand-yard stare of the preoccupied poet?

The clothes were maybe never quite you, but they set you apart from your friends who still looked as though they were being dressed by their mothers. These poses edged you closer to those writers and musicians that you admired—even if you never achieved their level of creativity or rebellion.

Mr. Spitz, whose work has appeared in Spin, the New York Times, and Vanity Fair among others, is also the author of a number of rock biographies including Jagger: Rebel, Rock Star, Rambler, Rogue and BOWIE: A Biography.

This memoir’s most engaging element is its opening. It begins with 17-year-old Mr. Spitz riding in the passenger seat of his father’s Mustang, listening to “Don’t Let’s Start” by They Might Be Giants on cassette. His father takes exception to the lyrics: “No one in the world ever gets what they want and that is beautiful. Everybody dies frustrated and sad and that is beautiful.” Stopping the car in disgust he ejects the tape.

Later he asks his son whether he believes in the lyrics. Mr. Spitz recalls this confrontation with his father as being the first occasion of many when he was asked for his opinion on music. From that moment onward, he was a rock writer.

Mr. Spitz grew up in Lawrence, one of the Five Towns situated on the South Shore of Western Long Island. Manhattan, the locus of creativity, rebellion, and art, was a mere stone’s throw away and yet, for a teenager, frustratingly out of reach.

In many respects Poseur is Mr. Spitz’s love letter to downtown Manhattan. As a student of the prestigious Woodmere Academy, he describes how he would cut classes and ride the Long Island Railroad with the sole intention of being spat out onto the New York City streets at Penn Station.

The young Mr. Spitz describes himself as being in awe of the Manhattan street life—a place he felt he could earn an important education. This education came in some part from reading the Village Voice and in others by copping a feel of a peep show stripper’s fake breasts.

Mr. Spitz’s teenage tourism of Manhattan lands him some precious souvenirs: not least a bohemian mode of dress that intentionally sets him apart as an outsider in the more conservative Five Towns. Rummaging at the Gotham Books Mart he lays hands on a much fetishised copy of Charles Bukowski’s Women. It is not long before he wants to become Henry Chianski, Bukowski’s autobiographical character: disheveled, down, and out yet fiercely independent.

So intensifies Mr. Spitz’s nostalgie de la boue. His clamoring and clawing his way closer to the city’s artistic low life begins with throwing out his mother’s Formica furniture and asking to sleep on a mattress on the floor, followed by a move to Bennington, a liberal arts college in Vermont, where he loses his virginity, experiments with drugs, wears wire rimmed glasses, flannel and adopts the pose of a poet.

During a “sleeper semester” from Bennington, he does work study at the artistic venue The Kitchen, while staying at the infamous Chelsea Hotel courtesy of a stipend from his grandparents. It is here that a promising and energetic opening to the memoir descends into page after page of turgid name dropping.

On his journey to becoming a recognized journalist, Mr. Spitz rubs shoulders with everyone from Allen Ginsberg to Courtney Love. The author relies on listing whom he has met to the extent we suspect he is striving for greatness by mere association.

The title of the memoir is rather self-effacing in that it suggests he is a “poseur” who moves in elite musical and artistic circles but never achieves the level or conviction of his contemporaries.

And yet Mr. Spitz’s ego is a marauding King Kong let loose on Manhattan with Alice in Wonderland’s EAT ME cake and DRINK ME potion in each fist. At times he reveals himself to be the groveling admirer, worshiping at the feet of Morrissey and stealing a teacup from which he’d imbibed. At others, his memoir reads as a blustering attempt at self-mythologizing.

The focus never appears to be on Mr. Spitz’s chosen art: writing. The frivolity of looking and behaving like a great writer always takes precedence. Even the author’s heroin addiction emanates from him wanting to strike a specific artistic pose.

And yet via all of this posturing, there is a true sense Mr. Spitz has convinced himself he is among America’s great journalists and tastemakers. Among other irritating idiosyncrasies, the author relies on relaying endlessly dull lists of album titles, suggesting otherwise.

If we wish to read about pre-gentrification New York, we perhaps turn to the work of Herbert Huncke or David Wojnarowicz. For rock and roll memoir, we maybe turn to Keith Richards. At all times we strive for “in the thick of it” authenticity.

Sadly for Mr. Spitz, we rarely look toward the sidelines to seek out the poseur.