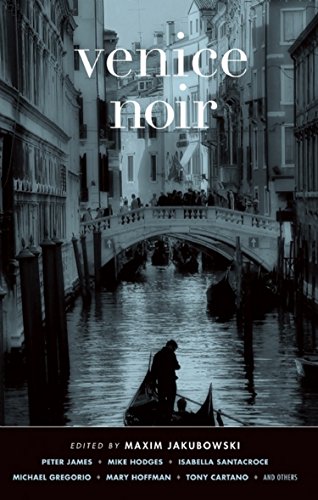 “Venice Noir is undeniably inconsistent, yet there are a few gems hidden here . . .”

When we think of Venice, our minds are drawn to a tourist packed Piazza San Marco or the image of the singing gondolier masterfully navigating the city of canals. Perhaps we picture Carnevale: the narrow alleyways crowded with revelers, a mysterious stranger wearing a long beaked “Medico della Peste” mask emerging menacingly from the throng. Or do we have a more idealized vision of Venice, such as that captured by Canaletto, Turner, or Monet?

Venice Noir, edited by Maxim Jakubowski, aims to shred through our preconceptions of this remarkable city. The 14 writers featured in this anthology of short stories take our travel brochure images of Venice and scatter them like confetti.

This title is a continuation of the award-winning location-inspired noir series published by Akashic Books. Its featured writers hail from Italy, America, Britain, France, Canada, and Australia, each of whom allow their noir imaginations to set sail on the city’s canals and waterways.

Divided into four sections, Amongst the Venetians, Shadows of the Past, Tourists & Other Troubled Folk, and An Imperfect Present, Venice Noir offers a cross-temporal, cross-cultural slice of the floating city.

Venice appears as the ultimate contemporary backdrop for the noir short, with its decaying foundations thrust firmly into the murkiest of depths, its bejeweled grandeur and decomposing beauty, its foggy alleyways and secret worlds.

For this reason, it seems to come as a missed opportunity that a number of the writers fail to pin their narratives more closely to the city’s unique topography. In his introduction, Mr. Jakubowski intimates a certain caution with regard to falling foul of the Venice cliché: “And there isn’t even a gondola in every story!” Yet it is important to stamp a specific sense of place on each of these noir shorts, a handful of which could essentially have been set in any world city.

Saying that, Mr. Jakubowski leads the line well with his own offering to the anthology, entitled Lido Winter. This is the story of a middle-aged man returning to Venice to recall his past love affairs. While wandering the streets of the city he encounters the most deadly lover of all.

Mr. Jakubowski writes with control and poise. He has a keen eye for the sensual materiality of life, the visible and invisible sexuality of the female body. This is Edgar Allen Poe’s The Man of the Crowd for the modern age. The reader is led through the backstreets of Venice eager to learn more about the mysteriously captivating woman who is first seen as a passenger on the vaparetto.

Another story of note is Emily St. John Mandel’s “Drifter,” in which a young widow, Zoë, arrives in Venice from Michigan via a meandering tour of the Northwest Territories and Europe. Zoë’s wandering is borne out of her chase for her husband’s ghost; the need to fill the gaping void left in her daily existence. Penniless and disoriented in a residential area far from St. Mark’s Square, she is approached by an enigmatic stranger who offers to pay her for the delivery of a package.

Meanwhile, Tony Cartano’s “Rendevous” is a refined, intelligently constructed cat and mouse tale of an adulterer and a cuckolded husband, while Michelle Lovric’s Pantegana offers a fascinating twist in perspective: Venice from a rat’s eye view; however, the true jewel in the Doge’s crown is “Signor Gauke’s Tongue” by Mike Hodges. This is the story of Lenny Gauke, a New York financier who has fled to Venice after his elaborate Ponzi scheme has backfired. This elegantly written short offers a flâneur’s view of “La Dominante” capturing the city’s decadence along with its darker underbelly.

A common criticism of the Akashic Books Noir series is the lack of balance with regard to the quality of writing. This is continually apparent in this particular anthology.

In many respects Venice Noir appears to encounter the many pitfalls of literary translation. Barbara Baraldi’s “Comissario Clelia Vinci,” about a young mother who is a murder investigator working for the Venice police force, has a strong storyline but from paragraph to paragraph sputters along with the staccato rhythm of an overheated Beretta.

But issues of translation cannot excuse the frankly awful “Little Sister” by Francesca Mazzucato and “Desdemona Undicesima” by Isabella Santacroce. The first is a charmless tale of a mentally ill woman who is tormented by smells. The second is a directionless float through Venice led by a voice from beyond the grave. Both are as difficult to swallow as a glass of water skimmed from the surface of the Grand Canal.

Venice Noir is undeniably inconsistent, yet there are a few gems hidden here for those prepared to look. The true strength of the anthology is the manner in which it makes us reassess our preconceptions of picture postcard Venice.

Mr. Jakubowski, look what you’ve done: The Queen of the Adriatic is weeping and there is blood beneath her fingernails.