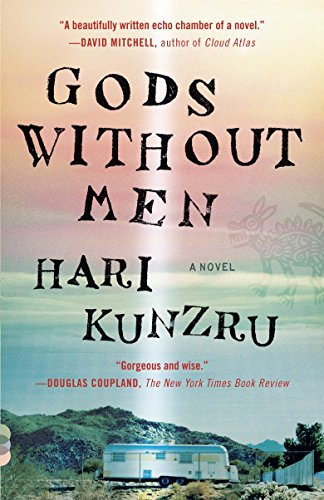 “Gods Without Men is a handful of desert sand in which each grain has its own unique history, provenance, and abrasion pattern. Mr. Kunzru’s diverse list of characters have blown in from the east and west coasts of America, the Middle East, and the Punjab to converge at the Pinnacles. The author clutches their fragmented lives together in an attempt to understand and capture the emptiness of the desert in its mystical entirety. . . . Gods Without Men is a stunning achievement. . . . Gods Without Men will undoubtedly prove to be one of the most important works of fiction published this year.”

Hari Kunzru was selected in 2003 as one of Granta’s best young British novelists, along with Zadie Smith and Monica Ali. His debut title, The Impressionist, was published on the heels of Smith’s White Teeth, the first British multicultural novel to be met with a media frenzy and significant critical acclaim. Immediate comparisons were drawn between the two novels, heralding the emergence of a new generation of multicultural cosmopolitan writers whose work drew upon and transcended British postcolonial fiction.

These writers examined the intersection of race, culture, and gender in the Western metropolis, and challenged the definition of what it meant to be “British” in the 20th and 21st centuries.

Four novels later, London-born Mr. Kunzru can be found residing in New York. His latest title, Gods Without Men, is set in the Mojave desert and centers around a mysterious three fingered rock formation called the Pinnacles.

The author prefaces his novel with three epigrams, the first of which is taken from Balzac’s short story “Une passion dans le desert:”

This epigraph not only explains the title of the novel; it bears a reminder of the desert’s limitless potential to distort and reveal the most profound of truths.

Gods Without Men is a novel of fragments, interlinked desert stories connected over the ages.

The novel opens with a contemporary psychedelic twist on Native American mythology. Entitled “In the time when the animals were men,” the chapter tells of the trickster Coyote’s journey into the desert to brew methamphetamine.

Subsequent chapters are given the name of the year in which they are set, beginning in 1947 with the story of a former aircraft mechanic named Schmidt, who is guilt ridden by his involvement with the Hiroshima bombings. Disillusioned by American society he drives into the Mojave and finds solace at the Pinnacles, a location he senses is a “natural antenna” to signal to inhabitants of outer space.

The second chapter, set in 2008, tells of British rock star Nicky Capaldi’s escape to the desert following a bust up with his L.A. record producer. In chapter three, also set in 2008, parents Jaz and Lisa Matharu embark on a disastrous vacation to the desert with their four-year-old autistic son, Raj.

The novel continues in this nonlinear vein. The reader is introduced to numerous desert visitors: an 18th century Jesuit, an 1870s Mormon miner with a murderous past, an ethnographer recovering from the horrors of the First World War, and a 21st century Iraqi family caught up in a U.S. military war game.

Gods Without Men is a handful of desert sand in which each grain has its own unique history, provenance, and abrasion pattern. Mr. Kunzru’s diverse list of characters have blown in from the east and west coasts of America, the Middle East, and the Punjab to converge at the Pinnacles. The author clutches their fragmented lives together in an attempt to understand and capture the emptiness of the desert in its mystical entirety.

The author’s primary focus is upon Jaz and Lisa, and the disappearance of their son Raj whilst visiting the Pinnacles. The wealthy New York couple, of Punjabi and Jewish backgrounds, become the centre of a Madeline McCann like witch hunt.

Jaz is a talented statistician hired to work on “Walter,” a financial computer program that tracks and predicts patterns and trends in life and his wife Lisa, a beleaguered mother with a history in publishing. Their marital struggles lead them to take a vacation in the desert, with devastating consequences.

After Raj vanishes, the couple becomes caught in the midst of a media firestorm: castigated by talk show hosts for their negligence, and branded as child killers in Internet chat forums.

Mr. Kunzru adroitly examines Jaz and Lisa’s anguish from the perspective of each partner. The literary skills of the author are showcased in particular by his description of Lisa’s nervous breakdown—a surreal slip between waking and dreamlike states, interspersed with shards of accusatory television footage and snippets of Internet trolling. This proves to be an unnervingly visceral study of human behavior.

Mr. Kunzru is forever keen to disorientate his reader. Historical echoes resonate off the desert buttes and mesas. In a chapter entitled “1920” a child surrounded in white light is spotted being led into the Mojave by a Native American, in “1958” a child disappears at the Pinnacles during the meeting of a cult seeking to contact extraterrestrial beings, and in “2008” Raj is finally spotted in the desert as a lone “glowing boy” through military night vision goggles.

The author does not willingly make connections between these phenomena. Rather than leading the reader by the hand, Mr. Kunzru prefers to abandon us in desert with an astrolabe. We must navigate this inhospitable terrain using that which is visible yet intangible, while maintaining a logical understanding of the direction in which he wishes to take us. UFOs wink sporadically from the firmament: a figment of the imagination or proof of life beyond our planet?

Some readers may feel frustrated by the sense of disconnection and disorientation that Mr. Kunzru intentionally creates. Many of his characters appear through a sandstorm only to disappear once again, without lending any further meaning to the novel itself. Other characters, such as the 19th century Mormon miner Nephi Parr are left sadly underdeveloped by the author.

Further criticism could be aimed at the predictability of certain elements of the storyline. We could perhaps guess that the benign star worshipping cult of the late fifties would turn into murderous Mansonesque hippies of the nineteen seventies or that Jaz’s work as a statistician on Wall Street would be impacted by the severe economic downturn of 2008. Yet to obsess about such details is to miss the point of Gods Without Men.

Gods Without Men is reminiscent of David Hockney’s photographic collage of the Mojave, “Pearblossom Highway” in the sense that it too offers a multiperspective study of the desert. Each chapter presents a specific temporal and situational shift, which as individual stories can appear thin and sometimes meaningless, yet as a collection create a layered time and space narrative of one subject: the Pinnacles.

In terms of stylistic ingenuity, Gods Without Men is a stunning achievement.

Yet it is also important not to overlook to breathtaking scope of this novel. In less than 400 pages, Mr. Kunzru examines America’s familial, cultural, and societal wounds and sutures by crafting a narrative that encompasses (in no particular order) Sikhs, Jews, Catholics, Mormons, Muslims, Native Americans, immigrants, hippies, cult members, pioneers, prospectors, missionaries, UFO believers, Wall Street bankers, and the military—among others.

Furthermore, the timescale of the novel spans over two centuries. Yet despite what would appear at first as severe over ambition on Mr. Kunzru’s part, the result is a thoroughly researched, fascinating and most enjoyable novel.

A reader searching for a neat, logical dénouement should avoid this book. Gods Without Men is ultimately a novel about chaos—the mystical gap between men and their perceived gods, laid bare by the desert sand; however, those willing to trust Mr. Kunzru as one of the best authors of his age will undoubtedly enjoy an enchanting, thought provoking journey through the Mojave Desert.

Gods Without Men will undoubtedly prove to be one of the most important works of fiction published this year.