London: A History in Maps 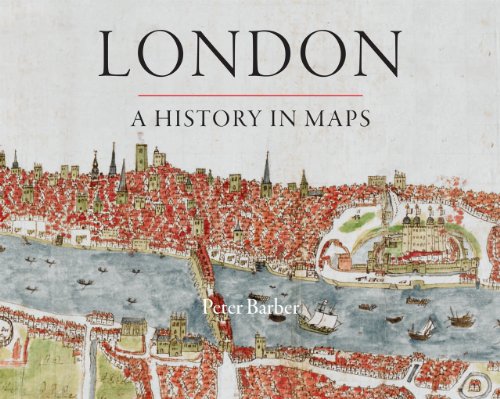 Tongues may still be wagging about London 2012. The British Isles were once renowned for producing great musicians along with sports stars who fell agonizingly short of greatness.

The London Olympics turned this notion on its head.

Great Britain gave the world Mo Farah, the first man to win the 5000m Olympic Gold on home soil, alongside Russell Brand, riding atop a psychedelic bus snarling out a sinister version of The Beatles’ “I am the Walrus.” Some viewers wondered whether Olympic anti-doping measures should be stretched to include the event organizers.

Meanwhile, in academia, the finest professors in the land prized themselves from their wingback chairs, set aside their sherry, and set about remythologizing London as the greatest, most fascinating city the world has ever known. Even the straw-thatched Mayor of London, Boris Johnson, published a pseudo-intellectual history of the capitol celebrating the flushing toilet, the bicycle and, of course, the Great British relic, Keith Richards.

Releasing on September 15, London: A History in Maps is in danger of being a late straggler in the flotilla, left bobbing placidly in the wake of Londonmania. Yet with the flag waving revelers dispersed, the Meccano kit Olympic rings disassembled, and the secret ground to air missile sites disarmed, now is surely the time to sit back with a cup of Earl Grey and enjoy everyday London in all of its glory—and let it be said: London: A History in Maps is the perfect book with which to do so.

The British Library boasts the second largest collection of maps in the world after the Library of Congress in Washington D.C. The collection holds some 4.25 million maps, atlases, globes, and books on cartography. Head of Map Collections is Peter Barber author of, among many other titles, The Map Book (2005) and Magnificent Maps: Power, Propaganda and Art (2010).

London: A History in Maps is Mr. Barber’s latest offering, a small paving stone of a book. The collection of maps featured is based on an exhibition about London held at the British Library from November 2006 to March 2007. Each map is accompanied by the original captions from the exhibition.

The study is ordered chronologically beginning with a symbolic view of London circa 1450, and ending with a series of maps signaling contemporary urban change: a census map showing South Asian immigrants residing in London in 2001, a bird’s eyeview of Kings Cross redevelopment, and a plan showing the extent of the London railway systems in 2012.

With each page, we witness London’s horizontal and vertical expansion. The collected work of London’s cartographers shows urban mass as a living entity, pushing forever outward. In its entirety, Mr. Barber’s book captures this energy and sense of organic growth. Included are maps of the city’s developing main veins and arteries revealing gas rivalries, the provision of electricity, and London’s first bypass.

Each demands close and lengthy observation. This is a coffee table book that deserves to be read and studied. London: A History in Maps has many highlights: the earliest known image of the capitol in the form of a gold medallion struck in Trier in 297AD, William Smith’s eye strainingly detailed view of London, Westminster, and Southwark from 1588, and illustrator Malcolm English’s psychedelic 1970 panorama of Carnaby Street.

Mr. Barber’s careful selection and ordering allows the reader to peel back layer upon layer of London’s history for him or herself. For example, Charles Booth’s color coded Master Map of London poverty is a dazzling visual example of how, in the middle of the 19th century, the capitol’s rich and poor were living almost literally cheek by jowl.

It requires little imagination on behalf of the reader to be transported to the streets of London in any stage of its development. It would be fascinating to take this book into the city, choose a map, locate oneself on it, and survey all that came before. Given the book’s weight, this activity would certainly offer vital resistance training as well.

Some readers may argue more commentary from the learned Mr. Barber would be appreciated instead of his relying on brief exhibition captions alone. But more often than not, the maps speak for themselves, and the book’s simple format and high quality reproduction of each map serves to encourage independent study.

Moreover, to bring this huge body of cartographic work out of the British Library archive and into the public eye is a truly Olympian feat and one for which Mr. Barber should be commended.

This is a beautiful and engaging book.

Turn off the surreal rerun of the London 2012 opening ceremony, and explore the ebb and flow of real life in the growing metropolis—its triumphs and failures— mapped from the city’s very beginnings.