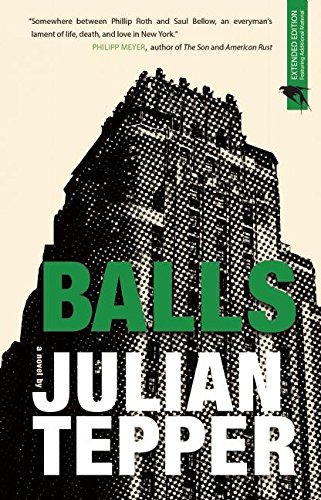 “. . . struggles to find cause for laughter in anguish. New York too becomes a slower, more stifling, monochromatic space.”

For a non-native New Yorker inhabiting Manhattan is rarely dull. Take the climate, for instance. All forms of weather are exhilarating when channeled down through midtown’s exaggerated vertical axis. Rain seems to fall heavier than anywhere else, sunlight seems more intense. There are, however, some days when New York feels inexplicably drab. Thankfully, those days are particularly rare and may depend solely on the individual’s frame of mind. They are, nevertheless, gray, somber, and difficult to shake.

Reading Balls by Julian Tepper is like experiencing one of those gray days. This is, admittedly, a book about a man who finds that he has testicular cancer. As a reading experience, it is not expected to be a walk in the park—all sunshine and neon lycra. And yet billed as a black comedy this novel hangs on the reader like fog, like anxiety. And that, it seems, is its entire point.

Thirty-year-old Henry Schiller is a New York songwriter and lounge singer. He is a worrier at heart, but when he senses a tightness in his groin he tries to pass it off as nothing. He refers back to a song he has written entitled “It’s Probably Nothing.” He struggles to tell his partner, Paula, a young, attractive, and ambitious violinist who he suspects is having an affair with her music teacher. Finally, he makes an appointment with the doctor only to be referred to a specialist where the grave truth is revealed.

Balls is a novel about an already insecure man coming to terms with having cancer. He ponders his potentially imminent death and ruminates on the real possibility that his salvation will come in the form of castration.

This is a mournful walk around midtown Manhattan. The city is rendered drab and lifeless by Henry’s mood. He floats between barrooms, doctors’ surgeries, and therapists’ couches considering whether or not he should have surgery.

The plot offers little else. There is a sense that this novel is an attempt to sing the praises of midtown. If so, then Balls is a dirge. Its unmodulated tone is one of an author enamored by the neurosis and wistfulness of Woody Allen’s New York films. Yet the comedy and charisma that makes Allen’s cinematography textured and engaging has been jettisoned here.

Henry finds himself in a series of understandably uncomfortable situations with doctors that are intended to raise a smile. Yet Tepper succeeds in transferring the relentless pressing weight of worry to the reader to the extent that little else can be enjoyed. We read on not because we have become fond of Henry. It is because we want the final prognosis. We want this to end.

Tepper’s debut lacks the required balance and craftsmanship to be a successful dark comedy. It accurately locates the acute sense of denial, fear, and helplessness experienced when an individual is confronted by a life threatening illness, but loses itself in this darkness. It struggles to find cause for laughter in anguish. New York too becomes a slower, more stifling, monochromatic space. Accurate, perhaps, as seen through the eyes of a seriously ill man, but not a terrain many will choose gladly to tread.