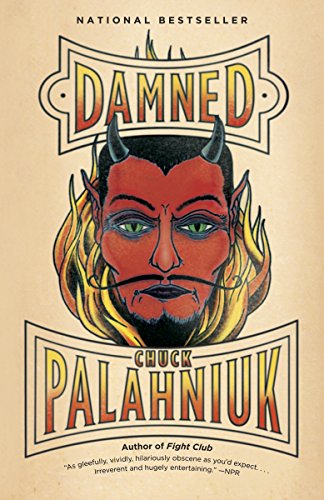 “As with all great literary agitators, Mr. Palahniuk tests how far he can take his humor—and then pushes further. . . . The truth is, Damned is a sick, clever, and terminally funny piece of writing that leaves an indelible dent in the reader’s conscience.”

“The way-fundamentalist Christian creationists were correct,” states Madison Spencer, narrator of Chuck Palahniuk’s new novel, Damned, “evolution was hokum, and we fell for it hook, line and sinker.”

The theological hypothesizing of a 13-year-old daughter of a Hollywood movie star would more often than not be dismissed as bunkum; however, Madison has witnessed at first hand Charles Darwin dragging his long graying beard through Hades. What Madison states is fact: She, too, is damned in hell.

Already, the moral crusader’s gorge has begun to rise. But wait, there is more. Imagine little Maddy cast into an underworld sculpted from all manner of human detritus. Picture her walking in the “Dandruff Desert,” surveying the “Great Ocean of Wasted Sperm,” and navigating the “Swamp of Partial-Birth Abortions.” See her climb the leg of the demon giantess Psezpolnica in order to pleasure the demon’s huge clitoris with the slobbering severed head of her punk sidekick. The easily offended stopped reading two sentences ago.

And sadly, the easily offended will miss out on reading a humorous, clever, and thought provoking novel. Imagine Alice Sebold writing for Mad magazine. Damned is undeniably controversial, intentionally uncomfortable and on the odd occasion hideously obscene. It is, however, a work of brilliance.

Sebold appears to be one of Mr. Palahniuk’s key influences when writing Damned. The novel clearly draws upon Sebold’s novel The Lovely Bones, which is narrated by a murdered 14-year-old looking down from heaven.

Madison lists her own creative influences as being John Hughes eighties teen film, The Breakfast Club, and a limited range of novels from Jane Eyre to those of Judy Blume. Mr. Palahniuk adjusts the style of the first person testimonial narrative to convincingly mimic the emotional and creative idiosyncrasies of a teenage girl. For example, each chapter of Damned begins “Are you there, Satan? It’s me Madison,” followed by a confession from the narrator, a nod toward Blume’s novel, Are You There, God? It’s Me Margaret.

The author is clearly aware that he is not the first to lead his reader through the fiery underworld. Within the first few pages he has Madison ridicule all accounts of hell written by the living. Dante Alighieri, for example is said to have “hoisted a generous helping of campy make-believe on the reading public.” Madison, on the other hand, is dead and therefore “a higher authority.” Mr. Palahniuk may humorously debunk all other literary depictions of hell, yet he demonstrates a profound knowledge of how literature and religion has shaped our perceptions of the underworld.

The novel examines how as kingdoms rose and fell, one god would supplant another, and how the prior ruling deity would be “cast into obscurity and contempt.” Leonard, Madison’s nerdy companion in hell, states that “if civilization lasts long enough into the future, one day even Jesus will be skulking around in Hades, banished and ticked off.” Mr. Palahniuk’s hell is one populated by demons that formerly reigned as gods in previous cultures.

One of the many factors that make this an impressive novel is the playfulness of the writing contrasted to the diabolic nature of the subject matter. Madison casually watches a fellow captive devoured by the Iranian demon Ahriman, only to see the body slowly regenerate from the discarded bones. Yet, she finds true horror in the fact that Babette, the busty cheerleader who inhabits the next cell to hers, is wearing fake Manolo Blahniks.

Damned provides a visceral study of the frivolous, materialistic nature of modern American life. In doing so, Mr. Palahniuk positions his crosshairs directly upon the Los Angelino glitterati. Madison’s parents are twisted caricatures of every white-toothed, fake-tanned, lyposuctioned, dermabrazed, pucker-lipped, ecomentalist celebrity to have graced the pages of Hello! magazine. We have specific Hollywood moguls in mind when we learn that they adopt children from scores of third world countries only to discard them in boarding or military schools, or when they refashion a Learjet to feature an interior “crafted of organic brick” and “knotty pine floors” all of which were “sustainably grown by the Amish.” The publication of Damned reaffirms Mr. Palahniuk’s position as one of America’s most wicked contemporary satirists.

Damned is not without its moments of hilarity. Toward the end of the novel Madison embarks on a rampage that involves taking on famed tyrants. In a schoolyard style brawl, she knocks Hitler to the ground and rips off his mustache as a souvenir.

Mr. Palahniuk’s decision to write a novel in the first person could prove wearing for some. In certain respects, reading Damned is similar to agreeing to babysit a teenager: Their know-it-all approach to life, smart alecky wit, and need for self affirmation may be endearing at first, yet it proves testing after prolonged periods of exposure.

Certain elements of the novel may also prove galling to even the most openminded of readers. As with all great literary agitators, Mr. Palahniuk tests how far he can take his humor—and then pushes further. Statements such as, “100 percent of people with AIDS are consigned to hell. As are all aborted babies. And people killed by drunk drivers,” are designed to make the reader flinch despite their heavy irony–Madison later informs us that individuals are sent to hell for honking their car horn one too many times. Similarly, her work in satanic telesales which involves her coaching the terminally ill to die, will not sit well with some.

It must also be remembered that Mr. Palahniuk wrote Damned in an attempt to come to terms with his mother’s death from breast cancer. It should not therefore be wholly mistaken as a black-hearted satire. In many respects the novel encourages us to rethink or even attempt to demystify death by stepping outside of life and prodding it from the other side. The narrator repeatedly reminds us that we too will be faced with death, sooner or later. When reading Damned it is impossible not to ponder the fragile nature of our own existence.

Mr. Palahniuk also tests the very confines of the novel itself. As with Fight Club, Diary, and Haunted, Damned displays elements of metafiction. Madison is adamant that unlike Jane Eyre or Rebecca de Winter, she is not simply a character in a book, and it is herself rather than an absent author that determines her fate. And of course, as we expect when reading Mr. Palahniuk, there is more than one twist in the storyline.

At the opening of Damned, Madison states, “critics and movie reviewers really, really count on there being no actual hell.” Read this as an ominous warning to the novel’s detractors. When threatened by fiery damnation, critics will no doubt declare this novel to be an extraordinary read. The truth is, Damned is a sick, clever, and terminally funny piece of writing that leaves an indelible dent in the reader’s conscience. In terms of its excoriating satire of Hollywood glamor alone, it should be judged by the highest standards.