Are We Nearly There Yet? A Family’s 8000 Miles Around Britain in a Vauxhall Astra 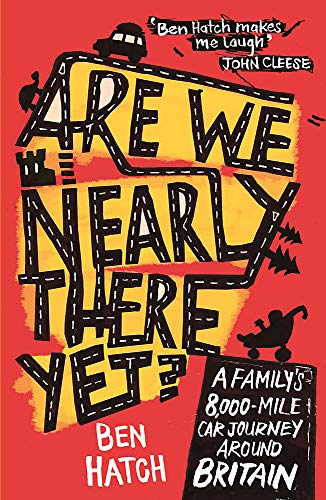 “Many readers will struggle to finish this book. Those who persevere will be looking at the final pages and asking forlornly regarding the end: ‘Are we nearly there yet?’”

Jack Kerouac’s On the Road is a novel that continues to motivate generation after generation of budding bodhisattvas to strap on a backpack and set out on a voyage of discovery. This thinly veiled autobiography is the story of young men traversing America’s great open spaces in search of “girls, visions and everything.”

If Ben Hatch’s new novel, Are We Nearly There Yet? A Family’s 8000 Miles Around Britain in a Vauxhall Astra, is remembered for anything it will be for the fact that it will deter families from taking to the road.

Mr. Hatch, on Granta’s 2003 list of the most promising 20 young authors in the U.K., was employed by Frommer’s to travel the British Isles by car with his wife and two small children with the aim of writing a guide book.

Are We Nearly There Yet? recounts the story of their trip: a tedious traipse around the major tourist attractions of England, Scotland, and Wales—and a tale of marital bickering, soiled diapers, and disconnectedness.

There are certain families that spoil it for everyone. They turn up at the park and smile as their children rip up the daffodils, throw karate kicks at the pigeons, and scream at the top of their lungs. Reading Are We Nearly There Yet? is like spending five long months in the close company of one of those families.

This is Mr. Hatch’s main source of comedy: chuckling as his “delightful” daughter Phoebe, four, and son Charlie, two, run wild. He expects the reader to laugh along with him when he describes how his wife Dinah stops at the roadside to allow Phoebe to go to the bathroom—and manages to track her daughter’s “poo” into the car.

This leads to the author’s second source of amusement: poo. If the British are stereotyped as having an unhealthy obsession with scatological humor, Mr. Hatch willfully confirms this stereotype. The word poo is often deployed tactically to lighten the mood. The author also describes in detail his bout of constipation in which he jabs a toothbrush into his rectum to loosen the blockage and how he defecates on a bat that unbeknownst to him has flown into the toilet bowl. Base humor indeed.

Mr. Hatch’s third and final source of merriment is drawn from the startling discovery that the people of Great Britain have regional dialects. When arriving at a new destination, the author and his wife find great hilarity in mimicking the way the locals speak. Scottish is reduced to an indecipherable: “a gig ag aye. Aye cran oer toooer.”

Furthermore, the locals are often depicted as being considerably dimmer intellectually than the Hatch family. The author succeeds in reviving regional stereotypes from a darker, less sophisticated age of British comedy.

The author’s description of the journey is a programmatic one, indicative of his past in journalism. Artistic embellishment is kept to a bare minimum, in favor of a “we do this, then we do that” approach. Often Mr. Hatch resorts to listing, which is little fun for the reader.

The factual accuracy of Are We Nearly There Yet? must also be called into question. Of course, the author is allowed to exaggerate and bend the truth—but . . . For instance, it is debatable as to whether the Hatch family traveled over 8,000 miles in 5 months in a country measuring 683.5 miles from north to south with fewer than 10,000 miles of trunk roads in total—a rather unimportant quibble. Yet when the author casually mentions that small pox, “the cancer of its time,” claimed the lives of “Queen Elizabeth I, Mozart and Abraham Lincoln,” we wonder if this is a peculiar attempt at self effacing humor. If not, we need only mention three words: John Wilkes Booth.

Mr. Hatch’s latest book is littered with factual gaffs. When staying at the Balmoral Hotel in Edinburgh he discusses dining at the Michelin starred restaurant, Hadrian’s Brasserie. The award-winning restaurant presided over by chef Jeff Bland is in fact referred to as Number One. He also mentions how Shakespeare wrote most of his work in Stratford upon Avon and even invents a slip road on the M5 motorway. The list goes on, revealing a somewhat sloppy approach to basic research.

If Are We Nearly There Yet? manages to shine in the heartfelt depiction of the author’s relationship with his dying father. Sir David Hatch was the Head of Light Entertainment at BBC radio. During the road trip the author repeatedly catches the train home to visit his father who is battling cancer.

Anyone who has nursed a parent suffering from a terminal illness will be moved to tears by Mr. Hatch’s lucid, yet gut wrenching account of the triumphs and bitter disappointments that come with palliative care; however, the author’s descriptions are often unflinchingly visceral, and the reader is left with the unmistakable odor of death in his or her nostrils.

Emblazoned on the front cover of the novel is an endorsement from the Monty Python actor John Cleese, a friend of the author’s father. It reads simply: “Ben Hatch makes me laugh.” Many readers will wonder how.

This is a painful novel to read, not simply because of the tragic personal loss the author suffers, but because the humor he uses to counterbalance that tragedy simply does not work. The result is a work as depressing as it is lowbrow.

Many readers will struggle to finish this book. Those who persevere will be looking at the final pages and asking forlornly regarding the end: “Are we nearly there yet?”