Lucking Out: My Life Getting Down and Semi-Dirty in the Seventies 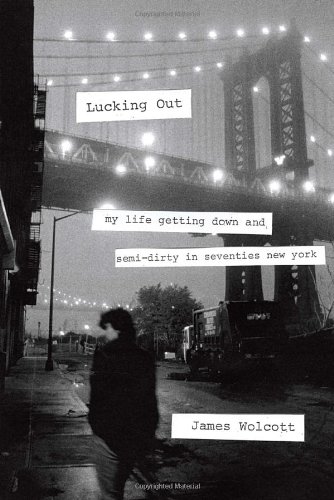 “Lucking Out is a must-read for anyone interested in New York at its most lurid. Moreover, it succeeds in chronicling the struggles of a young writer and the development of a formidable critical voice. . . . so utterly captivating . . .”

As Hurricane Irene bore down on New York City, James Wolcott was the subject of many a vitriolic tweet. In 2004 the long-time culture critic and blogger for Vanity Fair revealed to readers how he rooted for hurricanes.

The hurricane, in Mr. Wolcott’s opinion, was “Mother Nature’s fist of fury.” He wrote of the disappointment he felt when a hurricane failed to make landfall, it being a way for nature to “get some of its own back and teach us that there are forces greater than our own.”

It was all too easy, some thought, for Mr. Wolcott to cheer on a natural disaster that pummeled a territory thousands of miles from his opinion base. As Irene approached the culture critic’s own square of the New Jersey shoreline, tweeters twittered unsympathetically of retribution. Finally, Mr. Wolcott was to bear witness to the full impact of his beloved hurricanes.

Love or loathe him, the Vanity Fair writer and blogger is a renowned agitator. A recent tempestuous episode involving Piers Morgan sent ripples across the Atlantic. Mr. Wolcott referred to the English talk show host as a “canned ham” stating: “How did we get stuck with Piers Morgan? Who is he, why is he here, is he returnable?” Sadly, Mr. Wolcott, when it comes to Piers Morgan, the United Kingdom operates a strict no returns policy.

Lucking Out: My Life Getting Down and Semi-Dirty in Seventies New York is Mr. Wolcott’s third book. Given the critic’s killer reputation, many of his contemporaries will be poised to skewer this memoir long before its spine has been cracked.

Lucking Out begins in the autumn of 1972 with the arrival of the young and rather green Mr. Wolcott in New York. In his hand he holds a letter of recommendation from the novelist Norman Mailer. The memoir charts his time spent working at the Village Voice, riding the coattails of the distinguished New Yorker film critic Pauline Kael, mixing with Patti Smith, Tom Verlaine and Lester Bangs at CBGBs, observing the seedy Times Square underworld, attending the New York City Ballet, and ends on the evening of December 8, 1980 with the sound of a gunshot, as John Lennon is assassinated by Mark David Chapman.

Only the finest of New York memoirs are able to adequately convey the pace, energy, and centrifugal spin of living and working in the metropolis. By these criteria alone, Lucking Out demonstrates exceptional promise.

Mr. Wolcott comments on how, at grade school, his class was seated alphabetically and how as a consequence he often found himself pressed up against the back wall. This pattern forged his identity as “the classic wise guy in the last row, the classroom’s color commentator” and later informed his journalistic stance of wanting to “take everything in from safe afar . . .”

Certainly, if seventies Manhattan were a vinyl record revolving on a turntable, Mr. Wolcott and his coterie of fellow critics would form the cold steel spindle over which the record is placed; central, yet always at a measured distance from the needle and groove, the point of friction and true creativity.

When watching gigs at CBGBs, Mr. Wolcott admits to stationing himself at the very back of the room, at film screenings both he and Pauline Kael favor the back row of the cinema, and as a resident of the West Village he confesses to being “a bystander in his own neighborhood,” voyeuristically observing gay men cruising between the trucks of the original High Line from his apartment window.

Mr. Walcott’s reluctance to get too close partly explains the title of his memoir. The author succeeds in getting only “semi-dirty” as he barely allows seventies New York to graze him with her grimy elbows. Yet his stance of being “a part of yet apart from” the Manhattan crowd is by no means a failing, rather, it lends a lucidity to the memoir which is perhaps lacking in others of the period.

Lucking Out is a fascinating memoir of off-limits interiors. Mr. Wolcott leads us down the silent, austere corridors of the New Yorker, where walls were kept bare because “ostentation was considered poor form and vulgar taste” and “noise was the loudest intruder of all.” We then push through the CBGBs crowd to gasp a breath outdoors only to be showered with glass bottles, dropped from the Palace Hotel men’s shelter above, or duck into the restroom to see the CBGB sex-chart which scored musicians on their prowess. Later, we sit sipping at the Algonquin with Pauline Kael and her contemporaries.

Outdoors, we are treated to all the beauty and squalor of 1970s Manhattan. Lucking Out is, in part, a blue valentine to a seamy, salacious, savage New York that exists no longer—E. B. White’s Here Is New York for the “spread-eagled decade.” Mr. Wolcott writes: “The seventies novels that mean the most to me are the ones that expressed, distilled and bottled a mood.” Lucking Out reveals the author to be a master distiller.

Having said that, Mr. Wolcott does not forget to comb his hair and go to work. His memoir is a concise insider view of the New York literary scene: sycophancy, back-biting, verbal jousting, and full-blown dragon slaying included. Gore Vidal swats the young Mr. Wolcott for his admiration of Norman Mailer, Barbara Epstein mistakes the author for a delivery messenger, and New York Review of Books contributor Renata Adler poleaxes Patricia Kael with her article “The Perils of Pauline.”

It is of little surprise that the tastemakers of New York were a hard-bitten crew. Mr. Wolcott himself takes up a rightful place in the ‘poison squad’ of the nineteen seventies. Yet, his memoir is remarkably self-effacing. The author goes as far as to admit that he “sometimes winces at the nasty incisions” he inflicted on writers.

Nevertheless, Mr. Wolcott is complicit in mythologizing the doyennes of his industry, along with the early habitués of CBGBs. He writes: “Lore is the publicity that lasts long after there is nothing left to publicize.” In doing so Pauline Kael becomes the peerless encantado of film criticism, and Patti Smith the ice queen of a rock and roll republic.

Norman Mailer ghosts through the memoir, his presence being the literary benchmark to which Mr. Wolcott aspires. It is amusingly disturbing, however, when the author admits that “he horse-whispered to himself”—that he actually channeled Mailer before making love to his first real girlfriend.

Susan Sontag also has an oddly spectral presence in the memoir; her name is synonymous with the author’s disillusionment, his life on the slide. In the final chapter, Mr. Wolcott writes of her amusement regarding Adler’s “crucifixion” of Kael: “Sontag gagging with laughter is not a picture to linger over.”

Lucking Out is a must-read for anyone interested in New York at its most lurid. Moreover, it succeeds in chronicling the struggles of a young writer and the development of a formidable critical voice. The author goes about his task with the utmost poise and control, drawing a wide yet detailed perspective.