The City that Became Safe: New York’s Lessons for Urban Crime and Its Control 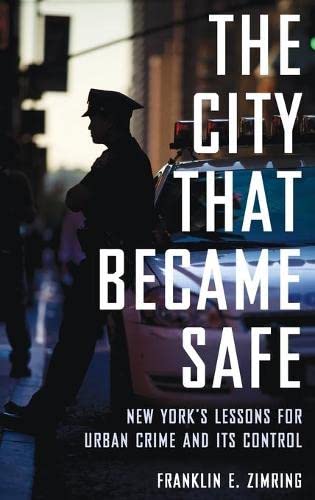 “Accessible to both undergraduates and postgraduates, this is an excellent statistical study. The reader should not expect the master code that unlocks all of the secrets of New York’s crime decline; however, The City that Became Safe should be considered a standard work on this fascinating phenomenon.”

On September 12, 2011, the BBC News reported, “Thanks to police tactics and a change in culture, pickpocketing has almost vanished in New York City.” Reporters spoke to Detective Frank Cunningham, who joined the academy in 1985 when “the city was like a cesspool, like the wild, wild west.”

Detective Cunningham was assigned to Manhattan South Borough Wide Anti Crime, a street level, plain clothed unit specializing in pickpockets, chain snatches, grand larceny and any other form of robbery. He left the unit in 1992 for a stint in narcotics, just as New York “started hiring more cops.” When he returned in 1997, to his utter disbelief, “there was a Disney parade on 42nd Street.” The city had become safe.

Between 1991 and 2000 the United States witnessed a 40 percent drop in crime. What was even more astonishing was that New York City experienced a drop that lasted twice as long and was twice as large. Franklin E. Zimring’s statistical study, The City that Became Safe: New York’s Lessons for Urban Crime and Its Control, looks beyond Detective Cunningham’s assertion that the city “started hiring more cops” and attempts to seek out the many causes behind the largest crime decline on record.

The City that Became Safe is divided into three parts: Part One: Anatomy of a Crime Decline, Part Two: In Search of the New York Difference, and Part Three: Lessons and Questions.

In chapter one, The Crime Decline: Some Vital Statistics, Professor Zimring outlines the singularity of New York’s crime decline and the manner in which it undermines traditional understandings regarding the connection between urban crime rates and urban populations. In particular, the author examines the character and timing of the crime decline.

In A Safe City Now? the author examines how New Yorkers in 2011 take a consistently low crime rate for granted. New York is indeed a safe city, particularly in comparison to its crime profile at the turn of the 1990s; however, the novelty regarding urban safety has passed. Residents of the metropolis expect safety on the streets. Professor Zimring compares New York to other metropolises, both within the United States and abroad and finds New York City to have a “very low crime setting when compared to cities in the West.”

Part Two opens with Continuity and Change in New York City. Here, the author examines any determining factors which my have influenced the city’s unique urban crime decline, including fundamental shifts in institutions, population, policy and character.

Of Demography and Drugs: Testing Two 1990s Theories of Crime Causation focuses on demographic and drug use trends in New York and elsewhere, examining how drug related homicides fell less dramatically in other cities. Professor Zimring also discusses trends of imprisonment in New York and other major cities, and critically interrogates different ways to measure the divergence between New York trends and those of the rest of America.

Policing in New York City identifies a number of policing strategies that had probable success from 1990 onward. The author draws upon the embrace of aggressive tactics, staffing, strategic and tactical changes, as well as “stop and frisk,” “broken windows,” and “quality of life” approaches to urban crime.

The final part of The City that Became Safe begins with Open Questions. This chapter addresses unsolved questions with regards to New York’s crime decline which Professor Zimring earmarks as a priority of future research. The author organizes the “need to know list” into five main headings: “(A) The Unsolved Mystery of Particular Cause; (B) Four Questions about Crime Rates in the Future; (C) The Dynamics and Limits of Preventative Policing; (D) Where Have all the Criminals Gone; and (E) The Impact of Lower Crime on High-Risk Populations and Areas.”

Lessons for American Crime Control’s intention is to examine the assumptions that can be made from New York’s crime decline regarding future control of urban crime and violence. The author discusses the malleability of urban populations and the manner in which the most subtle changes within the framework of a city can have the potential to yield dramatic results.

In Crime and the City, Professor Zimring draws his study to a conclusion, pondering the manner in which modest changes in the structure and characteristics of the city heralded a significant crime decline in New York.

Dr. Zimring’s argument is erudite, thoroughly researched, and supported by detailed statistical analyses and graphs throughout. The author’s prescriptive approach may prove a little tedious for many general readers drawn to the text by its alluring title. It must not be forgotten that this is an academic study based on statistics. Professor Zimring tells the story of the New York streets using numbers alone. There is no attempt to draw close to the individuals that walk the streets, to understand the crime decline on a personal level. This, however, is not the author’s duty or intention.

Although The City that Became Safe concludes that little is known about urban crime or the mix of forces that drive it down, it is a valuable academic text because of the manner in which it strives to demonstrate how the operating forces which produce epidemic waves of crime are essentially superficial, manageable and non essential aspects of urban life. Professor Zimring’s study also sets out an important manifesto with regards to future research.

Accessible to both undergraduates and postgraduates, this is an excellent statistical study. The reader should not expect the master code that unlocks all of the secrets of New York’s crime decline; however, The City that Became Safe should be considered a standard work on this fascinating phenomenon.