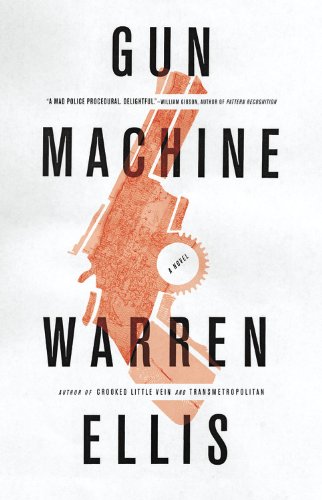 There is one New York and there are innumerable New Yorks: 740 Park Avenue, home to more billionaires than any other in the U.S. and Park Avenue in the Bronx, where poverty is endemic. Then there is Broadway and beneath it the Wickquasgeck trail, the age-old Native American pathway that the contemporary thoroughfare now follows. And of course there is Gotham City, that dark comic book vision of the metropolis that slides over nocturnal New York like a sullen photographic negative.

English author Warren Ellis understands New York as a multilayered palimpsest. In his outstanding latest novel, Gun Machine, he sets about the meticulous task of excavating layer after layer of the city, unearthing a murderous history that he ties to the present day.

NYPD detective John Tallow is in the initial throes of post traumatic stress disorder following the fatal shooting of his partner in an apartment block stairwell on Pearl Street. Having felled the killer, Tallow examines a stray shotgun round that has pierced a plasterboard partition. Unable to force the door, he orders a uniformed officer to take out the wall. The apartment beyond is found to be a cathedral to guns, with each room filled from floor to ceiling with all manner of pistols carefully arranged into one intricate pattern.

Each of the guns has a history: all were used as a murder weapon in New York—from a refurbished Asa Waters flintlock used in a shooting in Rochester in 1837 to the .44 Bulldog used by Son of Sam. The unknown collector is found to be an assassin who sources firearms with a history relevant to his contemporary kills.

The NYPD recoils at the potential magnitude of the case. Given no time to process the death of his partner, Tallow’s punishment for uncovering the cache is to head the investigation himself with meager resources. He is assigned a team of two Crime Scene Unit Officers: Scarly, a belligerent no nonsense lesbian who enjoys being roughed up by her partner, and Bat, a snide desk jockey with an aversion to food.

Author Ellis’s take on a detective jaded by his duties and struggling to deal with the trauma of the recent past is so sharply observed it becomes almost a satire of the realism strived for in television police dramas such as “The Wire.” The silent cracking of Tallow’s emotional resolve is, on occasion, palpable. The dread of a panic attack grips and squeezes at the reader, causing us too to reel: “Tallow gathered it all and tried with every internal guard he could muster to push it all down into that awful gaping hollow sensation in his chest.”

On other occasions, Mr. Ellis drags us forcefully away from the real by offering the reader a villain who is so impervious to emotion that he could only have been clipped from the pages of a comic book.

“The Hunter,” a contract killer and stockpiler of weapons, is an excretion of pure Gotham. He believes that he is descended from the Lenape tribe that inhabited Manhattan before colonization. He lives in a time slip between precolonial Mannahattan and the contemporary metropolis. As he walks, the streets recede before him to reveal the flora and fauna of the once Lenape hunting grounds.

Tallow struggles to decipher the code of this enigmatic and indomitable killer who sees murder as an art, and lives for the ritual of his next kill.

The slow, methodical ways of the tribal hunter-gatherer are then juxtaposed by the onslaught of cutting edge technology. As much as Mr. Ellis realizes that Manhattan bears the scars of ancient trails beneath its asphalt, he also recognizes the invisible web of the information superhighway pulsing through the city at an ever increasing pace.

Tallow discovers that the apartment block which housed The Hunter’s arsenal has been bought up by Vivicy, a banking company on account of its location having good “pingback”—making data transfer to Wall Street faster by vital milliseconds. Here Ellis considers the technological rather than spatial importance of location.

This idea is further explored in his description of the quasi futuristic methods of security firm Spearpoint, whose operatives tote guns with cameras mounted in the sights, and whose clients mount stickers in their shop windows which feature a motion detector and webcam, the data of which is collated to attain an “all seeing eye” on the city.

The manner in which Mr. Ellis borrows from and pays tribute to Manhattan’s past, present and predicted future makes for a clever, clever story evoking the earthy darkness of the island’s long lost forests and illuminating it with a fiber optic flicker.

Gun Machine gives the fast paced, visceral detective story a sublime new treatment. Here is a book anyone interested in the Big Apple should read—it is not only a hunt for an unforgettable killer, but a quest to exhume the many New Yorks that have evaded our eye.