I Never Knew That About New York 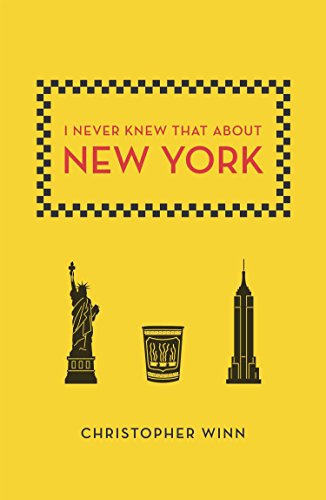 “I Never Knew That About New York is magical on account of its cumulative nature. The dense proximity of so many glistering shards of knowledge is what makes this book sparkle. It begs the reader to share its facts.”

A number of years ago, when writing my PhD thesis about New York City, I ventured out to a bar with my supervisor. All was going well until a man in a string vest placed a fifty pence piece on the edge of the pool table and challenged us to a game. He was a native New Yorker working in England as a mental health nurse. While thrashing me at pool he took some delight in firing pop quiz questions at this limey who professed to know something about his city. His New York trivia left me all but stumped.

Had I read I Never Knew That About New York by Christopher Winn, I could almost certainly have batted most of those provocative questions back at him, and perhaps caught him out, too. Mr. Winn’s engaging new book proves that there is always more to learn, even for those who have taken the time to study the city for years.

The study begins at the southern tip of Manhattan, with the opening chapter entitled New York Harbor. Chapter by chapter we move northward through the neighborhoods, following the course of Broadway until we meet the Harlem River. Each chapter is arranged as a walk, meaning that I Never Knew That About New York could easily be slipped into a coat pocket and taken out into the city, Mr. Winn’s intention: that the book be thought of as “an entertaining friend, one who loves New York and can tell you some of its stories and secrets.”

In this respect, the study works particularly well. The reader can chose a chapter and follow a walk, step by step, learning about the city as he or she goes. Mr. Winn’s amiable tenor achieves that of a learned walking companion, imparting intimate details of New York, corner by corner, block by block. Alternatively, it is equally rewarding to dip randomly into the study and learn one or two interesting facts or read from cover to cover, such is the book’s agreeable versatility.

As for the research, Mr. Winn has clearly spent significant time excavating and polishing thousands of sparkling little nuggets of New York information. Few readers will know that the Statue of Liberty is no more than a nickname, the official title being: ”Liberty Enlightening the World.” Others will be surprised to discover that the world’s first cinema opened in a converted New York shoe store.

The book is peppered with world firsts. A section on “New York’s Matchless Array of Tallest Non-Religious Buildings in the World” is particularly charming featuring tiny illustrations of each of the blocks, spikes, and needles. The illustrations, featured throughout the text, come courtesy of Mr. Winn’s wife Mai Osawa and prove an elegant addition.

Walk into any Manhattan bookstore and head to the New York section, and you’ll be sure to be overwhelmed by the number of books on offer. Some will offer more comprehensive, detailed studies of the city. Others will feature stunning photography. But none will be quite like this one.

I Never Knew That About New York could be criticized for its superficiality: its obsession with trivia encumbering a deep study of the city. It also must be said that the book somewhat runs out of steam as it approaches Harlem, the chapter on 110th St. to the Harlem River proving remarkably thin given the expanse of territory covered. Nevertheless, to criticize this book for what is missing is to somewhat miss the point.

I Never Knew That About New York is magical on account of its cumulative nature. The dense proximity of so many glistering shards of knowledge is what makes this book sparkle. It begs the reader to share its facts. Try to read a page without passing on at least one gem of trivia to the next person you meet.

There is no shortage of books about Manhattan, but this is a welcome addition on account of its refreshing playfulness. It reminds newcomers and New Yorkers alike that the great metropolis is forever stimulating, strange, and surprising.