Johnson's Life of London: The People Who Made the City that Made the World 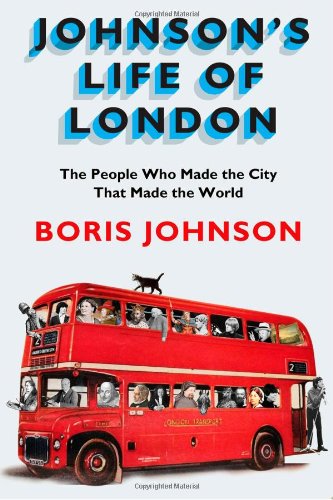 At the beginning of May this year Boris Johnson, or “Bo-Jo” as one of the tabloid newspapers recently dubbed him, clinched a narrow victory over Labour Party candidate Ken Livingston to become mayor of London for a second term.

In his acceptance speech, the perpetually tousle-haired former editor of The Spectator referred to London as “the greatest city in the world.” The vauntingly titled Johnson’s Life of London: The People Who Made the City that Made the World is Mr. Johnson’s love letter to the British capital.

The turn of the millennium heralded the publication of a number of groundbreaking studies of the history of London. In terms of its scope London: The Biography (2001) by Peter Ackroyd is among the most notable, along with London: A Social History (1994) by Roy Porter, and Stephen Inwood’s A History of London (1998), which Mr. Johnson refers to in his acknowledgements as “the most readable, thoughtful and interesting one-volume book about London and its development.” (Incidentally, Mr. Johnson convinced Dr. Inwood to “speed read” his first draft of Life of London).

Each of these studies is the product of decades of research crossed with a nigh obsessive interest in London and Londoners from landmark events which shaped the city to the minutiae of everyday life.

Peter Ackroyd commented: “London has always provided the landscape for my imagination. It becomes a character—a living being—within each of my books.” His biography of the city is a labor of love, an 800-page masterpiece attempting to capture what Ackroyd refers to as “infinite London.”

Published over a decade later, how does Johnson’s Life of London fare against such historical heavyweights? The short answer is that it is not even a serious contender. Checking in at a rather puny 336 pages, Mr. Johnson’s study is a lightweight in comparison.

Yet is it truly necessary for Mr. Johnson to stand toe to toe with Ackroyd, Porter, et al? The ground the author sets out to cover is unsurprisingly similar to that of the aforementioned academic studies, beginning with Boudicca and ending in the modern day metropolis. And it is clear from its onset that this study has no intention of capturing London in all its infinitesimal detail.

Mr. Johnson offers a decidedly more journalistic approach. He has no desire to ruminate on each and every minor detail regarding the capital’s intricate past. Rather, he draws upon specific historical figures, events, and miscellanea he himself finds engaging or humorous as a way of initiating a potted history of London.

For example, in a chapter entitled The Suit, the author begins by marveling at how contemporary businesswear was first conceived in the British capital. A sparse sketch of Beau Brummel and Regency London follows. Mr. Johnson takes a similar tack in chapters with such diverse titles as The Flush Toilet, The Bicycle, and Keith Richards.

The result is a far more anecdotal, breezy, if not at times somewhat frivolous examination of London’s past. The author’s tone is conversational: “You think the flush toilet was invented by Thomas Crapper, don’t you? Think again, my friends.” Mr. Johnson writes in the same manner in which he talks: eccentric and stutteringly muddled, yet with a befuddled charm and schoolboyish wit interrupted by the occasional unexpected profundity.

Coming from the pen of an Old Etonian, much of Johnson’s Life of London reads like discarded flashcards gathered from the debating society floor. The debate? London is the greatest city in the world: discuss.

This, indeed, forms part of the book’s deceivingly naïve appeal. Yet it also serves to remind us that Johnson’s Life of London is an important piece of rhetoric. The book was published in Great Britain on October 27, 2011, six months before London’s mayoral election. The author’s love letter to London forms an integral part of his electoral campaign.

At a Tory Party conference in March 2012, Mr. Johnson unveiled his nine-point plan to secure “Greater London’s future.” The basic framework of this plan is clearly visible in Johnson’s Life of London.

For example, point number four states Mr. Johnson’s intent to “make our streets and homes safer with 1000 more police on the beat.” Lo and behold, in a chapter entitled The Bow Street Runners, the author lectures on the history and ongoing importance of the police force: “They are not there to be directed by interior ministers to break down your door in the night. They are not Securitate. They are not even gendarmes or carabinieri. They are meant to be part of the street scene: unarmed, friendly and willing to tell you the time.”

Less than a decade after the death of Jean de Menezes, who was shot by British police officers after being mistaken for a suicide bomber, and in the wake of numerous controversies regarding the excessive use of force exerted by the Metropolitan Police, particularly with regard to the “kettling” of protestors, Mr. Johnson has a clear and specific agenda when attempting to revive the image of the benevolent neighborhood bobby.

Similarly, in a chapter called Ping-Pong the author comments on how in the 19th century “sport after sport was codified in Britain—usually London . . . Men have been punching each other in the head since the beginning of time . . . But it was in London in 1867 that the Marquess of Queensberry gave his name to the modern rules, with their careful stipulation about gloves, holding and so on.”

Mr. Johnson goes on to locate London as the virtual epicenter of the modern sporting world. This is particularly apt given that the city will host the 2012 Olympics, an event over which the newly re-elected mayor will now preside.
Incidentally, point number seven of Mr. Johnson’s nine point plan: “ensuring a true Olympic legacy—11,000 new homes and 10,000 new jobs.”

Of course, Mr. Johnson discusses the development of the London Underground and the Routemaster Bus; transport being one of the bigger bees buzzing about inside Boris’s blonde thatched bonnet—see point number eight: “reducing Tube delays 30% by 2015. Building Crossrail and orbital links to our suburbs. Extending the bike hire scheme.”

Mr. Johnson devotes an entire chapter to the importance of the bicycle, which was not invented in the British capital but was, according to the author, improved upon and made suitable for the urban environment by the London inventor, Denis Johnson.

It soon becomes evident that the book before us is part jovial historic jaunt, part manifesto. This should come as no surprise. What better way for a campaigning mayor to declare his adoration of a city?

By composing this study of London’s past, Mr. Johnson is attempting to write himself into London’s future. For this reason, Johnson’s Life of London cannot occupy the same shelf as Peter Ackroyd’s London: A Biography or Stephen Inwood’s A History of London.

Despite Mr. Johnson’s apparent passion for the city, his work should not be mistaken for a balanced historical study of London founded upon years of scholarly research. His agenda lies elsewhere.

When historians come to examine the British capital at the beginning of the 21st century, they will surely consult Johnson’s Life of London, an act revealing perhaps more about the current mayor and his preoccupations than it does about the great city.

For the rest of us, this book is about as amusing and unpredictable as Mr. Johnson himself.