The Sexual History of London: From Roman Londinium to the Swinging City—Lust, Vice, and Desire Across the Ages 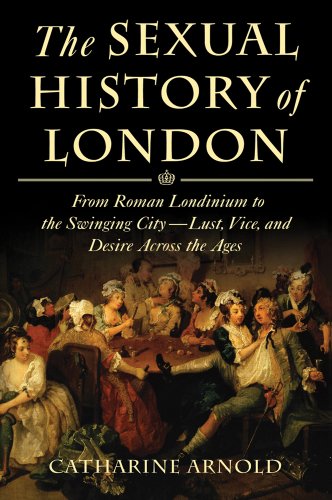 “Ms. Arnold’s magnificent chronicle of sex throughout the ages not only helps us to understand the history that shaped the capitol’s current desires, fetishes, kinks, and peccadilloes, it also allows us to return to the city, book in hand, to excavate London’s deep sexual terrain.”

In October 2009, a Catholic priest branded as “the devil in a dog collar” was jailed for eight years over a string of sex attacks on young boys at St. Benedict’s, a leading Catholic School in north London.

In early November 2011, Lord Carlile of Berriew’s report into St. Benedict’s found that the monks in charge were guilty of a “lengthy and cumulative” failure to protect pupils from ongoing abuse. The report recommended that the Benedictine monks should forfeit control of the school. The Press Association reported that “a number of monks and teachers at Ealing Abbey and the neighboring independent school in west London have been linked to alleged abuse from as far back as the 1960s.”

London, the capital of sin, is seldom far from scandal, and Catharine Arnold’s The Sexual History of London: From Roman Londinium to the Swinging City—Lust, Vice, and Desire Across the Ages is proof that it has always been so. Regarding the clergy alone, Ms. Arnold describes prostitution in the medieval nunnery, makes reference to the Chaucerian monk whose main passion is “hunting, animals and women,” and details the manner in which “many of London’s most attractive churches were actually built on the proceeds of prostitution.” The author demonstrates how the church was entangled in sexual scandal from its very beginnings in the capital: an alternative explanation, perhaps, of how so many Bibles found their way into London hotel rooms.

Ms. Arnold’s previous studies of London include Necropolis: London and Its Dead and Bedlam: London and Its Mad. The Sexual History of London is an odyssey that begins with the Romans constructing their timbered lupanaria, or brothels, by the Thames and ends with Belle de Jour, and her lucrative career as a high-class call girl and Internet blogger.

The study is divided into 14 chapters, with a focus on Medieval, Tudor, Stuart, Georgian, and Victorian London. The author’s examination of the Roman, 20th, and 21st century capitol yield decidedly thinner chapters. Nonetheless, this is an enviably broad yet detailed piece of research.

Ms. Arnold writes with a conversational clarity, never forfeiting her intellectual precision and poise. She proves expert in seeking out humorous or shocking anecdotes about the minutiae of everyday life, yet her work is never reduced to mere triviality for she maintains a steady eye on how the sexual landscape of London shifts and develops as a whole.

The author’s ability to draw from the literature of a specific age in order to illustrate a specific mindset, mood, or environment is admirable. For example, when examining the complex dynamics and decadence of the court of Charles II, she turns to the most notorious of rakes, the Earl of Rochester, quoting his wickedly salacious ditty, “The Debauchée.” Alternatively, when describing the “wanton behavior” found in the city’s theaters, she reaches for Dryden.

Ms. Arnold’s discussion of Samuel Pepys’s sexual exploits and failings is particularly amusing: “from an ‘experiment’ when he lay down on the floor of his boat . . . and, by fantasizing about a beauty he had spotted at Westminster Hall, came to orgasm ‘without the use of my hand’ to a confession that he was so aroused by the queen and her retinue at Mass on Christmas Eve 1666 that he masturbated during the service.” A very merry Christmas indeed.

What is perhaps most impressive about Ms. Arnold’s approach to London throughout the ages is the manner in which she treats the city as a complex palimpsest. When discussing sailors visiting brothels on the Ratcliffe Highway in the mid 1600s, she is aware that the Romans left an earlier imprint by transporting slave girls to the very same spot to service their troops.

The author goes on to reveal that “Codpiece Lane became Coppice Lane, but there was nothing that could be done with Sluts’ Hole, which was transformed into Sluts’ Well before disappearing forever into the Tenter Ground in 1700.”

Ms. Arnold, a journalist, academician, and Nottingham city councilor who read English at Girton College, Cambridge, reveals that following her graduation she fell upon financial hardship and worked as a high-class escort in London. The author informed This Is Nottingham that far from looking like a “conventional hooker” she “was a gamine public-school girl with a fresh complexion and a good figure,” and that she was “never hard off enough to be a real Mayfair Mercenary.”

This barely warrants an intake of breath. The fact is that Ms. Arnold uses her personal understanding of the esoteric underworld of London’s sex trade to great aplomb. The result is an, if not tender, then certainly sympathetic depiction of prostitutes throughout the ages, which refrains from judging or condemning the girls or their profession. The author is nonetheless a realist; in the course of their trade these are smart ladies, “hardworking girls.”

A few readers may argue that by favoring London’s sex workers Ms. Arnold upsets the balance of her study. For example, the author discusses how Mother Needham charges her girls for clothes before allowing them to work in her brothel, so that they are immediately in debt. The links to sex trafficking in contemporary London are all too apparent, yet the author declines to make the obvious connection.

This is by no means the only reason to read The Sexual History of London. It is one of the most erudite, accessible, and well-researched books of its kind, further discussing the changing terrain of gay London, the exotic sexual kinks of Londoners throughout the ages, and the history of pornography.

Ms. Arnold ends, somewhat fittingly, with Andrew Marvel’s “Ode to His Coy Mistress,” a poem which, in her own words, declares that “sexual desire is the most basic of human impulses, the desire for the ‘little death’ (‘la petite morte’ or orgasm) . . . it is our way of defying the tomb.”

As we read, London’s sexual underworld continues to throb relentlessly. Another month yields another scandal springing forth from the church, government, or corporate world. Ms. Arnold’s magnificent chronicle of sex throughout the ages not only helps us to understand the history that shaped the capitol’s current desires, fetishes, kinks, and peccadilloes, it also allows us to return to the city, book in hand, to excavate London’s deep sexual terrain.