Paris versus New York: A Tally of Two Cities 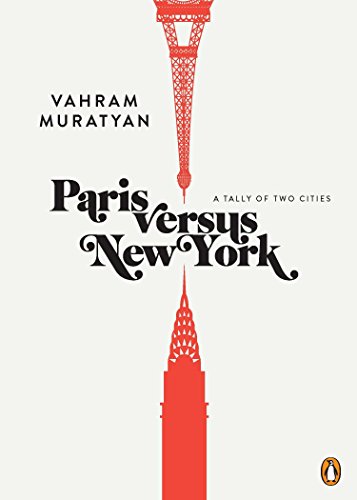 “In its entirety Paris vs. New York is a book that encourages playfulness. Some readers may feel inclined to play one city off against the other, awarding points to the icons which they favor and ending with a final score. Others may treat it as a form of Rorschach test and see in each diptych a personal memory related to time spent in Paris, New York or both. . . . Paris vs. New York is a stunningly inventive piece of work. Original, engaging, and intelligently conceived, yet executed with a simplistic beauty, this book handles the artistic collision of these two culturally diverse cities with an acid sharpness, style, and precision.”

The “Paris-New York” exhibition staged in 1977 at the Pompidou Center in Paris examined in detail “how the capital cities of modernism had reacted to one another in our century.” The hyphen joining the names of the two metropolises was surely inserted by the exhibitors with all of the thrill and apprehension of a child dropping Mentos into a two-liter bottle of diet cola.

“Manhattan is a counter-Paris, an anti London,” wrote the architect Rem Koolhaas in Delirious New York. To an extent he is correct: There is a constant sense that the “old world” city continually resists or repels the new, and that their coming together could trigger some form of sociological eruption.

In The Locked Room, Paul Auster wrote, “[Paris] was an old world city, and it had nothing to do with New York—with its slow skies and chaotic streets, its bland clouds and aggressive buildings. I had been displaced, and it made me suddenly unsure of myself.”

Conversely, when visiting New York the Paris based cultural theorist Jean Baudrillard commented: “Why do people live in New York? There is no human reason to be here, except for the sheer ecstasy of being crowded together.” Such is the tension between Paris and New York, so disparate are they in character, that moving between the two cities appears to trigger, in some, an acute sense of disorientation, a cultural dumbfoundedness.

Yet despite their apparent polarity, the cities are inextricably linked. Long before Lady Liberty’s feet were planted firmly on Bedloe’s Island in New York Harbor, her disembodied head surveyed the gardens of the Trocadero Palace, as an exhibit of the 1878 Paris World Fair. In 1908, the drivers of The Great New York to Paris Automobile Race awaited the crack of the golden pistol in Times Square before battling through Alaskan snow and Siberian mud to arrive 169 days later at the finish line on Boulevard Poissoniere.

It is, however, the dotted lines of transatlantic migration that tether the two cities most tightly together. In the late seventeenth century Parisian Huguenots fleeing their country found shelter in New York. Almost two hundred and fifty years later Paris became a city of exile and center of bohemianism for many American writers, artists, and performers escaping the narrow provincialism of the Midwest and the malaise and hypocrisy of Manhattan.

Placing the two cities in direct competition, as Vahram Muratyan has done in Paris vs. New York: A Tally of Two Cities is a provocative gesture to say the least. Mr. Muratyan, a French art director and graphic designer, was born and grew up in the French capital. “Paris is known for her charming streets,” he writes in his introduction, “her infinite possibilities, her mystery; I love her for her unpredictable moods, her whimsical nature, the whirlpools that churn beneath her surface calm.”

Mr. Muratyan first experienced New York as a child: “The first time she and I meet, I am five and dwarfed by the Big Apple. Later, as a teenager, I experience an exhilarating feeling of sensory overload before the never-ending skyline . . .”

His idea for Paris versus New York was conceived on the New York subway, whilst sketching those around him: “ideas come, go, and come again. I write some down, forget others. I draw an espresso cup facing a giant coffee to go, a bent-over old lady facing a grandmother in jogging pants. A series of pairs takes shape on the page. . . . And so, my Paris versus New York blog comes to being . . . The blog turns into an experiment for the book you now hold in your hands.”

The result is a series of diptychs: visual juxtapositions of the key iconography that shapes the urban identity of Paris and New York. Mr. Muratyan’s graphic art is an ultra minimalist, color-block approach captioned with retro typography.

Each diptych provides a subtle yet striking commentary on transcontinental difference. The espresso cup facing the giant coffee to go provokes a comparison of the pace and quality of life in the respective cities; the Parisian preferring to stop and observe life, the New Yorker drinking whilst on the move; the French demand for good quality coffee served in independently owned cafés versus the American infatuation with quantity over quality, and the ubiquitous coffeehouse chain.

The diptych entitled “les rues” contrasts the rigid grid system of the new world city to that of the Hausmanized rues and ruelles of the old, underlining a divergence in urban form whilst also hinting at a contrasting approach to location and movement within the metropolis: the possibility of becoming physically lost in the twisting alleyways of Paris against the potential of becoming rationally lost in the numbered New York gridiron.

Paris vs. New York is nonetheless a competitive yet friendly paring of the two cultural capitals. As Mr. Muratyan states, it is “dedicated to all lovers of Paris, of New York and those who are torn between the two.” Consequently, the artist’s diptychs often succeed in tying the two cities together rather than writhing them apart. “La Station” demonstrates the similarities between “la bouche” of the Metro and “the globes” of the subway entrance. “L'ingénieur” reveals correspondences between the structure of the Eiffel Tower and the internal framework of the Statue of Liberty. Meanwhile, “le fromage” tallies the Parisian love of cheese with the New York love of cheesecake.

In its entirety Paris vs. New York is a book that encourages playfulness. Some readers may feel inclined to play one city off against the other, awarding points to the icons which they favor and ending with a final score. Others may treat it as a form of Rorschach test and see in each diptych a personal memory related to time spent in Paris, New York or both.

Whatever approach the reader chooses to take, it is clear that Paris vs. New York is a stunningly inventive piece of work. Original, engaging, and intelligently conceived, yet executed with a simplistic beauty, this book handles the artistic collision of these two culturally diverse cities with an acid sharpness, style, and precision. The result is a seductive new departure for the way we view and understand cities.

We wait with bated breath to discover on which subject the artist will next fix his uniquely intuitive gaze.