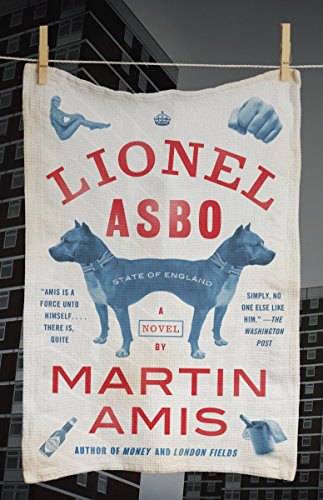 When we think of Martin Amis’s best work, we think of the grotesque. In Money we were introduced to the character John Self, a hideous embodiment of eighties degradation and decadence; the rapacious nature of capitalism personified.

In his latest novel, Lionel Asbo: The State of England, Mr. Amis turns his witheringly satiric gaze directly toward the British underclass, and it is here that we encounter the author’s most grotesque creation to date.

Lionel Asbo is a terrifying lager lout and repeat offender whose life is transformed when he wins 140 million pounds on the lottery whilst serving time in prison. Lionel, who changed his name from Pepperdine to Asbo to express his pride in being the youngest person to receive an Anti-Social Behavior Order, lives in Diston, a fictional enclave situated in the east end of London.

He is the uncle and ward of Desmond Pepperdine, an aspiring teenager of mixed race who is involved in a sexual tryst with his 39-year-old grandmother.

Should Mr. Amis’s deadpan satire bear any truth, then “the state of England,” to reference the novel’s provocatively judgmental subtitle, is one of utter and irrecoverable degeneration. The England that the author depicts is reminiscent to that of cartoonist Ralph Steadman’s caricature of Britannia: grizzly, pitiful and wasted, festering in a dump of spent cigarette butts and discarded beer cans.

At the beginning of the novel, Asbo is 21 but has all of the world weariness and mindless cynicism of an aging East End gangster. His avuncular advice to Desmond consists of instructing the teenager to always carry a knife at night, and to forgo entering into a loving relationship in favor of watching pornography.

As a parvenu, Asbo sports shoes which are “ten thousand pounds apiece,” drinks champagne from a beer mug, and dribbles lobster juice down his shantoosh blazer, yet continues to force Desmond to pay rent, takes away his beloved dogs for the sake of 400 pounds, and feeds him a turnip when he arrives at his out of town mansion.

Yet Desmond too evades our sympathy, slipping somewhat effortlessly into Mr. Amis’s rogues gallery of detestable characters. We almost admire him for striving to get an education, for not pandering to the every whim of his multimillionaire uncle—but we simply cannot forget his incestuous romp with his dear old nan.

It appears that the author hates every single character he has created in Lionel Asbo, along with the ground they walk on. “Threnody,” a thinly veiled caricature of British glamor model Jordan, is a vacuous yet viciously ruthless media whore who enters into a relationship with the newly minted Asbo only to abort their first child as part of a publicity stunt. Even Asbo’s closest friend prostitutes his own wife in return for money.

The author has a perpetual habit of sneering at the characters he creates. Asbo not only marks his stupidity by frittering away his money in the expected manner, he is also mocked on account of his patterns of speech.

“Truck: pronounced truc-kuh (with a glottal stop on the terminal plosive)” chides Mr. Amis’s aloof narrative voice. Desmond’s semiliterate attempts to write a letter to an agony aunt are met with similar disdain.

Mr. Amis has been a resident of New York for the past two years. In writing Lionel Asbo he has, from the comfort of his Brooklyn townhouse, trained his full arsenal of weapons of mass destruction on the British capital, entered the ignition code and firmly depressed the red button. The result? London reduced to a wasteland.

All of this appears more than a little unfair to the good people of Britain. There is something uncomfortable about a privileged author mocking the poor and the uneducated.

Moreover, it is questionable as to whether Mr. Amis is now close enough to this particular strata of British society in order to understand, simulate, or even satirize their everyday lives.

Many readers will dismiss Lionel Asbo as both cruel and out of touch.

And yet those of us who live in close proximity to those real life characters upon whom the hideously grotesque Asbo is based, those of us who witness their belligerence, mindless thuggery, and casual disregard for others on a daily basis, will secretly relish this vindictive, poisonous stab at Britain’s yob culture.

Lionel Asbo is another finely crafted novel and in many respects indicative of Mr. Amis’s gradual return to form which began with the razor sharp House of Meetings and continued with The Pregnant Widow.

The realism of the satirical rendering of its target, however, is highly debatable in terms of its accuracy and validity.