Hitchhiking with Larry David: An Accidental Tourist's Summer of Self-Discovery in Martha's Vineyard 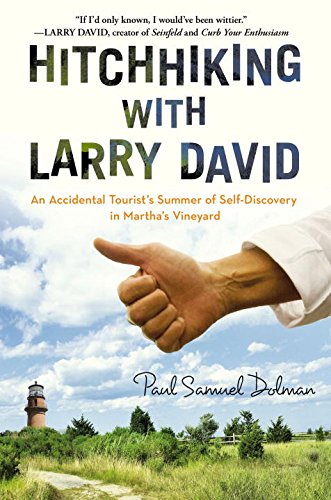 “an overindulgent act of naval gazing.”

This book is not about Larry David. This needs to be made clear from the very beginning. If readers are uncertain as to how or why Larry David features in this memoir, here are the facts.

After a split with his partner, the author, Paul Samuel Dolman, retreats to his parental home on Martha’s Vineyard where he cycles around the island trying to “find himself.” He bumps into the creator of Seinfeld and Curb Your Enthusiasm on no more than a handful of occasions. Mr. David offers Mr. Dolman a ride and they share polite conversation. Mr. Dolman then writes a book tacked loosely onto these fleeting events.

The author boasts regularly about not having watched a single episode of Seinfeld or indeed Curb. And yet Mr. Dolman appears to suggest that he has some form of profound connection with Mr. David based solely on the fact that their paths happen to cross more than once on an island less than 21 miles in length.

Their first encounter is perhaps the most revealing. The author is hitchhiking and reciting the mantra “Not to worry; the perfect car will pick me up.” The perfect car is, or course, driven by Mr. David.

Their conversation is recounted in script form. After exchanging small talk, Mr. Dolman attempts to press for intimacy with questions such as “Larry, have you ever felt lost?” “Do you believe in fate?” and “What brings you satisfaction?”

Despite being the focus of this impromptu interview, reminiscent of James Lipton’s guest questions at the end of Inside the Actor’s Studio, Mr. David answers politely without giving too much away.

The car journey nears its end with Mr. Dolman remarking: “Wow, this really is a magical ride,” to which Mr. David replies, “Maybe for you.”

Even from their first encounter, there is an immediate sense that the author is the proverbial flea on the elephant’s back, although the flea knows more of the elephant than Mr. Dolman does of Mr. David, and indeed enjoys a longer ride.

Fans of Seinfeld and Curb will feel bitterly disappointed by a book entitled Hitchhiking with Larry David that reveals little about the esteemed creator other than his willingness to tolerate a pseudo-philosophical line of questioning from a hitchhiker.

If this book has very little to do with Larry David, then what is it about? It is, in essence, an overindulgent act of naval gazing.

Mr. Dolman is a self described “Successful White Guy” whose entertainment/consulting business has started to “kick out some pretty serious cash.” Yet something is missing in his life. An internal voice repeats: “You have more than enough. Let it all go, and go find your self!”

A rather clichéd act of soul searching commences. He becomes a motivational speaker. He writes a few screenplays. He reads Soul Agreements by the “well-known spiritual author” Dick Sutphen. He meets a girl whose surname is Miracle. And from their point of meeting, he refers to her as “the Miracle.” Some readers may experience nausea.

The relationship breaks down, and the author retreats to Martha’s Vineyard and the “Parental Asylum” to lick his wounds. Mr. Dolman is utterly disparaging toward his parents and their tastes, perhaps only because they would rather watch Seinfeld together than do downward facing dog while chanting the Maha Mantra backward at sunset beneath the spirit tree.

This is of course somewhat of an exaggeration, and yet the memoir is littered with so much self aggrandizing quasi-spiritual claptrap. Mr. Dolman shares shaky reference to beautiful and profound works, including that of Kahlil Gibran, Zen Koans, and Greek proverbs, and yet his own interpretations of life and individual circumstance range between glib and cloying.

When discussing Mother Teresa the author blurts out: “Don’t you find her kind of annoying?” and then follows with “I’m kidding. She amazes me; what a heart.”
Later, after hearing a Mark Twain quote, he responds with “Your words are timely. My own heart feels like it has a crack in it.”

The dialogue is uniformly stiff, syrupy, and insincere. There is a distinct sense that the author much favors the cult of celebrity to embarking on any meaningful spiritual quest.

Those drawn to the memoir on account of Larry David’s rapier wit will find little of the same here. The first meeting with Mr. David is indicative of the tone throughout.

Mr. Dolman refers to the writer and comedian as “fellow Homo sapien, Larry David,” adding the footnote “Attorney’s Note: Homo sapiens, or humans, are bipedal primates in the family Hominidae. This reference is in no way meant as a commentary on Mr. David’s sexual preference.” This is smart Alec writing without the smart.

The picturesque landscape of Martha’s Vineyard manages to squeeze past Mr. Dolman’s voluminous ego on occasion to briefly reveal its beauty. This is one saving grace for a tedious memoir which will certainly sell copies on the basis of having Larry David’s name on its cover.

In response to this book’s publication, Mr. David commented, “If I’d only known, I would have been wittier.” If only Mr. Dolman had taken a similar approach.