Becoming Hitler: The Making of a Nazi 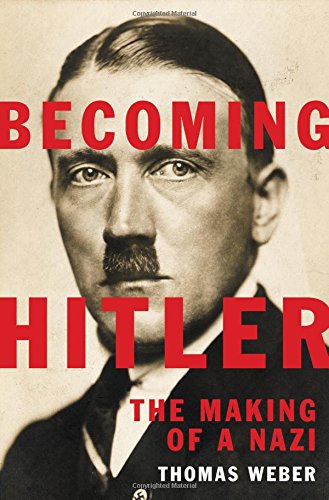 Ever since April 30, 1945, the spirit of Adolf Hitler has floated across the minds of Western Europeans and North Americans like a vampiric miasma—a perennial threat that is often invoked whenever something vaguely right-wing becomes popular. As author Thomas Weber writes in Becoming Hitler, this vigilance is good, but is almost always misdirected.

“The story of Hitler’s metamorphosis is equally that of how demagogues are made, and of the making of a particular one who should not be mistaken as representing all demagogues,” Weber writes. More importantly, “when confronted with new emerging demagogues, history may not be able to tell us until it is too late whether the writing on the wall points toward a Hitler . . .”

Sadly, for those who believe that globalization, the spread of liberal democracy, and interconnected trade is the solution to humanity’s history of conflict, the Viennese stock exchange’s crash in 1873 opened a Pandora’s box that has yet to be closed. In the wake of economic instability and dysgenic culture, demagogues have stepped into the void. Hitler, Stalin, Mao, Lenin, and Pol Pot have just been the most genocidal of these post-1878 dictators.

Weber’s book frequently invokes the story of Pandora’s box, with Bavarian conservatives, German military officials, and even a handful of Social Democrats playing the role of Pandora. For these groups, Hitler was a tool—a rabble-rouser who could be co-opted for their own ends. At first, Hitler gave every indication that that he could be a pliable.

Despite all of Hitler’s later revisionism, he served the Bavarian Army with loyalty, but not with distinction. The other men in the List Regiment liked him, but considered him a loner and a member of the Etappenschweine (“rear-echelon pigs”).

When the war ended, Hitler returned to Munich and did everything he could to stay in the army. For Weber, this was an early indication of Hitler’s long-held desire for a surrogate family and stability. This also meant that from 1918 until 1919, Hitler served not only the socialist government of Kurt Eisner, but was also loyal to the Communist Bavarian Soviet, which modeled a new Red Army at the behest of Moscow. Before becoming the mustachioed face of far-right radicalism, Weber shows that Hitler was a moderate Social Democrat with sympathies for the German Communist Party (KPD).

The Treaty of Versailles is what sent Hitler over the edge. After that “dictated peace,” which ended all German assumptions of victory, Hitler began working for the army’s propaganda ministry headed by Bavarian conservative Karl Mayr (Mayr would later die in a concentration camp in 1945). Mayr sent Hitler to attend a meeting of the little known German Workers Party (DAP) in early 1919. The rest, as they say, is history.

Becoming Hitler is a great read that dispels a lot of myths that we like to tell ourselves about Hitler and the Nazis. First of all, Hitler did frequently change his views, but most of these changes were matters of tactical necessity. Originally, between 1919 and 1922, Hitler espoused anti-American, anti-British, and anti-capitalist sentiments that simultaneously blamed Jews for the domination of financial interests and Russian Bolshevism. Such anti-Semitism was very common in Europe at the time, but Hitler and others did not necessarily have a biological definition of Jewishness.

During this early epoch, Hitler agreed with British sociologist Houston Stewart Chamberlain that “Jewishness” denoted an allegiance to materialism, international capital, and decadence. Christian Germans could be “Jews,” while followers of Judaism could be “Aryans.”

Only later, after it became apparent that Hitler’s dreamed alliance between a Nazi Germany and restored Russian monarchy evaporated, did Hitler hit upon the idea of using military might to exterminate Jews and Slavs in Eastern Europe ahead of German colonization.

Throughout Becoming Hitler shows that Hitler’s main obsession was securing Germany’s future. Hitler believed that Germany could become a hegemonic power in Europe only by becoming entirely self-sustaining in terms of its economy. Every other idea flowed from this main principle.

Elsewhere, Weber’s book is riddled with interesting insights into Hitler’s influences between 1919 and 1926. The future leader of the Axis Powers took inspiration from Kemal Ataturk’s war against the Western powers in Turkey (Hitler also saw in the Ottoman Army’s Armenian genocide of 1915 as a blueprint for a future “cleansing” of Germany’s Jews) and Benito Mussolini’s “March on Rome” in 1922.

Weber also shows that White Russian and Baltic German refugees from the Russian Civil War brought with them plenty of anti-Semitic literature like the Protocols of the Elders of Zion that became must-reads for Nazi party members.

Overall, Weber’s book combines the best of popular and scholarly writing in order to make the case for why Hitler was a unique historical figure. Becoming Hitler exposes our self-made delusions about fighting against the rise of the next Hitler, but it also warns all of us that demagogues are made when societies and their elites do nothing to stabilize liberal democracy when it is in crisis. Hitler exploited the crisis of the 1920s for his political ideology, and millions of people died because of it.