Churchill's Shadow: The Life and Afterlife of Winston Churchill 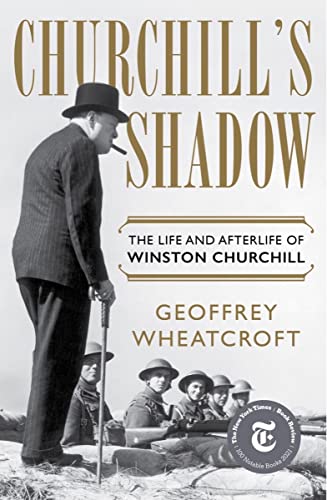 “Nothing that Wheatcroft writes can erase Churchill’s greatness. At one of the darkest hours of human history, Churchill saved Western Civilization.”

Geoffrey Wheatcroft is not the first writer to attempt to tarnish the reputation of Winston Churchill. Churchill’s Shadow is billed as revisionist history, but there is nothing new in it. Churchill’s flaws, foibles, mistakes, errors of judgment, distasteful racial attitudes, strategic follies, self-promotion, reluctance to admit errors, inconsiderate treatment of others, drinking habits, imperial attitudes, and much else that is unflattering have been fodder for his previous detractors.

Nothing that Wheatcroft writes can erase Churchill’s greatness. At one of the darkest hours of human history, Churchill saved Western Civilization. Even Wheatcroft manages to praise the Churchill of 1940 who, as John Lukacs, among others, has written, refused to parley with Hitler when much of his government thought it prudent to make a deal with the Nazis.

But Churchill’s greatness is not limited to 1940. Throughout the 1930s, during his “wilderness years” (a phrase mocked by Wheatcroft), Churchill courageously and to his political detriment sounded the alarm about Hitler to Britain and the world. When Neville Chamberlain’s government and British public opinion cheered the Munich agreement that transferred the Sudetenland to the Nazis, Churchill, almost alone, saw that Czechoslovakia was doomed and that the Western democracies had suffered an ignominious defeat.

Wheatcroft at least praises Churchill for the speeches and broadcasts he made shortly after becoming Prime Minister, and for providing inspiring leadership even as Britain suffered defeat after defeat early in the war. But he criticizes Churchill for his political courtship of the United States, ridiculing the very notion of a “special relationship” between Britain and America. And even if Wheatcroft is right that the “special relationship” was more fiction than fact, Churchill’s courtship of the United States and Stalin’s Russia was simply good geopolitics.

Wheatcroft also criticizes Churchill for the various military schemes he promoted during World War II in an effort to avoid a repeat of the slaughter on the Western Front in the First World War. He uses quotes from General Alan Brooke’s diaries to support his view that Churchill was an awful and reckless strategist. Yet it was that same General Alan Brooke (Churchill’s top military adviser) who, referring to Churchill, also wrote that “I thank God I was given such an opportunity of working alongside such a man, and of having my eyes opened to the fact that occasionally such supermen exist on this earth.”

In that earlier war, when Churchill was First Lord of the Admiralty, he championed the Dardanelles Campaign as a means of circumventing trench warfare in Northwest Europe. It was a dismal failure that cost Churchill his office and reputation.

Wheatcroft criticizes Churchill’s effort to defend his actions and decisions in the Dardanelles debacle in The World Crisis, his multi-volume history of the First World War. Wheatcroft and others have noted that Churchill’s works of “history” about both world wars are written from Churchill’s perspective, but aren’t all histories written from the authors’ perspectives?

Wheatcroft’s criticism extends to Churchill’s use of a team of researchers and writers in producing his most acclaimed work, the six-volumes of the Second World War, for which he won the Nobel Prize for Literature. This, too, is old ground covered by David Reynolds’ In Command of History. The most praise Wheatcroft offers is to describe Churchill as “a wonderfully successful story-teller.”

Part of that storytelling, according to Wheatcroft, is Churchill’s emphasis on the Anglo-American contribution to Hitler’s defeat, when in fact the Soviet Union’s contribution was much greater. So it was. And he blames Churchill for pursuing a strategy—delaying the Anglo-American Canadian invasion of Northwest Europe—that ensured Soviet domination of Eastern Europe, though Wheatcroft acknowledges that one of Churchill’s reckless schemes was to invade the Balkans in an effort to have the Anglo American armies meet the Russians as far east as possible.

And then there is the Allied bombing of German cities. Here, Wheatcroft blames Churchill for deliberately killing innocent civilians supposedly under the influence of his trusted aide Professor Frederick Lindemann. But there were no precision bombs in the Second World War—and there is no such thing as a clean war even with the precision weapons of today. Perhaps General Curtis LeMay said it best: “I’ll tell you what war is about, you’ve got to kill people, and when you’ve killed enough they stop fighting.”

Wheatcroft, like Churchill did, has his own perspective—and it is very much the perspective of the philosophical Left. He writes for such leftist journals as the Guardian, The New York Review of Books, and The New Republic. He labels many conservatives (and some liberals) in both England and the United States as Churchill cultists. His book is not just a critical look at Churchill but also at those in both countries (and elsewhere) that have revered Churchill and repeatedly invoked him in more modern crises.

That is what Wheatcroft means by “Churchill’s shadow,” and he blames it for the Arab-Israeli dispute, the Vietnam War, and the more recent wars in Iraq and Afghanistan. Churchill apparently is to blame for all later political leaders who invoked the “lessons of Munich” and “appeasement” to justify policies and wars.

And he accuses America especially of having an “obsession” with Churchill. What Wheatcroft seems unable to understand is that greatness attracts, and Churchill’s greatness attracts more than that of almost any other recent historical figure. We are fortunate that the greatness of “Churchill’s shadow” still resonates with those who continue to believe that Western Civilization is worth preserving and protecting.