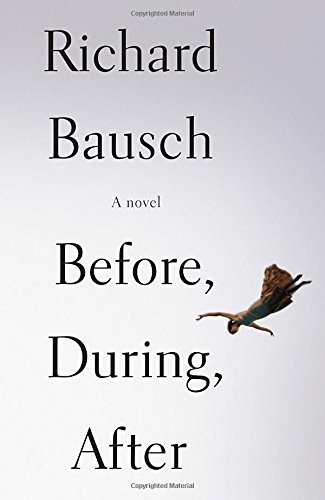 “Bausch rushes us to a conclusion that is neither convincing nor artistic. He lost his way.”

Richard Bausch, a much celebrated and prize-winning American author of 12 novels, in his latest work Before, During, After courageously tackles a difficult conundrum in fiction: how to fictionalize—that is how to make art—out of unspeakable evil taken from life.

In this instance it is the horrific and tragic events of September 11, 2001. Faced with this terror-filled event of such iconic proportions artists must ask if they can ever make art of it. Indeed, can art imitate any such moment in the flow of human history without diluting the enormity of the event and dishonoring the victims?

Picasso succeeds in this endeavor with his masterwork painting “Guernica,” perhaps the greatest anti-war artistic statement yet created. The terrors from the sky visited on the Basque people by General Franco and Adolf Hitler are present in the painting but the true genius resides in the rendering of universal suffering of humans and animals in this nihilistic nightmare.

Nobel prize winning author, J. M. Coetzee succeeds in his post-apartheid novel Disgrace as he eviscerates the passive, white oppressors of the apartheid regime, as well as black South Africans coping with the after shocks of four hundred years of racial oppression.

The same can be said of Michael Schlink’s novel The Reader set in the early years of post-Nazi Germany as the protagonists struggle with the ramifications of the burden of guilt the Nazi regime left behind amid the ruins of their once great country.

Donna Tartt won this year’s Pulitzer Prize for her superb novel, The Goldfinch. Like Bausch she portrays a current, apocalyptic terror incident in Manhattan but her creation is pure fiction.

The protagonists in Before, During, After are Natasha, an orphaned, 30-something, would-be artist working as a PA in a senator’s office in Washington, DC. Raised by her grandmother, Iris, in Memphis (after her parents’ fatal car accident), and while recovering from the end of an affair with a married man, she meets Michael. Michael, the other protagonist, is a man 20 years her senior, divorced, who recently left ministry in a church in Memphis visits an elderly relative in DC.

In the “Before” part of the book their meeting and burgeoning love affair takes flight. The novel is skillfully crafted to move in alternating sections between these protagonists, and Bausch paces the narrative well. He uses the third person omniscient narrator’s voice for both characters, and adeptly portrays their character development. It is enjoyable wandering around DC and its environs with a tourist’s eye guided by Michael and Natasha; the first part of the novel engages the reader.

Almost too hastily, Michael and Natasha plan a wedding in Memphis. Natasha packs up her life and leaves DC for a long-planned break with an older female friend in Jamaica, before joining Michael for their wedding. Michael travels to Manhattan to attend a longstanding friend’s large church wedding on Tuesday morning, September 11, 2001 at a church near the World Trade Center twin towers. A large church wedding on a Tuesday morning: a plot device certain to raise some eyebrows.

Chaos and terror ensue in this, the “During” section.

Here the best writing—taut and restrained—in the novel conveys Michael’s disbelief and frantic attempts to reach Natasha in Jamaica. Michael’s journey from hell on one of the last trains to leave NYC, at least for the following days, reignites the overwhelming emotions that shocked us then and for days after and still shock; Bausch is a powerful evocator.

Cut to Jamaica, tropical paradise, until the staggering news appears on the beachfront hotel’s solitary TV set. Phone lines to the USA jammed, flights grounded, strangers with snorkeling gear talking to one another. The dreadful day winds on. Hotel guests begin drinking alcohol in large amounts and sharing stories.

Natasha can’t reach Michael and feels abandoned (shades of her orphan past?). Tipsily, she inadvertently flirts with another guest, a Cuban American man, Nicholas Duego, now living in Orlando. Both are drunk. After a protracted struggle and ignoring her protests, Duego rapes her. (This is where Bausch’s artistry begins to fall apart.)

Rape is not the subject in this review and can never be condoned, but to draw a parallel between Duego’s penetration of Natasha, and the penetration of two enormous jets into the Twin Towers is so contrived a device, so obvious, that I lost interest in the novel. This was regrettable because parts one and two fill less than one third of the book, so there was much more to read.

Let’s return to Coetzee’s Disgrace for a moment. His novel’s plot is complete unto itself. Satisfactory in every way. Only at the conclusion do we realize that David represents the moral blindness of many white South Africans as he undergoes a journey of redemption. His daughter Lucy adapts to the new realities, is impregnated, and carries a tiny shoot of possible life in the new South Africa. Petrus, the dog-man, who works for Lucy, and whose ancestors lived on the land, albeit latterly as peasant-serfs, emerges as the true possessor of the nascent “rainbow nation.” As Lucy’s notional husband, Petrus, now rooted fully in his ancestral home, personifies the face of South Africa. There is a rape here, too, a climatic scene, a horrible rape. But as Lucy, the victim, understands the incident, her rapists are young men symbolically claiming their land and planting their seed, and she is their new territory. Coetzee seamlessly weaves these strands.

Not so unfortunately with Bausch in Before, During, After, especially in the long “After” section. Sadly, in Bausch’s novel this section becomes almost another book sketchily drawn. Natasha’s inability to cope with the rape, her role in it, and the psychological damage and repercussions of it, damage her almost irretrievably. It will take years of therapy to ameliorate her guilt and anguish. The continuing post-traumatic stress on the United States after experiencing the destruction and witnessing thousands of innocent deaths on the eponymous September 11, fades from the novel, and the almost soap-opera–like treatment of Natasha’s concerns become all-consuming. This shift is contrived and unsatisfactory. Bausch rushes us to a conclusion that is neither convincing nor artistic. He lost his way.