Something Red: A Novel 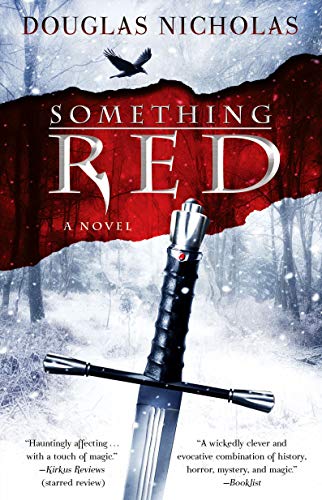 There are probably tens of thousands of Americans whose parents, grandparents, or great-grandparents were members of the Communist Party and its affiliated organizations in the nineteen twenties, thirties, and forties, and a very high percentage of them are Jewish. This reviewer recalls, when he was a teenager in Hebrew school forty years ago, a student rabbi’s interpretation the fourth stanza of the Simon and Garfunkel song “Mrs. Robinson” as a reference to that Communist Party legacy:

“Hide it in a hiding place where no one ever goes Put it in your pantry with your cupcakes. It’s a little secret, just the Robinsons’ affair.
Most of all, you’ve got to hide it from the kids.” Jennifer Gilmore’s novel Something Red explores the shadow that legacy casts over one Jewish American family in the Maryland suburbs of Washington, D.C. between late summer 1979 and early spring 1980.

Dennis and Sharon Goldstein are, to all appearances, an ordinary suburban couple. Dennis, a work obsessed career civil servant, is an Undersecretary of Agriculture responsible for negotiating grain sales to the Soviet Union. Sharon is a caterer undergoing a midlife crisis who has joined a cult like personal empowerment program called LEAP! They are also parents to two teenagers: Benjamin, who will be starting college that fall, and anorexic-bulemic Vanessa, a fan of punk music (readers will find a familiarity with the period’s pop music advantageous) who is entering her sophomore year of high school.

Sharon’s parents and Dennis’ father are products of Manhattan’s Lower East Side. Dennis’s mother Tatti is a former Soviet musician who defected to the United States as a young adult and the reason Dennis speaks fluent Russian. Tatti first met Dennis’ father Sigmund, a CCNY alumnus, at a Communist Party gathering, but she would go on to campaign for FDR, and after the Hitler-Stalin pact of 1939 he left the party and became a Trotskyite writer and activist who publishes articles in Dissent magazine and the Yiddish language newspaper The Forward and bemoans his former classmates’ and fellow New York intellectuals’ conversion to conservatism.

Sharon’s parents, Herbert and Helen Weissman, escaped the Lower East Side and settled in Los Angeles where Herb produced westerns and where both he and Helen became ostentatiously patriotic anti-communists and, more recently, religiously observant. When Julius and Ethel Rosenberg were executed in 1953, Herb and Helen hosted a barbeque to celebrate.

For Tatti and Sigmund, as well as for this reviewer’s relatives and most left-leaning Jewish-Americans, the Rosenbergs were martyrs; conclusive proof of Julius’ guilt was not released until after the fall of the Soviet Union. The Rosenberg case is a recurring motif in Something Red. For example:

“Sharon knew she should have reached out and touched him, even the lightest graze of his wrist, but she did not. She thought of Ethel Rosenberg—Why hadn’t that woman spoken up after they’d killed her husband? She had a moment when she could have saved herself. Her husband was already dead; he would hardly have known. Had she no concern for her children? It seemed to Sharon, she’d need only have whispered a word and she would be released. But what then would her children have thought? Because now they believed she was a hero. Still her children were on the news, fighting for their parent’s innocence. Perhaps, Sharon thought, Ethel Rosenberg had also been looking for a miracle. It was the very opposite of LEAP!ism, but maybe we all have been searching for miracles, Sharon thought, only we’ve been calling them wishes. Or prayers.”

Sharon’s own children are also searching. When she’s not starving herself Vanessa is trying to become a vegetarian. Benjamin, a soccer jock, has surprised his fellow athletes by choosing to attend Brandeis University—hardly a sports powerhouse with only division three teams—because he wants to emulate his paternal grandfather’s political activism, and a decade or two earlier Brandeis had been a hotbed of political activity. He also eschews the cheerleaders and female athletes that had been the staple of his high school sexual diet in favor of Rachel Feinglass, a short, fat, very smart, grounded, and together Deadhead with whom he begins his first serious relationship.

Some of Something Red’s best passages describe family relationships. Vanessa, an early Gen Xer, is both amused and repulsed by her Baby Boomer brother’s nostalgia for the sixties. Gilmore movingly captures the dynamics of the siblings’ relationship showing any first-born reader what it must be like to follow in an older sibling’s wake:

“In front of her Benjamin sat intertwined with his girlfriend, and Vanessa watched him tip his head onto Rachel’s shoulder. He ran her hand through his tangled hair. Normally this would have caused Vanessa untold annoyance, yet today it seemed sweet to her that her brother was in love. One day it will be me, Vanessa thought, just as she had each time her brother had biked ahead or driven away or swum farther out to sea. The feeling never left her, and just now as she felt that nuanced pain at the tip of her heart that told her, let him go on ahead, it’s okay, one day it will be you who gets to the center of the ocean first, she knew that her brother wasn’t going back. He would stay on this bus for as long as it, like Rachel, would hold him.”

“Sharon remembered her father as he’d been when she was little, his head full of chestnut brown hair, eyes twinkling, unaltered by impending fear, as he bent toward her on one of the few nights he had put her to bed. She had curled into the reverse V made by his arm and his chest like a humming cat, and he’d told her the story of the Snow Maiden. Sharon looked down at the daughter she had created, her left shoulder wet from Vanessa’s quiet tears, and her daughter’s youth seemed as ephemeral as a snow angel’s, just as hers had been.”

All of the passages quoted above are from the second half of Something Red. This reader experienced some resistance at the outset. Dennis’ preoccupation with his job makes him initially seem one-dimensional. In the sex scenes, the female characters’ experience of the act seems more sensual than erotically gratifying. The workaholic husband/neglected wife theme seems like a cliché—which Gilmore acknowledges when Sharon tells herself it does not excuse her extramarital affair.

Manhattan’s Lower East Side as the Jewish-American Ur neighborhood also seems like a cliché (all the more so Tatti and Sigmund’s Orchard Street address, which enables Gilmore to place them around the corner from Ethel Rosenberg’s mother). By the early decades of the 20th century, Jewish New Yorkers were fleeing the claustrophobic tenements of lower Manhattan for lower density neighborhoods in the Bronx and Brooklyn (during his New York sojourn from 1906–1917 Trotsky lived in the Bronx). The small window Gilmore describes over Tatti and Sigmund’s kitchen sink is implausible in an Orchard Street tenement where kitchen sinks invariably face an interior wall. Has Gilmore ever been in an Orchard Street tenement, and if so does she really believe that people of Tatti and Sigmund’s education and tastes would raise their children in a two-room flat whose hallway bathroom is shared by three other apartments?

Gilmore also seems unclear as to the respective jurisdictions of the CIA and FBI, portraying the former engaging in domestic investigations and arresting U.S. citizens on American soil. On the other hand when a character mistakenly refers to the predecessor of the KGB as the NKGB, Gilmore expects the reader to know that the earlier Soviet intelligence agency was in fact the NKVD.

The chapter titles are superfluous, but they are easy to ignore. Yet by the second third of the book this reviewer was sufficiently caught up in the narrative flow to overlook these details, and read the final third with its surprise disclosures almost without interruption, crying reading its final pages.

Gilmore’s characters, especially Sharon, tend to interrupt the flow of the narrative with internal discourses, daydreams, and reminiscences that fill in the back-story. Introspective readers with ADD will recognize and appreciate such thought processes, though more linear thinkers might not, yet compared to much post-modern fiction, this is a mostly chronological novel. Gilmore demonstrates her temporal virtuosity in a pair of consecutive chapters each of which, Rashomon like, tell the same sequence of events from the two participants’ separate perspectives.