Advocating Overlord: The D-Day Strategy and the Atomic Bomb 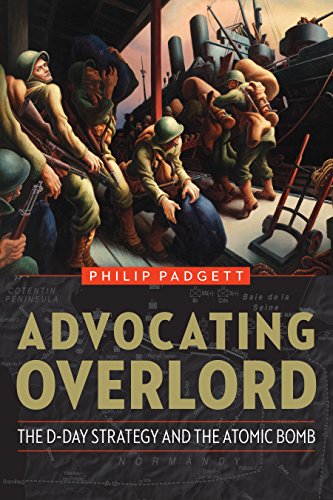 D-Day and its aftermath have been described in hundreds of books and articles. Hollywood has contributed to our nation’s understanding of the momentous battle in films like Saving Private Ryan and The Longest Day.

Many Americans, including this reviewer, have an intimate connection to this story. My father, Frank Sempa, was an infantry sergeant with the 29th Division during World War II. He and his regiment trained in England and Scotland in 1943 and early 1944 for their roles in Operation Overlord.

My father’s regiment landed on Omaha Beach on June 7, 1944 (D-Day plus one), then engaged in the ferocious battle of the hedgerows beyond the beaches to St Lo, and laid siege to the port of Brest on the Brittany Peninsula, before breaching the Siegfried Line and assaulting the German homeland.

Advocating Overlord, Philip Padgett’s first book, tells the story of the planning, logistics, diplomacy, and strategic debate among U.S. and British political and military leaders in the 12 months preceding D-Day. Padgett recounts that the path to D-Day was “neither straight nor certain,” and involved intense debate and rivalry between Allied leaders and within the armed forces of the U.S. and Britain.

The debate within the Allied leadership about the best strategy for winning the Second World War has long been known to historians; Padgett breaks no new ground here. Throughout the war, the U.S. and British generals and admirals that comprised the Combined Chiefs of Staff were, in Padgett’s words, “mired in distrust and acrimony.”

Britain’s leaders, most especially Prime Minister Winston Churchill, preferred a Mediterranean strategy that would hopefully avoid a repeat of the horrific casualties suffered on the Western front in the First World War.

Padgett points out that Britain until well into 1943 had its way, with amphibious invasions of North Africa, Sicily, and Italy. Churchill called Italy the “soft underbelly” of Europe, but the fighting there proved to be a slugfest with memorable and costly battles at Salerno, Anzio, and Monte Casino.

Allied strategy was shaped by decisions made at various wartime conferences codenamed Trident, Symbol, Sextant, Eureka, and Quadrant in 1943.

Padgett rightly highlights the important contributions of key but largely unheralded Allied military planners such as U.S. Major General Thomas Handy and British Lt. General Frederick Morgan. He also explains the importance of victory in the Battle of the Atlantic, intelligence breakthroughs, and the Allied bomber offensive to the success of Overlord.

The most intriguing part of the book is Padgett’s attempt to prove a link between Overlord and Allied cooperation on the atomic bomb project. He states at the outset that “The American determination, with key British supporters, to base Allied strategy for Europe on a cross-Channel assault and Churchill’s need to reestablish Anglo-American collaboration on atomic weapons . . . did become the two sides of a quid pro quo.”

He suggests that this British-American quid pro quo was reached at the Quadrant Conference in Quebec. But there is no direct proof of a quid pro quo, and there is no evidence that one decision was directly related to the other.

Instead, Padgett relies on what he calls “an intentional, step-by-step elevation of the question of resuming atomic cooperation with a concurrent awareness of the need to settle on strategy.” It is an interesting hypothesis, but the author’s circumstantial evidence and inferences fall short of proving the link.

That said, Advocating Overlord is a welcome reminder of what can be accomplished when allied nations’ military and political leaders overcome national biases and rivalries to recognize common interests. It also reminds us that, to paraphrase the great British Foreign Minister Lord Palmerston, nations have no eternal friends and no eternal enemies, only eternal interests.