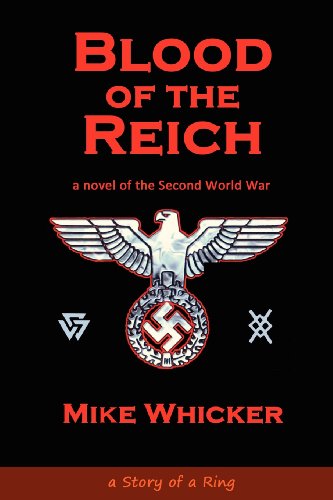 “Author Dietrich’s background as a naturalist and historian allow him to successfully create outlandish plots against authentic, real world settings, and it is that richness of historical data that catapults Blood of the Reich into action from page one. . . . a barnstorming novel that sets its sights high and never fails to deliver.”

There are book reviewers predisposed to like a book by the title alone. When the good folks at the New York Journal of Books offered to send me this book, it was because I’d already reviewed an earlier book by the same author and liked it a great deal. Ah, yes, William Dietrich, the fellow who created that Revolutionary version of Indiana Jones in his first book, Napoleon’s Hero.

Would this new standalone offering, Blood of the Reich, provide a fun and engaging reading experience?

Read the marketing copy, and you’ll be hooked: Nazis scientists are racing to Tibet in hopes of finding a hidden mystical power in the lost city of Shambhala. These plot elements scream pulp pleasure—my kind of book. Author Dietrich’s background as a naturalist and historian allow him to successfully create outlandish plots against authentic, real world settings, and it is that richness of historical data that catapults Blood of the Reich into action from page one.

In 1938 Kurt Raeder, a German archeologist, is given an assignment by Hitler’s personal advisor, SS Chief Heinrich Himmler. Raeder and a handful of loyal Nazis scientists are to travel to Tibet, seek out the lost city of Shambhala, and there retrieve an ancient power known as Vril.

Himmler and the members of the arcane Thule Society believe this Vril could tip the balance of the coming war in Germany’s favor and fulfill Hitler’s mad dreams of a Third Reich world conquest.

Raeder is an intellectual sadist, and the temptation to achieve personal glory, maybe even immortality, through the success of such an undertaking is much too great for him to resist. And so the mission is launched.

At the same time, American intelligence agencies discover Raeder’s purpose and recruit their own academic agent, zoologist Benjamin Hood, to go after the Nazis and beat them at their own game. Failing that, he is to sabotage their efforts and assure Vril never becomes a German weapon.

Now this rollicking race across the world is exciting enough but Deitrich ups the ante by creating a second storyline, this one taking place today. Rominy Pickett is a computer publicist living in Seattle when she is kidnapped by a mysterious, handsome journalist, who claims her life is in danger from neoNazis. They believe her to be the great granddaughter of Benjamin Hood.

These wannabe Nazis have uncovered the records of Raeder’s Tibetan mission and hope Rominy will lead them to rediscover what was found in those rugged mountains back in 1938. Thus is a smart, witty, normal young woman suddenly hurled head first into a life-or-death race around the globe accompanied by a charismatic stranger who appears to be a physical embodiment of all her romantic fantasies. But is he really her knight in shining armor or someone with ulterior motives using her to achieve his own dark agenda?

Blood of the Reich is a barnstorming novel that sets its sights high and never fails to deliver.

A singular criticism: The convoluted mystery of Rominy’s past and her evolution from frightened victim to pistol toting survivalist challenges even a willing suspension of disbelief. Mr. Deitrich’s prose is much more accomplished when covering the 1930s; whereas his modern sequences aren’t as assured; nonethless, this book has so much pulp richness within its pages, it must be enthusiastically recommended.

It would make one hell of a great film.