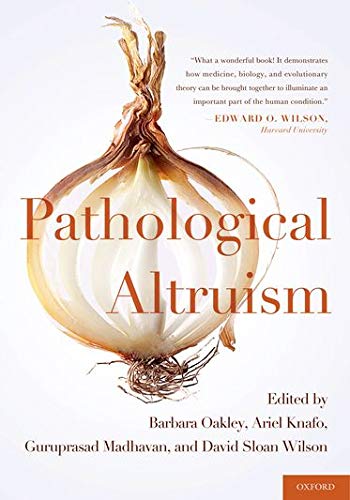 “Though Pathological Altruism may not be fodder for the leisure reading public, it will lead the way for future investigators and scientists to open the doors of inquiry into a new and most interesting field of inquiry. It is well done, reader friendly, and highly praised by leaders in the scientific and educational communities. I will add my praise to those and recommend it highly.”

America has long been a society of individuals who have valued the many positive aspects of altruism, a behavioral trait that on its surface would be extremely desirable. That being the case, it behooves one to question how others can refer to any negative facets of that same quality as being “the backdoor to hell.”

Pathological Altruism presents a number of new, thought-provoking issues that explore a range of harmful effects of altruism and empathy. Barbara Oakley and her collaborators show how altruism can ricochet into unintended, excessive, self-righteous, or self-serving pathologies.

An emerging field of inquiry focusing on the negative aspects of altruism may sound heretical to the unquestioning mind, but consider the old axiom, “No good deed goes unpunished.” It may give one pause to wonder if anything so good can help but have a downside. Perhaps this type of thinking entered the minds of the many qualified contributors to this book, drawn from the ranks of psychiatry, psychology, and philosophy along with their peers in other health and society related fields, as they shed light on a darker side of our penchant toward altruism.

This darker aspect of altruism can be subverted to a wide range of pathologies, among them: survivor guilt, drug codependency, personality disorders, and eating disorders.

The discerning eye can detect early in life that some toddlers may focus on pleasing others to the detriment of themselves. Indeed this behavior has been scientifically studied as the toddler’s personality begins to develop.

Symptoms have been noted to increase with age as positive aspects of a child’s development tends to be outweighed by negative psychological or emotional symptoms including a tendency toward worry or unhappiness, becoming fearful or overly nervous.

In suggesting a working concept of pathological altruism, the authors consider motivation of the altruist as important; he is sincere in executing the altruistic acts but then unintentionally harms the person or group targeted, or may even become the victim of his own actions.

History has shown that some of humankind’s most horrific episodes have sprung from well-meaning altruistic tendencies. Actions that we may perceive as being pure evil at times may be regarded by the perpetrator as self-sacrifice under the guise of some delusional cause. Suicide bombers, terrorists, messianic cult leaders guiding their following to self-destruction—all usually think of their atrocious acts as beneficial to humanity at the cost of self-deprecation. So did Adolf Hitler.

From the reader’s standpoint, this book is interesting to read and readily compare the many broad-based concepts and behaviors that can be explained from a single field of inquiry.

One topic that may prove to be beneficial to anyone dealing with family dynamics, and that certainly caught this reviewer’s eye, is the chapter on codependency. Several different views of codependency are discussed, none of which are immediately embraced from a scientific stance due to the inability to prove any author’s thesis as being true empirically.

However, the observational data and experiential interactions, explained through the concept of a Contextual Behavioral Science approach, do not emphasize the intention of the person either to help or to be selfish. The focus falls more on the verbal contexts wherein certain forms of behavior can be selected by the altruist, leading to pathological altruism given the right conditions.

Little direct research of pathological altruism from a CBS perspective has been done; thus the present analysis is considered more of a guide for subsequent investigations than proof of its efficacy.

Though Pathological Altruism may not be fodder for the leisure reading public, it will lead the way for future investigators and scientists to open the doors of inquiry into a new and most interesting field of inquiry. It is well done, reader friendly, and highly praised by leaders in the scientific and educational communities. I will add my praise to those and recommend it highly.