The Inevitability of Tragedy: Henry Kissinger and His World 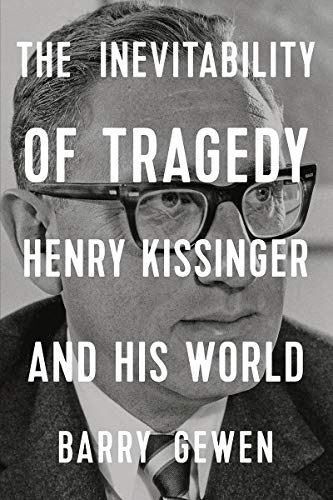 “Gewen presents a vivid, insightful, but unsparing portrait of Kissinger’s intellectual development and boundless ambition as he journeyed from Nazi Germany, to the U.S. Army, to academia, to the inner circles of power in Washington.”

Henry Kissinger recently celebrated his 97th birthday. He has contributed to the intellectual debate and the practice of U.S. foreign policy since the early 1950s. He served as National Security Adviser and Secretary of State to Presidents Nixon and Ford, and has advised every American president from Eisenhower to Trump. He is the author of seminal books on history and diplomacy. And because of the Vietnam War and détente with the Soviet Union, he is both hated and admired.

Barry Gewen, a longtime editor of The New York Times Book Review, is one of Kissinger’s admirers, but not an uncritical one. In The Inevitability of Tragedy: Henry Kissinger and His World, Gewen presents a vivid, insightful, but unsparing portrait of Kissinger’s intellectual development and boundless ambition as he journeyed from Nazi Germany, to the U.S. Army, to academia, to the inner circles of power in Washington.

Gewen traces Kissinger’s worldview to his formative years as a young German Jew who witnessed the collapse of the Weimar Republic and watched Hitler gain power by democratic means, impose brutal totalitarian rule in Germany, and plunge the world into the most destructive war in history.  At least 13 members of Kissinger’s family perished in the Holocaust. Tragedy was everywhere. Unsurprisingly, Kissinger became a foreign policy “realist.”

That “realism,” Gewen believes, had its roots in Germany of the 1920s and 1930s. Other German-Jewish intellectuals that emerged from the same cultural and historical milieu developed worldviews similar to Kissinger’s. The author presents lengthy, detailed chapters on Leo Strauss, Hannah Arendt, and Hans Morgenthau—so lengthy and detailed that the book is effectively a multi-subject biography. Gewen does this for a reason: to help explain the constraints that power and circumstances impose on those, like Kissinger, who formulate and implement foreign policy.

Strauss, Arendt, Morgenthau, and Kissinger all understood that history was not a study of the linear progression of man. All knew from experience that democracy was not the “end of history” and that human nature was not perfectible. History proved that humans did not act based on reason alone—emotion, greed, avarice, and ambition were constants of the human condition. Abstract ideas divorced from history often led to disaster. The road to hell was frequently paved by good intentions.

These “realists” all were anti-utopian. They all believed that international relations occurred in a Hobbesian world of anarchic states that struggled for power and survival. Good intentions counted for nothing. The only thing certain in international politics was uncertainty. Moralism was not only useless, but also dangerous as a basis for policy.

Gewen reflects on Strauss’s writings on the great philosophers (Plato, Aristotle, Spinoza, Hobbes, Nietzsche), Arendt’s The Origins of Totalitarianism and On Revolution, and Morgenthau’s Scientific Man Versus Power Politics, Politics Among Nations, and The Purpose of American Politics. He spends the most time analyzing Morgenthau, perhaps because Morgenthau had the closest relationship with Kissinger.

Morgenthau, Gewen claims, was the “father” of “realism,” but that ignores the earlier realist writings of the Dutch American Nicholas Spykman and the great American naval historian and strategist Alfred Thayer Mahan. Indeed, American foreign policy realism can be traced back to Alexander Hamilton and John Quincy Adams. “Realism” is not exclusive to European thinkers and statesmen.

Kissinger’s realism, as Neil Ferguson has so brilliantly explained, first manifested itself in his undergraduate thesis on Spengler, Kant, and Toynbee, and later in his doctoral thesis that was published under the title A World Restored: Metternich, Castlereagh and the Problems of Peace, 1812–22. The book that made Kissinger famous, however, was Nuclear Weapons and Foreign Policy, in which he wrote about the unthinkable—planning, fighting, and winning a limited nuclear war.

Kissinger wanted to be more than a scholar. He wanted his ideas to influence government policy. He became an adviser to Nelson Rockefeller, a moderate New York Republican who had presidential ambitions. Kissinger traveled frequently between Harvard and Washington, D.C. He developed important relationships in the nation’s capital. In the 1968 campaign, he deviously made himself available to the presidential campaigns of both Hubert Humphrey and Nixon.

Kissinger’s reputation as a foreign policy realist and his political connections were such that Nixon offered him the National Security Adviser position even though they had no previous personal relationship, and Kissinger had been openly critical of Nixon. The two men, however, viewed the world similarly. Kissinger would write later that Nixon understood global politics better than any U.S. president with the possible exception of Theodore Roosevelt.

Kissinger brought his realist worldview—a worldview that he shared with Richard Nixon—to policymaking between 1969 and 1976. Together, Nixon and Kissinger opened diplomacy with Communist China, forged détente with the Soviet Union, shaped a Middle East Peace in the wake of the Yom Kippur War, and concluded America’s involvement in the Vietnam War.

Gewen’s first chapter, however, discusses Kissinger’s approach to Chile after Salvador Allende was elected President of the South American nation—an approach for which Kissinger has been unfairly called a “war criminal.” Allende was a far Left, anti-American political leader like Cuba’s Fidel Castro. For Kissinger, that fact overrode any abstract commitment to democratic elections. Allende’s ouster was in the United States’ national interest—that was all that mattered.

The tragedy of the Vietnam War, Gewen notes, was evident to Kissinger even before he assumed responsibility for attempting to end it “honorably.” Kissinger had been to Vietnam as an observer during the Johnson administration and didn’t like what he saw. The Nixon administration inherited a debacle and looked for ways to end it without suffering diminished credibility.

The notion that U.S. credibility had been at stake in Vietnam has been ridiculed to such an extent that it has become part of the conventional wisdom about the war. Gewen thinks otherwise. “The loss of U.S. credibility, the damage to American prestige,” he writes, “ . . . were considerations that no American president could ignore.” When the United States put 500,000 troops on the ground, he continued, it “had put its credibility on the line.”

Nixon and Kissinger anguished over how to end the war without damaging U.S. credibility. In the end, they failed. The United States lost the war and its credibility was damaged. Gewen fails to note that in the wake of Vietnam, the Soviet Union went on the geopolitical offensive in many parts of the world. Détente with the Soviet Union collapsed by the end of the decade.

Gewen praises the Nixon-Kissinger policy of détente as a “realist” triumph that was undermined by critics on both the Left and Right of the political spectrum. But perhaps this is an example of the downside of realism. Arguably, détente—the relaxation of tensions with the Soviet Union—provided an economic and geopolitical lifeline to a dying Soviet Empire.

Realism doesn’t believe in victories. Instead, it seeks to make the best of a bad situation. Détente made the best of a bad situation. The Vietnam War produced a domestic political crisis in the United States and a crisis of confidence in our ability to shape world events. Downplaying the ideological dimension of the East-West struggle accommodated the domestic political unwillingness to compete with a massive Soviet military build-up.

In the late 1970s, now out of power, Kissinger acknowledged this dilemma but would not blame détente. Gewen does not blame détente, either. Gewen thinks détente was the epitome of realism and reserves his criticism for détente’s most influential critics—Sen. Henry Jackson (D-Wash) and the group of neoconservatives—mostly Democratic Party “hawks”—that rallied to the presidential candidacy of Ronald Reagan.

Kissinger later admitted that the fall of the Soviet Union was “a process hastened by [Reagan’s] policies.” Gewen acknowledges that Reagan perceived “the brittleness of the Soviet system” and understood “that a determined push from the United States would send it over a cliff.” Yet he also writes that “[t]iming and dumb luck were also crucial to Reagan’s success.” Gewen seems unwilling to admit that had Reagan continued détente it is unlikely that the Cold War would have ended how and when it did.

In another historically significant instance in May–June 1940, realism’s champion was British Foreign Secretary Lord Halifax who implored the war cabinet to seek accommodation with Hitler. Nazi Germany dominated Europe, was aligned with Soviet Russia, and Britain was alone. Churchill rejected the counsel of realism and thereby saved Western civilization.

Kissinger in the third volume of his magnificent memoirs contended that Nixon’s foreign policy laid the groundwork for Reagan’s strategy to win the Cold War.  In one respect—the opening to China—he was right. The Sino-Soviet split was crucial to the West’s victory in the Cold War. In another respect, however, détente helped temporarily shift the “correlation of forces” in the Soviet’s favor until Reagan reversed course.

Today, realists continue to counsel engagement with China despite its aggressive moves in the South China Sea, its military build-up, the crackdown in Hong Kong, its threats against Taiwan, and its pursuit of Eurasian preeminence via the Belt and Road Initiative. Realists, as they did with the Soviet Union in the 1970s, are downplaying China’s communist ideology.

The rise of China is in a sense a reaffirmation of realism’s teachings. China served as a de facto U.S. ally against the Soviet Union. Our engagement with it has helped it to grow into an economic and military great power, and now China competes with us for global preeminence. That is the way the world works. Henry Kissinger understands that.