Saving Stalin: Roosevelt, Churchill, Stalin, and the Cost of Allied Victory in Europe 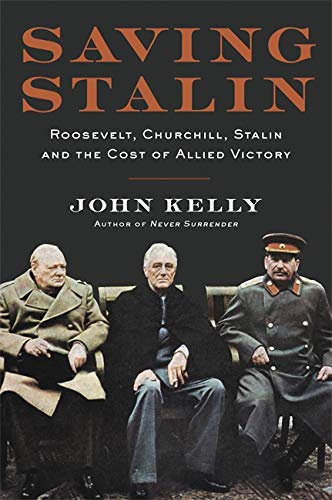 “John Kelly . . . engagingly revisits the turbulent and often strained relationships between the U.S., Britain, and Soviet Russia in their war against Nazi Germany and her Axis partners in his new book Saving Stalin.”

The story of the relationships among the Allied powers during the Second World War has been told many times. It was an alliance of convenience between the declining empire of Great Britain, the emerging Western empire of the United States, and the totalitarian Soviet empire. The Western powers aided the Soviet Union because the war situation—at least initially—necessitated it. But even before the war ended, the fault lines of the emerging Cold War were visible to those willing to see.

John Kelly, who has previously written narrative histories of the Black Death, the Irish famine, and the early stages of the Second World War, engagingly revisits the turbulent and often strained relationships between the U.S., Britain, and Soviet Russia in their war against Nazi Germany and her Axis partners in his new book Saving Stalin.

The war was preceded by a diplomatic minuet that ended with Stalin and Hitler entering into a non-aggression pact, which in reality was a mutual aggression pact in which the dictators divided-up parts of Eastern and Central Europe. After Germany attacked the Soviet Union on June 22, 1941, Stalin sought and gained assistance from the Western powers, but he had no moral claim to that assistance. But war and morality rarely fit neatly together.

British Prime Minister Winston Churchill, who had been an outspoken foe of communism since 1917, nevertheless made his bargain with the devil because he believed Britain’s survival depended on it. U.S. President Franklin Roosevelt, after Pearl Harbor and Hitler’s foolish declaration of war against America enabled him politically to become a full belligerent against Nazi Germany, extended Lend-Lease to Stalin for similar reasons.

Kelly follows the three German Army Groups as they launched their respective drives toward Leningrad, Moscow, and Kiev. In the 1930s, Stalin’s forced collectivization of agriculture and the massive purges known as the Great Terror, created domestic opponents of the regime, some of whom initially welcomed the German Armies as liberators. Nazi terror tactics quickly dispelled that notion.

In less than a month, notes Kelly, the German offensives resulted in the destruction of nearly 5,000 Soviet tanks, more than 1700 fighter aircraft, and the loss of nearly 350,000 Soviet soldiers. By August, Soviet casualties reached over 600,000. But the Russians fought on. Kelly quotes German General Franz Halder: “The Russian colossus has been underestimated by us . . . Whenever a dozen divisions are destroyed, the Russians replace them with another dozen.”

The first bombs fell on Leningrad in early September 1941. The siege of that city would last 900 days. Kiev fell on September 26th.  In November, the German Army neared Moscow. Hitler sensed victory. But then the Russian winter set in and the German Armies were not prepared for it. Soviet forces defending Moscow under Marshal Zhukov counterattacked on December 6, 1941, and the Germans began falling back. The next day, Japanese forces attacked Pearl Harbor, and a few days later Germany declared war on the United States.

President Roosevelt sent his most trusted aide Harry Hopkins to London and then Moscow to harmonize relations between the Allies. Prior to America’s entry into the war, Roosevelt and Churchill had signed the Atlantic Charter, which proclaimed their commitment to democratic ideals. The alliance with Stalin, however, was based on geopolitical realities, which in the end trumped those ideals.

The United States and Great Britain were now committed to “saving Stalin,” who was responsible for the state-created famine that cost between 7 and 11 million lives in the early 1930s; who ordered the murder of tens of thousands of communist party members and military officers during the Great Terror of the mid-to-late 1930s; who placed millions of political prisoners in the slave-labor camp system known by the Russian acronym GULAG; and who was jointly responsible with Hitler for starting the European phase of the Second World War.

During the war, Kelly notes, the Western leaders learned more about Soviet atrocities when German forces discovered the mass graves of Polish officers in the Katyn Forest. Both Churchill and Roosevelt joined Stalin in blaming Germany for the massacre, but both knew that the crime was committed by Soviet forces.

As the tide of the war turned—after Midway in the Pacific, the British-American victories in the North African desert, and Stalingrad in the east—the Allied leaders engaged in summitry in an effort to harmonize wartime strategies and to plan for the postwar world.

Kelly reviews the wartime conferences in Malta, Quebec, Casablanca, Tehran, and Yalta. Stalin’s insistence that Britain and the U.S. open a second front in Europe was met by resistance in Britain but eagerness in the United States. This led to repeated clashes between British and American military leaders, which Stalin skillfully exploited.

In the United States, Roosevelt ignored or dismissed repeated warnings that Soviet postwar aims would not only diverge from Western ideals but would also threaten Western security. Former Ambassador to Moscow William Bullitt, Generals Muir Fairchild and Hap Arnold, OSS analyst James Burnham, and Russian expert and diplomat George Kennan, among others, sought to educate Roosevelt about the emerging Cold War, to no avail. Instead, Roosevelt engaged in what Robert Nisbet called “the failed courtship” of Stalin.

Roosevelt also carelessly dismissed reports—reports that turned out to be true—that his administration had been infiltrated by Soviet agents of influence and spies. And, as Kelly notes, he frequently sided with Stalin over Churchill in disputes that arose at the wartime summits. As the war neared its end, U.S. influence increased vis-à-vis Britain’s for the simple reason that America’s contribution to the war effort vastly exceeded that of Britain’s. It would be Stalin and Roosevelt, not Churchill, who determined the contours of the postwar world.

Kelly reviews the success of Anglo-American military operations in Italy and Normandy and details the massive Soviet offensive that ultimately doomed the Nazi regime. The Soviets stormed into Berlin, raping and pillaging their way through the German capital. Hitler spent his last days in his bunker, raging at the “betrayal” by his generals and political associates, and blaming Jews and others, but not himself, for Germany’s impending defeat.

The Western powers did indeed save Stalin. Perhaps, they had no other choice under the circumstances. War and geopolitics are rarely, if ever, guided by morality.